If I were writing a one-word review, that word would be “Astounding.” But much more deserves to be said about Tantehorse‘s The Death of the Marquis de Sade & Dante, a ‘Must-See’ production at Atlas Performing Arts Center that presents the second and third parts of the Czech company’s larger Dark Trilogy.

Atlas lists Tantehorse’s run under both Dance and Theatre on its website, and even that bit of promotion shows a strong awareness of the company’s resistance to genre. Tantehorse describes themselves as “physical mime theatre,” but that description barely scratches the surface. The company blends Czech pantomime, Japanese Butoh, physical theater, and mime with modern dance and puppetry to create a type of theatre that isn’t a European style as much as it is Tantehorse’s specific modus operandi. All of the disparate production elements come together to form a beautiful, surrealism- and Baroque-inspired whole. Lighting Designer Martin Spetlik influenced by Chiaroscuro paintings, spends as much time using shadows to define the figured on stage as he does simply illuminating them. And the sound and music by Matous Hekela is done live during the performance, giving the soundtrack and the performers additional freedom in their work. Under the guidance of director Petr Bohac, Tantehorse has brought us something amazing here and the only flaw in the piece is the knowledge that we’re only getting a small glimpse of Tantehorse’s work.

There’s no narrative to summarize, which is a strength rather than a weakness. At a post-show talkback, actress and Founding Artistic Director  Miřenka Čechová said that the company prefers to let the audience build their own narratives, drawing on their own experiences and associations to construct a personal version of the performance. Instead of a narrative, Čechová and Co-Founder Radim Vizvary (the only two performers) provide a constant stream of images, metaphors, and conceptual relationships. While the two halves of the show are clearly separate pieces with their own internal aesthetics, they also create a satisfying whole based on shared themes. Both parts explore the relationship between the male and female characters, and the way that each objectifies and projects on the other. Both share a fascination with consumption as a physical and sexual act, blurring the lines between eating food and being physically intimate. And both sections display a fascination with the way that death reduces a person to their component parts and paradoxically allows them to expand and display new dimensions.

I used the word ‘astounding’ to describe the production, but there are others that are worth mentioning. The production can be grotesque, concerned as it is with the ways in which humans are reducible to bodies. The company delights in sudden turns of darkness, as when a playful clay-mask pantomime becomes affectingly sinister, like Mummenschanz by way of Clive Barker’s Hellraiser. The production is also physical in a way most theater (and even dance) barely reaches. The movements of the actors are incredibly precise and specific, but bodies function as props and sound-generators as well as sites of drama and projected longing. Breath-taking is a good term for the both the impressive physical work done by the company and the amazing images that we’re presented with. The stage-lights go down between each vignette, and I had the urge to leap to my feet in applause after each and every one. The show is also necessarily sensual, keeping the audience constantly aware of the physical nature of the performers’ bodies and their proximity to each other. And finally, the production is (offered without commentary) charmingly funny.

The Death of the Marquis de Sade & Dante is one of those energizing works of art that serves as a reminder of the fluid boundaries between artistic disciplines. It’s also a reminder of the ways that brave artists are pushing the limits of theater itself, and of the offerings available to theatergoers who are brave enough to seek them out. If you’re interested in theater, whether as an art-form for as pure entertainment, you owe it to yourself to make the time and see this show. 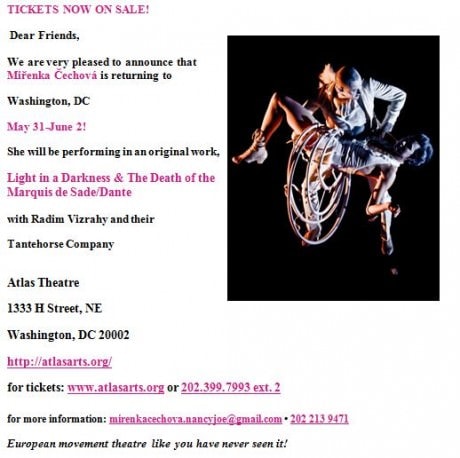