After wrapping up our first official show The Sleeping Beauty in Summer 2010, Director Matt Reckeweg started talking about the future of Pointless Theatre. At the time, it seemed as if our puppet ballet would be our biggest enterprise, but he told me about two shows that he had in the pipeline. One was Hugo Ball: A Super Spectacular Dada Adventure, which premiered at Fringe the following year, and the other was a more traditional puppet show, known at the time as The America Show. He asked me to write it, based on various American folktales “like Johnny Appleseed,” offering little extra detail.

Here we are, three years and five shows later, and our “America Show” has finally come to fruition.

I immediately knew that I wanted this to be the quintessential Americana show.  Personally, I enjoy works that attempt to capture the “essence” of its subject matter, so I tried to stick with folk tales that were most familiar to U.S. citizens through grade school history classes (although there are a few surprises along the way).  I wanted to build an “American mythology” from these legends, to serve as a narrative arc. These are stories that have been told numerous times throughout history.  How could I retell them in a way that felt both new and classic at the same time?

Having only completed Sleeping Beauty at the time, my first thought was about how we were going to use puppets in a unique way. I initially started with nine stories that charted the history of America from its inception to the turn of the century, which meant that it wouldn’t be feasible to create a specific cast of puppets for each brief tale. Our unofficial motto is “More stuff!” but even 50+ puppets would have been overkill. So my first idea was to make the puppets the actors (much as the Sleeping Beauty puppets were dancers). Each puppet would have a variety of costumes that would change between stories. As an in-script joke, I named each of these “base” puppets after Mark Twain characters. Tom Sawyer played the hero characters, Becky Thatcher played the female characters, etc. But after reviewing the first script, it was decided that this was where our focus should be. So we brought the Mark Twain elements to the forefront, resulting in Mark Twain’s Riverboat Extravaganza!

Mark Twain had always been the iconic lead of our show (although he was at first joined by a couple other narrators as well). Twain just seems to be the sole representative of American storytelling. Based on his dreams of being a steamboat captain, as well as popular American theater styles of the 19th century, placing the show on a floating vaudevillian stage was a no-brainer. If Twain were to present these tales to his contemporaries, a riverboat show would have been his medium.  His characters (Tom, Huck, Jim, and Becky) would no longer be puppets and became our human stars. Five stories were ultimately selected (including “Sleepy Hollow,“Johnny Appleseed,” and “The Ballad of John Henry”) and the puppets became historically accurate toys that Tom and his friends would have played with at the time. 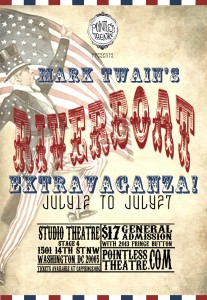 The vaudeville idea influenced the structure of the piece, becoming something like a “Muppet-Show-esque” variety show with singing, dancing, and poetry in addition to the stories. We have adopted many styles of puppetry to add variety to the tales, including some techniques that are a first for our company. Marionettes, shadow puppets, and even a ventriloquist dummy have found their way into the show. All of these various elements are combined to suggest the melting pot that is American culture. Stories and styles from around the world come together to support the narrative.

The result is a look at how these stories shaped America. Why were these stories chosen to represent our culture? Tom and his friends learn about what it means to be an American hero as Twain relays the stories to them and the audience, much as he did with his own children. In classic Pointless style, this show is just as much about the people telling the story as it is the stories themselves. This show has undergone a long process, but, as they say, America wasn’t built in a day.

The artwork was created by  Evaline Huang.

Capital Fringe is a 501(c)3 nonprofit organization founded in 2005 with the purpose of connecting exploratory artists with adventurous audiences by creating outlets and spaces for creative, cutting-edge, and contemporary performance in the District. Capital Fringe’s vital programs ensure the growth and continued health of the local and regional performing arts community by helping artists become independent producers while stimulating the vibrant cultural landscape in our city. Official Hashtags: #outsidetwire #capfringe13 #CapFringeSoldOut