It’s a little bit of a gimmick.

The “tickets” are for you to find us. They are as free as you are. We’re making cool interactive happenings, live, on the streets of D.C.

If you do come to the Capital Fringe Festival this year, there is a very good chance you will find us in and around the various venues.

Known in some corners of D.C. theatre as “the fringiest show at the Fringe” (DC Theatre Scene, 2011; City Paper, 2012) — the producers of The Cloudism Project and The Battle of Fort Fringe are coming back. 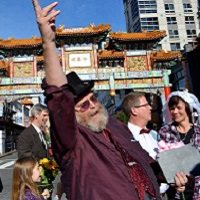 Borealis Theatre returns to Capital Fringe this year to offer yet more interactive performances — but not at any particular Fringe theatre venue. We are going to the streets this year. Our work since the beginning of our company has been inspired by the “flash mobs” phenomenon and Improv Everywhere as much as the work of Yoko Ono, John Cage, and Allan Kaprow.

Though the intellectual and artistic challenges of our previous works have been “fringey” and often abstract, the alternative total immediacy and directness of this summer’s performances will offer us all new challenges. We still aim to grow artistically free and totally engaging atmospheres and environments, sharing the creative power with our audiences, but we’re now doing it for free.

We have already begun this work with our “Crosswalk Weddings” performance. On April 29th, 2012, at H and 7th Street NW, from 4 pm to 6 pm, twenty-four couples were married — spiritually binding, these weddings were, not legally binding! All of the weddings took place in the center of the diagonal crosswalk there, right in the shadow of the Chinatown Arch. It was an event that allowed a shared giddily happy joy for two hours on the streets of D.C. — a sudden burst of light in a hardened, heavy city, this most powerful town.

But at this time, around Fringe and its vicinity, and with the company of talented and brilliant devisers that put together the first “Crosswalk Weddings”, we are offering five more happenings as well as a remount of that piece. The remount will be in the same Chinatown location, this time preceded by a theatrical bridal procession from Mount Vernon Square down 7th Street to the intersection with H Street.

We’re thrilled to be offering this summer the new “Life Size Rock Paper Scissors: We Play, You Play.” It may be exactly what it sounds like… But you, or a casual passerby, get to both watch the battle occur and help decide the outcome. You might even get a chance to be in the battle…

We have yet again several intrepid performers up to the task of not only portraying Rock, Paper, Scissors, and/or married couples, but also interacting with the live crowds of passersby and friends, all there to support the public art and shared dream of making such beautiful and surreal moments happen.

We also have four secret happenings this Fringe season, all occurring as special events to be announced on the last weekend of Fringe (the last weekend of July). We will be collecting email addresses at our various locations (offering free tickets to our events) for signing up to get flash notifications of coming up happenings and also offering as many details as we can to help you find us.

We do look forward so much to playing along in creating beauty and humor with you on the streets this summer. Here’s to a spectacular Capital Fringe Festival 2013!