On Saturday, June 23, 2013, I enjoyed a rousing good time at The British Players‘ Music Hall, the 49th anniversary of a popular event frequented by expatriates and former inhabitants of the British Isles. Once located at the British Embassy, it has relocated to Kensington Town Hall.Their major productions include comedies and dramas by British playwrights, pantomimes, musical revues, and this, the annual Old Time Music Hall.

All music hall performances follow a basic format. A “Chairman” (Malcolm Edwards, who co-directed the show with Albert Coia) acts as master of ceremonies, introducing singers, dancers, and specialty acts (comedians in this case). All that was required was a piano, a stage, audience seating, and a strategically placed bar. Drinking is a historical necessity in that the original licensure for music halls specified that public drinking was only allowed when there was entertainment. Abundant laughter, wit, and nostalgia were on display. I was told that many of the pieces were repeated from other years, and to look out for the drunk act (which I did, and which was delightful).

The evening began with an audience Sing Along. If they hadn’t been old favorites from my childhood I could still have been able to participate because the program included all the lyrics. Seated with three strangers at a little table, I could hardly avoid getting chummy with my neighbors as carafes of wine were pressed on us and renewed with vigor by vigilant serving ladies. Imagine starting the evening singing out old classics – “Daisy, Daisy,” “The Band Played On,” “Let Me Call You Sweetheart,” “Roll Out the Barell,” and “Pack up Your Troubles,” with wonderful lyrics like:

Daisy, Daisy, give me your answer do.
I’m half crazy, all for the love of you.
It won’t be a stylist marriage.
I can’t afford a carriage.
But you’ll look sweet, upon the seat
of a bicycle built for two…..and…

The jokes and the acts were mildly bawdy, and lot of fun! There were many mother-in-law jokes, an sly jokes about body parts. What do you expect from the predecessor  the Honky-Tonk and the more lavish Burlesque?

Most of the cast both sang and danced. There was a beautiful harmonizing male quartet, several female ensembles, a Can Can or two, short pantomimes, and occasionally a duet. Albert Coia was also a featured comedian, with an elastic and expressive face that could give an odd wink, a smirk, and an air of astonishment. His ‘Yo-Yo’ piece with allusions to sexual activities brought the audience back to a time when indirection was required, but everyone knew what you were hinting at. He had other bits called Wanting Young, Because, If the Missus Wants To Go, and She Cried in My Beer which were hilarious an left me and the audience wanting more.

Another featured comedian was Danny Brogan, who was celebrating his 40th year with the Players. He got an awful lot of gafffaws and applause with his pieces about bananas, straight, or otherwise.

There was so much talent in this cast and production: Kathy Suydam played an Ethel Merman forerunner, with My Kitchen Man and No One Man. Ellen Kaplan was a droll asset in her performance of Lost It at the Aster. Shawn Perry and Stephanie Offutt’s beautiful voices were on display in Simple Melodies and If I Were Not Upon the Stage. Sue Edwards played a rather top-heavy cleaner whose pretensions are punctured at just the right time by her co-worker Sarah Leembruggen in the humorous Going There Every Night.

The most fun of the evening was watching friends performing together and having a great time on the stage. That joy was infectious. Congrats to the entire production team and special kudos to the ‘Costume Team’ of Jamie Breckenrige and her crew Chrish Kresge, Clare Palace, and Joan Roseboom, and to Sue Edwards and Stephanie Miller for their toe-tapping choreography. 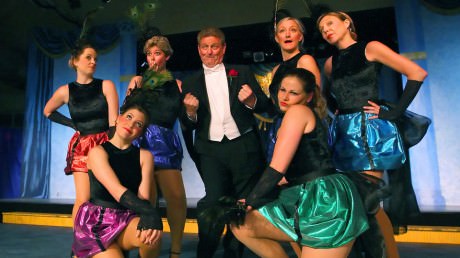