This year, We Happy Few Productions tackles the perennially-staged ROMEO AND JULIET by William Shakespeare at the Capital Fringe Festival. In 2013, which seems like the year of ROMEO AND JULIETs, why would WHF choose to perpetuate the tragedy? According to Director Hannah Todd, it’s because we like a challenge, because we can do it well, and because we’re going to give you a show you haven’t seen before. 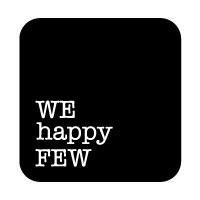 The We Happy Few treatment leaves our ROMEO AND JULIET at 90 minutes, making it fast-paced and focused. The creative doubling (and tripling and quadrupling) of roles that is now a signature of the company has the spotlight on just 8 actors. In the spirit of Fringe, WHF is making some cutting-edge artistic choices, too, while continuing their signature focus on maintaining the integrity of Shakespeare’s story, characters and text. Our Juliet, played by Raven Bonniwell, will be the sole woman in the production, showcasing not just Juliet’s struggle as a young person in love, but also her plight as a woman. With only Juliet portrayed as by a woman and all other characters – women and men – played by men, WHF explores the story of Juliet, strengthened by love, seeking to forge her own destiny in a world dominated by the wills of men.

“In this world, it’s not just that men are the people in political power; it’s not just that fathers have the ultimate say over who their daughters marry, that men have the ultimate say over who will be their wives,” Todd explains. “It’s that the wills of men – their passions, their pettiness, their jealousies, their proclivities, their whims, their violence, and their wishes – drive everything. Women’s lives are, as a rule, completely at the mercy of men. Women are so proscribed by the wills of men, we are having them actually played by men. However, the men are also prisoners of the unstable world their free reign creates. There is a ubiquitous undercurrent of machismo, of violence – manifested in the feud that underlies every interaction. The world is a powder keg – at the slightest provocation, it explodes. As Romeo and Juliet fall in love, they start to shed this world, to move into their own – but they’re pulled back both by the people around them and by their own ties to it.”

WHF’s “tagline” for the show is Friar Laurence’s line, “Women may fall when there’s no strength in men.” That “strength” is not physical strength, of which there’s plenty, but rather the strength of heart and soul it takes to lay down arms and come to a peace. Without that strength, both men and women fall.

We Happy Few was founded by Raven Bonniwell and Hannah Todd in 2012. The mission of the company is to provide “stripped-down, small cast, ensemble productions that provide unique takes on classic texts.” This mission was evident in past productions of HAMLET at last year’s Capital Fringe Festival and THE TEMPEST earlier in 2013. This production of ROMEO AND JULIET will feature Nathan James Bennett*, Chris Dinolfo*, Chris Genebach*, Kiernan McGowan, Paul Reisman*, William Vaughan, Sean Hudock* as Romeo and WHF co-founder Raven Bonniwell as Juliet. Rose Barber will design costumes, Curry Hackett, who was with us for THE TEMPEST, will design the set, and Casey Kaleba, who worked with WHF on HAMLET, will choreograph the fight scenes. Lighting Designer Jason Aufdem-Brinke, who worked on both HAMLET and THE TEMPEST, will also return.

*Equity Actors are appearing under an exclusive arrangement with Actors’ Equity Association.