There used to be a time when going to the county fair was the highlight of everyone’s summer. There’s be the agricultural and livestock show for Pop, the arts and crafts for Ma (or vice versa), and rides for the kids. But the best of all was the good ol’ fashioned live family entertainment for the whole family. It’s a rarity to find that small-town feel anywhere these days, but I found a place that will give you just that: Riverside Center Dinner Theater.

Currently playing is Ring of Fire: The Johnny Cash Musical Show, created by Richard Maltby Jr. (Ain’t Misbehavin’) and conceived by William Meade. The production is a sort of variety show loosely telling the life story of Johnny Cash’s life (his Great-Great-Great Grandfather had direct lineage to the King in London) with three females and three males taking turns performing as Johnny Cash, and filling in for all the other roles required to tell the tale. The concept and book is to be kind – problematic. A concert version of Johnny Cash’s Greatest Hits a la Smokey Joe’s Café would have served this great singer’s legacy better.

Let’s be honest, no one is coming to see the show for the book and the concept – they are coming to hear and sing along with the songs that made Johnny Cash famous – and many of them are performed: 15 songs in the first act and 18 songs in the second act – more than enough hits to make any Johnny Cash fan smile. You’ll hear, among others, “Country Boy,” “Five Feet High and Rising,” “Daddy Sang Bass,” “If I Were a Carpenter,” “Ring of Fire, “Going to Memphis,” “Folsom Prison Blues,” “A Boy Named Sue,” and “I Walk the Line,” all played well by 6 talented musicians: Ralph Davis/Alan Schlichting (Keyboard I);Ron Wehman (Keyboard II/Synthesizer);Donald Hockaday/Rusty Kennedy (Electric Bass); Casey Klein (Acoustic/Electric Guitar);Deborah Wenrich (Fiddle); and Zach Ware (Percussion) and led by Rollin E. Wehman.

Six different Johnnys sang their hearts out. Stephany Glenn and Brent Gallahan performed an inspired rendition of “Jackson” while Pat Moore rocked the house on his guitar on “Cry, Cry, Cry.” Blaine Sumler and Sarah Beth Solop gave June and Johnny’s first meeting a twinkle and Kathy Halenda belted “All Over Again.” Gaye Law’s costume design did a good job taking us from rags to riches, and Casey Klein shook the house when he stepped away from the stirring performance of the Instrumental Ensemble to give us a solo.

The ease of Ring of Fire gave it an antique, down-home feel. If you are a Johnny Cash fan you’ll enjoy the songs and the fine musicians accompanying the hard-working cast.

Running Time: Two hours and 15 minutes, plus one intermission. 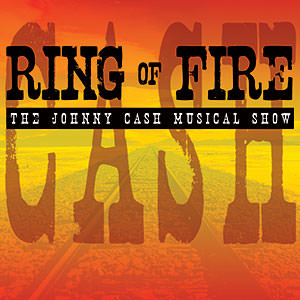