All I remember from my first encounter with Sam Shepard’s plays is that one of the characters in La Turista works and works at making sense of his plight, with all the clarifying definition language can produce, which isn’t enough definition, so he gets up and escapes the stage by running through a wall. Crashes right into and out of the sheetrock. Because some things we think and feel and want to say are inconsistent with the structures that we live in and employ for making sense of life. I don’t remember anything else about La Turista, not even that character’s name, but I’ll never forget how it felt to see a character suddenly say ‘Fuck this structure!’ and slam his body through the wall of sense into a realm that structured living doesn’t let me see: it felt thrilling. 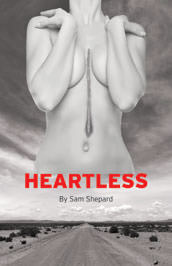 If Heartless, Shepard’s newest play, which is part of the 23rd season of the Contemporary American Theater Festival, lacks the thrill of people crashing through sheetrock, it’s not because he’s decided to keep his characters in the room until they figure out a way to fix their broken lives: it’s because the whole thing takes place in the realm beyond those structured walls.

The first clue that we’re in that realm is Director Ed Herendeen’s decision to submerge the “piercing scream — a primal cry that cracks the dirty haze of the Hollywood canyons,” according to promotional material — beneath the rhythmic sound of something running under water, something mechanical, maybe the sound of a heart, which is less dramatic and more effective than the “piercing scream” that’s supposed to awaken Roscoe. He and Sally, his new young sexy girlfriend, are asleep in separate beds, perpendicular to each other — which is another great decision. Did she hear that scream, he asks, or was he dreaming? She tells him to go walk the dog, and then she gets up and comes to the front of the stage, topless, giving us a good long look at her bare breasts, which are debreasted if you will by the scar that runs between them, from her sternum to her navel.

“You should have told me it would be like this,” she says to someone.

Sally was born with a leaky heart — her mother calls it “aortic incompetence,” a structural defect that was destined to shorten her life. But when she was ten her heart was taken out of her chest and replaced with the heart of a girl who had been murdered. “I’m glad you’re still alive,” says Sally. “Part of you.”

Sally has brought Roscoe home because he needs a place to stay while he recovers from losing his family, or abandoning them, and that act of hospitality gives the play its storyline: the stranger arrives and throws an ordered system out of whack, and then he leaves and a sort of order is restored, but not an order anybody likes.

Michael Cullen’s Roscoe is the play’s roundest character. Any man who’s ever lost a family or awakened to the middle of his life in a strange bed can see himself in Cullen’s bleary eyes and rumpled underwear. Though we learn a lot about Roscoe eventually, everything we really need to know is expressed by our meeting him first in his underwear — and by the fact that he’s not sleeping in sexy younger girlfriend’s bed. With his high forehead, stiff gray hair, and roasted voice — it sounds like his vocal chords are scorched — Cullen gives his character a lot of layers, enough to make us wonder what he’s doing there.

The other characters are archetypes. Sally’s sister Lucy, played by Cassie Beck, is a Martha fretting over Mary’s laissez-faire approach to men and clothes and life. She first appears with a tray of syringes, which she loads from vials while glaring at Sally. Her hair is tightly wrapped around her head, and her skirt is tightly wrapped around her waist and legs, and she looks eager to stab her unwrapped, nearly-naked sister with a needle. “Better take your medicine,” she says to Sally. “Don’t you want to stay alive?”

The household is controlled by the invalid matriarch, Mabel, who has all the power, even though she cannot walk or lift her arms. Kathleen Butler infuses Mabel with such willful bitterness that every time she speaks, the other characters cringe, as if they think she might be mean enough to reach right through paralysis and slap them. Moving nothing but her neck and face, Butler somehow fills the stage with motion.

Mabel is tended by a nurse named Liz (Susannah Hoffman), who says nothing in the first act of the play. “She’s mute now,” Mabel explains, “but she used to have a lovely accent.” Not mute really, it turns out, and not really under Mabel’s control, though Mabel’s disapproval makes her weep.

It seems odd to say that Sally is an archetype — the prototypical heart-transplant survivor? Perhaps it’s better to call her an idea. In an interview with Christie Evangelisto, Shepard explained that he was captivated by the idea of having someone else’e heart. “It puts the possessor of the new heart in a funny relationship to the donor, who’s of course dead but also always with them.” He imagined that circumstance as an “in-between existence where you have this sensation that [you’re] somehow between life and death. And maybe the dead are even around, in a way we don’t understand.”

Margot White played the role of Sally in the performance I saw on Sunday, after an accident sidelined Robyn Cohen, who will resume the role later in the run. White came down to Shepherdstown from New York on Friday, read the play, rehearsed it twice, and opened it on Saturday night. With her square face and her big round eyes, White manages to look both vulnerable and jaded at the same time. She performed the second act with a copy of the script in her hand, which seemed entirely consistent with the in-between existence Shepard imagined for her, as if she were both a person in her own right and somebody’s invention, in a way we don’t understand. Maybe that’s what qualifies her as an archetype.

Or maybe it’s her status as a person who has dodged her fate: a save-ling who knows that she’s been saved and is incapacitated by that knowledge for any kind of life that might merit the saving event. “Why did you save me?” Sally asks Mabel, who somehow shrugs without moving her shoulders and says, “That’s what mothers do.”

Heartless continues through July 28, 2013 at the Contemporary American Theater Festival at the Frank Center Stage – 260 University Drive, in Shepherdstown, West Virginia. For tickets, call (304) 876-3473, or order them online.