“This is an amazing production” — words of one of the visibly dazzled theatergoers following opening night’s The Wiz at Montgomery College’s Summer Dinner Theatre 2013. “Toto, we’re not in Kansas anymore” is right-on as this thoroughly entertaining production transports you to a time and place in a tale told with funk, joyous abandon, and downright fun. The original Broadway production of The Wiz was a first when it presented an all African-American cast. Summer Dinner Theater’s multi-ethnic ensemble, however, taps into the heart and soul of everybody. Directed and choreographed by Pauline S. Grossman with Musical Direction by Jenny Cartney, this fast-paced, spirited production will make you “ease on the down the road” to an enjoyable evening of musical theater.

The spectacular set design by Elizabeth Jenkins McFadden makes you feel that you had really travelled between Kansas and Oz in the blink of an eye. McFaddens’ cleverly-crafted sets and Lighting Designer Lynn Joslin’s full-stage backdrop that changes to match the color-filled scenes are strikingly dramatic in their simplicity to full effect.

The high energy of the production comes in no small part from Pauline S. Grossman’s high-kick choreography. With Ensemble movements a la Rockettes to Scarecrow’s (Kyle Louviere) leaping lizards high jumps, Mouse Ensemble’s step team marches and the whirling dervish movements of a dancing human tornado, the choreography energizes and entertains. The Ensemble has a mix of dancers of varying strengths who nonetheless dance their hearts out with athletic prowess and synchronized flow.

The vocal performances of this cast make you feel happy! The singing is so care-free that you want to sing along with them. “Everybody Rejoice” is one of those numbers. With hands thrown high in the sky, the Ensemble delivers a spirit-filled rendition that just plain makes you feel good – the reason we go to the theater in the first place.

Aunt Em played by Jasmine Hall opens the first scene with warm-honey vocals that make you remember Mama. The sassy Addaperle (Niya Norwood) along with the colorful Munchkins belt out “He’s the Wiz” forcefully but she could have been heard better with either a stronger mike or a less-powerful orchestra. This happened with a few of the other characters’ vocals.

Eviline (Nia Simone Smith) cracked me u p with a crack of her whip and her powerful rendition of “No Bad News.” She gives a solidly evil performance with strong vocals as she threatens “to put a spell on your coconuts.” The energetic opposite of Eviline, Glinda, (Jenay McNeil), delivers “Believe in Yourself” with a soprano lilt from heaven that entertains, uplifts, and inspires.

When the Fab Four, Dorothy, Scarecrow, Tinman and the Lion arrive at the Emerald City they are met by a mean ole Gatekeeper (Jonathan Miot) who threatens to steal the show. Hysterically funny, the Gatekeeper snaps at them in a German Gestapo accent that reminds you of the hilarious Kommandant of The Producers fame.

And then there’s The Wiz himself (L.J. Whalen) who struts his stuff like a cross between Mick Jagger, Wilson Pickett, and Reverend Ike. His sashaying rendition of “Believe in Yourself” is followed by a Go-to-Jesus, Sunday Service gospel-preaching shout that makes you wonder if you are flashing back to The Rocky Horror Show, The Music Man, or maybe The Preacher’s Wife.

Along the way to the Emerald City, Dorothy befriends new BFF’s and the Scarecrow proves to be one of the most animated. Scarecrow’s high jumps and wobbly legs were those of a performer who’s a great dancer with acrobatic talents. He takes us down the yellow brick road only to meet up with the Tinman (Ian A. Coleman) who’s in-need-of-Rustoleum costume and quirky/jerky dance moves make you think you are really looking at a man made out of tin. “If I Could Feel” is sung with such passionate appeal that you realize right then and there that Tinman already had the heart he so desperately desired.

The Lion, an undercover pussycat, (Kenneth L. Washington, Jr.) gives one of the strongest and funniest performances in the cast as he preens and prowls the stage as a diva-licious character that you can’t help adoring. The bad-ass, gold-chain-wearing Lion growls his way into your heart with his powerful vocals of “Mean Ole Lion”.

And the sweet young girl who just wants to go home, Dorothy, played by the amazing Awa Sal Secka, takes us there and beyond. She has a powerful, clear voice that reaches the rafters. She portrays Dorothy as a feisty but caring character and confident leader who carries this show to phenomenal heights. Dancing with a light-hearted step and joyous air but singing with depth and the power of conviction, Dorothy’s final “Home” is the showstopper we had all been waiting for.

If you are looking for a great evening of being entertained by a splendid production of musical theater – get your tickets to see The Wiz. Montgomery College’s Summer Dinner Theatre’s stunning spectacle will truly take you home.

Running Time: Approximately Two hours and 30 minutes, including one intermission. 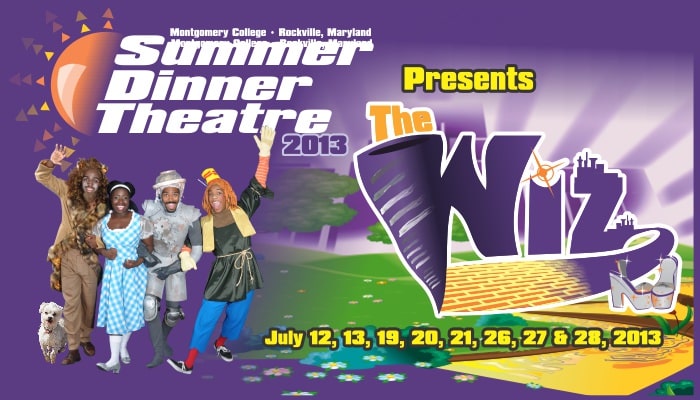