If I had left Thursday night’s performance of Modern Terrorism just thirty seconds earlier, it would be easy to write about, because the play itself is really good and the current production is even better than the script. If I had slipped out of the Marinoff Theater when the show ended and hurried home to type up my notes while I could still remember what they meant, I might simply say that it’s a comedy that won me over with its high production values, its skillful use of stereotype, and its moral center.

And I should acknowledge at the outset that Director Ed Herendeen does a tremendous job of orchestrating the actions and emotions of four tremendous actors. But because I stayed to watch the actors take their bows, I saw Mahira Kakkar, the only woman in the cast, fight hard to keep from bursting into tears, not happy ones, and the expression on her face changed what I have to say.

That emotional reaction would make sense if she had just finished performing The Crucible or Macbeth, but Modern Terrorism is genuinely funny, at least until its last ten minutes. Maybe I’d misread her face. She turned away from me, making a full revolution past the other sections of seats. When she turned back, the look was still there. It followed me home — I can still see it. Though I must acknowledge that I might be wrong about the way she feels, if I search the play for something that explains the way she looks, I start to think that Modern Terrorism isn’t merely good: it’s also dangerous.

Kakkar, whom the program notes identify as “a Kolkata-born, New York-based actress,” plays Yalda Abbasi, a Pakistani-American who belongs to a terrorist cell which is sending a suicide bomber to the observation deck of the Empire State Building tomorrow. She’s the play’s moral and emotional center, and she’s surrounded by men she disdains. When she has to look at them, her eyelids lower slowly, and then slowly — one might say reluctantly — they rise again.

And why not: Qalalaase (Royce Johnson), the leader of the group, is a glory-seeker who envisions paradise as a place where fruit causes orgasms, his younger half-brother isn’t gay, and no one mispronounces his name. He orders the components for his bombs online and keeps the FedEx tracking numbers on his laptop. Rahim (Omar Maskati), the martyr-to-be, doesn’t understand enough about his circumstances to be afraid. He watches Sleepless in Seattle to put steel into his blood. And Jerome (Kohler McKenzie), the guy who lives upstairs, embodies everything that decent Muslims, Jews, and Christians despise in American men: he’s rude, lazy, stupid, self-absorbed, provincial, thoughtless, and preoccupied with sex.

“I keep thinking I can fuck my way out of my problems,” he tells Yalda.

She wants to kill him. We would thank her if she did.

He first enters the terrorists’ apartment with a package that was mistakenly delivered to him, and though Yalda would like to kill him at once, Qalalaase orders her to let him be. Later, after Jerome has befriended Rahim, he imposes again, this time when only Yalda is home. While she’s trying to get him to leave, he asks why she wears a head scarf, asserting that since she was born in Maryland, she’s probably not required to wear one.

“No one requires me,” the moral center says. “I choose to wear hijab. I choose to express my faith in a religion with a history and spiritual purpose greater than my individual, egotistical complaints… This simple gesture brings me closer to my God. Clear enough? Does that satisfy your curiosity?”

To which the representative of popular American manhood responds: “Do you want to have sex?”

After explaining that “the only reason I haven’t beaten you to death with my shoe is out of resect for Rahim,” she asks him to leave, but he doesn’t. She asks him again, and he doesn’t, so she slaps him.

“That hurt, didn’t it,” she says. And then she kisses him. “And you enjoyed that, right?” she asks.

Yalda is a widow. Her husband was killed in Pakistan, on their wedding day, by an American drone. They had gone back to her ancestral home to be married in a traditional ceremony at her insistence. Her moral standing is beyond American reproach.

“It pisses me off that I’m angry,” she tells Rahim. “I used to have someone whose love made me safe, but now I must feel safe on my own. I miss the luxury of being scared.”

She has joined this terrorist cell to honor her husband, against the likes of Jerome, one of “those who take no responsibility for the action of their leaders,” as Rahim says. And it’s hard not to be on her side. In fact, it’s hard to be an American man, knowing that many of us are Jeromes, and not want to watch her blow his head off. When she slaps him, we think that’s a start; but then she kisses him — slaps and kisses, slaps and kisses, slaps and kisses several times. And he’s not the only one who likes the kisses. Can it be that even moral centers have a taste for America’s most vulgar charms, the ones that drive Islamists to jihad?

That might make a Kolkata-born, New York-based actress want to cry. Along with the rest of us.

Another reason to weep might be the Star Wars motif, which functions on several levels. It is first a sign of genuine American belonging. Rahim, who was born in Karachi, calls the first movie in the Star Wars franchise A New Hope.

“No one calls it that,” says Yalda. “That’s a corruption of history. You should call the original Star Wars. Just Star Wars.”

“For someone who cares about Star Wars, who remembers her father’s joy as he gathered she and her brothers and sisters to watch with him, who received this ritual as a child, Star Wars is the one true name.”

That symbol of American belonging is also a protective talisman of sorts: “What helps me when I’m afraid,” Rahim says, “is to hum the theme to Star Wars: A New Hope.” He hums the opening bars of the theme while she stares at him. “You can hear it when Luke Skywalker decides to use the Force to blow up the Empire’s giant ball ship in the Battle of Yavin. It’s my favorite moment in all six movies. Luke has just lost a friend in an x-wing, and Darth Vader is closing in, and then you hear that music –” he hums again “– and you know that good will defeat evil.” He hums further, and she joins in.

“It does make you feel safer,” she admits after a while.

That theme comes back to Yalda and Rahim in the play’s climactic moments, when they’re terrified. She has it on the new iPod he bought her, and, wanting to feel safer, knowing all is lost, they listen to it together, sharing one set of ear buds.

Should we believe that American good is about to triumph over Muslim evil? Do they believe that? Or is a false impression of safety the best that we can ever hope for? Can we tolerate the symbol of American-belonging as an analog for goodness? Is that symbol, is that analog the same thing as the essence of Jerome, and do we wind up wanting it, sheltering behind it, even when we try to blow it up? 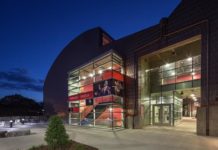 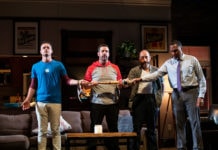 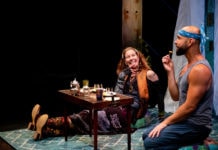