Appeasing the senses in the summertime has never been simpler than taking a stroll down to the Infinity Theatre Company as they present the charming, witty, deliciously lush 1963 romantic musical comedy She Loves Me with music and lyrics by Jerry Bock and Sheldon Harnick, with a book by Joe Masteroff.

Picture it: 1930’s Europe— Maraczek’s Parfumerie where the clerks are beautiful, the products are divine and everyone’s lives are simple and carefree. Except for the rather plain head clerk Georg who staves off the loneliness of a boring bachelor style life with love letters sent from a dear friend, whom he has never met. Enter the vivacious and eager young clerk Amalia, whom has also engaged her dreary humdrum life with letters from an anonymous love. Heated workday strife and quarrels are constant between the pair, neither ever knowing just who is on the other end of the letters. Directed by Andrew Rasmussen with Musical Direction by Tim Rosser, this spirited musical is a rare gem of a perfectly balanced book and exquisite music.

Artistic Directors Anna Roberts Ostroff and Alan Ostroff never cease to amaze audiences with their choices of older forgotten classics; bringing them to the stage with a vibrant new life and making them fit into the modern demands of professional New York City quality theatre. Their passion and commitment to the company reflects in every cast, crew, and design team member selected to work in this musical; save for driving into Annapolis you would never know you were not seated in a Broadway theatre staring at a Broadway stage. The standards at which they set their productions are tremendously high and they always land well above the mark of professional expectation.

Scenic Designer Anshuman Bhatia dazzles the sense of sight with his creation of Maraczek’s Parfumerie. At first appearing to be little more than a simple shop front, Bhatia’s design unfolds to reveal a lavish ethereal shop’s interior with shelves that stretch to the heavens, each one lined with bottles of every shape, size, and color. The magnificence of it all is breathtaking, particularly when the walls fold around to reveal the back room of the shop, and back into one tight contained space to move the play back out onto the quaint European city street. Bhatia floats the romantic atmosphere into the little café near the end of Act I with sultry satin drapes in a rich red, giving the place a simultaneous pinch of elegance and dash of daring.

With a small ensemble such a glorious sound would not be expected, but constantly keeping the audience impressed, the ensemble of this production defies expectations. Comprised of just three men and three women, when singing in full-company numbers like “Twelve Days of Christmas” and “Sounds While Selling” the ensemble creates a pristine yet plentiful sound. Members of the ensemble, under Director Andrew Rasmussen’s skillful choreographic eye, run racy routines for “A Romantic Atmosphere.” Inspired by chaos and lusty body gestures this dance routine keeps that particular scene toeing the line of grace and scandal. Rasmussen’s other choreographic work comes into play heavily during “Twelve Days of Christmas” another dance sequence that involves intense rapid movements as the song’s tempo doubles with every passing verse.

Show-stealers come in many shapes and sizes and this particular show presents for the audience’s viewing pleasure the Head Waiter (Matthew Patrick Quinn.) Playing the epitome of a foppish hoity-toity maitre d’, Quinn remains stiffly upright throughout his big moment on stage. Presenting a voice pinched with severe annoyance and a standard of perfection, Quinn owns his solo in “A Romantic Atmosphere,” and is quite the comical character, his humorous moments made that much more funny by how seriously he takes his job; a hilarious hoot of a character well worth a nod of praise.

Maraczek (Dick Decareau) is the stereotypical boss, always having an ax to grind with someone, even if it is a subtle one. He barks and bellows about this shop, putting on a plastered phony smile for customers, while burbling with bitter rage beneath the surface. Decareau does have a more lighthearted side, featured in “Days Gone By.” The gaiety of his past rises to the surface in this jaunty tune and Decareau makes a spectacle out of waltzing Georg around the shop in a fashion most amusing!

While not quite your typical ingénue character, Arpad (Jimmy Mavrikes) is an exuberant youthful character who adds a hint of sprightly glee to the performance. Bright-eyed and eager to move up in the world of the Parfumerie, Mavrikes’ character delivers a sensational solo in “Try Me,” a song which really showcases the actor’s vocal potential. Delivering crystal clear notes with a keen sense of hopeful wonder, Mavrikes engages his body fully in this song, dashing about the space with a humming energy that keeps his character lively and buoyant.

Sipos (Mark Fishback) is a paired opposite by comparison. Older, frumpy, and completely uninspired, Fishback plays the dowdy character with a true understanding of the ways of the world. Providing snippets of comic infusion to the more level moments of the production, Fishback has a keen sense of comedic timing. His robust sense of humor and unique vocal sound brings a fresh view to his song “Perspective.” Fishback adds delightful upbeat notes of commentary to the situation as it unfolds and makes him a character that the audience is easily able to love.

Not so of the unctuous Kodaly (Matthew Amira). Just a touchy shady and a bit sleazy right from the beginning, Amira’s character is easily disagreeable when it comes to passing judgment. Suave, but in a way that bristles under your skin, his snakelike charm eventually wears thin with Ilona (Jackie Washam). Amira’s solo “Ilona” presents the audience with a deliciously exotic smooth voice, slithering over notions of love as he attempts to seductively serenade her. “Grand Knowing You” adds a villainous complexity to his character as he makes his departure.

Washam, as the dotty shop girl is a delight to watch. Providing equally balanced comedic moments with subtle sex appeal, she is the perfect dumb-bombshell trussed up in rich red curls. “I Resolve” is the song that transforms her character from a one-dimensional gag-relief to a fully developed person, awakening an anger deep within her that she never knew she had. Washam’s vocals in this song are far beyond impressive, belting out raw emotions from the darkest reaches of her soul, putting her metamorphosis into play. “A Trip to the Library” rounds in the fury of a scorned woman, once again showcasing the softer smitten side of her character, adding a giddy delight of new love with quirky song lyrics.

Of course the production boils down to the lovers, Georg (Adam Harrington) and Amalia (Analisa Leaming) who at times are more like sworn enemies than two characters who are completely taken with one another. The almost poisonous tongues with which they attack one another become more than humorous to everyone in the situation, their startling quarrels constant and smartly stung. But even their snappish chemistry is well formulated, making the pair irresistible. Leaming brings a stunning operatic voice to the production, belting notes in the rafters for solos like “Dear Friend.” Her skilled voice emotes more clearly than anyone else in the show, delivering sensual feelings as well as perfect pitch.

Together Leaming and Harrington an uproarious song of physical comedy called “Where’s My Shoe?” which involves a good deal of frantic chasing and rapid singing. Their voices easily meld together in both this and their slower more romantic solo featured at the Finale. And despite their initial responses to one another, the true love that radiates through their entire beings brings a twinkle to your eye as it tugs at your heartstrings bringing the show to its happy ending. 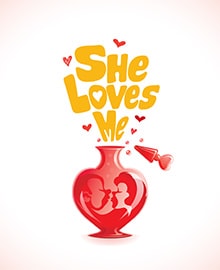 Harrington is a singing sensation, bringing a bundle of spastic nerves to “Tonight at Eight,” one of the funniest songs in the production. His anxieties soar and he gets easily flustered both physically and vocally agonizing over meeting the mystery girl of his letters. Delving deep into the dynamic nature of the character, Harrington showcases a brilliant confidence in “She Loves Me,” glowing with an incandescence that lights up the entire stage. A well sung phenomenon, delivering great justice to this impressive show.

So as they say at Maraczek’s “…thank you, please call again, do call again…” and I hope that you will. Call for the first time and many times after on this resplendent production; a true romantic comedy wrapped up in wonderful music that will have you humming with glee by the time you leave for the evening.