The Glyndon Area Players has been a summer tradition for my family for many years, whether we are in the audience, onstage, or helping behind the scenes. G.A.P. has been entertaining Baltimore County theater lovers for 17 years. This year the company, known for its elaborate sets and high caliber community theater, is presenting the Rodgers and Hammerstein classic, The King and I, directed by Deb Carson. It opens tonight.

The production is honored to have actress Liza Paredes starring as the King’s head wife, Lady Thiang. This is not Liza’s first production of the show. As a child, she performed on Broadway with the legendary and Tony Award-winning and Oscar-winning Yul Brynner. Here, Liza shares thoughts on that experience and Director Deb Carson discusses G.A.P’s production.

Teresa: How did you become involved in The King and I starring Yul Brynner, and what that experience was like?

Liza: I was only 8 years-old at the time, and I really had no experience in theater, acting or singing. My mother was encouraged by co-workers, who had seen an open casting call in the paper, to take me out for the auditions. I can remember the red sweater dress I was wearing, and the long lines of children and their parents that winded throughout The Lyric. It was said that there were over 200 children who went out for that call, and only 9 lucky kids were cast. I think my mom was more in awe of all of this than I was at first. I didn’t even know who this Yul Brynner was. Soon I got to understand the magnitude of it until my mom took me to see the show when it ended in NY. It was amazing to see the people that I had become friends with on such a magnificent stage!

Backstage at The Lyric was a lot of fun for the kids. We had our own dressing room, hair dressers, big show mirrors, make up artists and tutors for the cast that was traveling.

We did all kinds of excursions with the Broadway cast to Baltimore sites like the Aquarium, cast dinners at local restaurants, and we had a meeting with some of the stars! On stage was simply amazing, I remember the rush of being on a big black stage with the warm lights on you. When the King or other principle actors were on stage, I just wanted to be like them. It was exhausting for my mom I’m sure! But this was my very first pay check – $300 something a week! We did Wednesday matinees in addition to the weekend shows, so I remember missing school and as a child that was exciting!!

I think it wasn’t until I was a little older and as I came to know and love other Broadway plays – I realized how lucky I was to have been a part of that. I’m so grateful for that experience, because it is what inspired me to keep on singing and acting! This experience opened so many doors for me in local theater, and I don’t think I would have pursued singing or acting otherwise.

What compelled you to audition for the Glyndon Area Players’ version of The King and I? How is the production coming?

I have wanted to audition for a GAP production for a few years. I really wanted my daughters to experience that “magic” of theater that I had been so blessed to experience as a child. So when a friend of mine told me that GAP was doing The King and I, I thought what better a play for them to get their first taste of theater from than the very same one that hooked their mother so long ago? So far they love it!

How do you think audiences relate to this classic today?

The King and I is such a classic and it’s been around for so many years. I think that the story is timeless. If you have seen the musical or even the movie before, there are some beautiful songs and memorable scenes that you could enjoy over and over. For those who do not know the story of The King and I will find it intriguing as this classic is still so relatable in the modern sense. It is a blend of grand music, drama, comedy and romance.

What is your personal favorite scene to perform and why?

My personal favorite is “Something Wonderful.” The dialog feels most natural, and the song has always been my favorite in the show. I’m so happy to be performing in one of my dream roles!

Teresa: In tackling this classic that has culture clash and gender equality themes, how have you approached and interpreted it for the modern audience?

Deb: I have found that themes such as these are universal and timeless. The reality is we all possess a frame of reference for the issues presented within the context of this play. The real life, historical struggle for human rights in 1860’s Siam is the very same struggle we witness daily in our modern era. Human nature has an appeal that never truly becomes antiquated. Therefore, I have attempted to handle these issues as authentically as possible and to offer our audience a classic story that has retained its relevance well after one hundred and fifty years.

What have been the highlights of this experience for you?

Working with such tremendous talent, both on stage and behind the scenes, is always a treat. Meeting new faces and reuniting with familiars ones is a hallmark of any GAP production and I treasure the many deep friendships that have been forged in this community theater. Of course, to me, nothing rivals that moment after a summer of exhausting rehearsals when I was able to tell the cast and crew that we indeed had a show. The joy of seeing the expressions of pride and accomplishment on their faces is an incomparable feeling.

As an actress, choreographer, and psychology major, you are able to approach directing from many angles. How do your other talents inform your directing?

Spending time in these other areas has allowed me to do a good deal of perspective taking throughout the creative process. Empathy goes a long way when one is trying to balance the needs and temperaments of the individual actors with the reality of a tight rehearsal schedule that must encompass choreography, vocals, blocking, and characterization.

What scene or scenes are your favorite in The King and I?

I guess I’ve truly fallen in love with this show, because the answer to that seems to change daily. Sometimes, it’s the scene in which Lady Thiang sings “Something Wonderful,” while other days it’s that moment when the Prince finally comprehends what it is to be king, or any scene wherein the King and Anna let go of propriety and enjoy a little levity. Still, how could anyone not adore the scenes with the children? It’s a puzzlement! 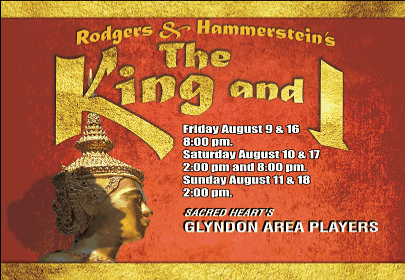 The King and I plays through August 18, 2013 at The Glyndon Players – Sacred Heart School – 63 Sacred Heart Lane, in Glyndon, Maryland. For tickets, purchase them at the door or online.