Fleet the time carelessly as they did in the golden world. Or better yet, spend it checking out the Spotlighters Theatre‘s Young Actors Academy Production of Shakespeare’s As You Like It. Directed by Janel Miley and Jonas Grey, this comedy of mistaken identities and classic Bard confusion comes to light with some talented youth performers. Under the guidance of the Young Actors Academy Teaching Staff and Assistants the students utilized a myriad of techniques, including stage combat, improvisation, mask & movement, singing and dancing to really jazz up the production. Collaborating to create a unique theme, As You Like It was set with Mardi Gras masks and streamer curtains to make the production their own.

Coaching the students in vocal and singing instruction was area Musical Director Michael Tan. Composing two of the songs featured in the production Tan worked with the students so that they could lend their voices to the Bard’s words; a clever and entertaining twist when viewing Shakespeare. Going hand in hand with the singing comes dancing, guided by Kathy Satmary, who focused on infusing jazz and tap moves into the show.

The performance as a whole was well-executed. These talented students really getting a good handle on how to express Shakespearean vernacular while making it clearly understandable for the audience. The prior experience of the students ranged anywhere from those who were vastly familiar with the Bard’s works to students who had never done a play of any sort before, but by the time they hit the stage (after a six week intensive of working during the day with the various acting teachers and only rehearsing for an hour a day thereafter) the show was pleasantly impressive.

The students showcased a keen sense of working together, building friendships and working relationships on the stage that were believable; a key point in making any show – but especially a Shakespearean show – a success. Adding to the comedy of the show was the fact that many of the female students were cast in male roles, highlighting the natural identity confusion of the play.

The thing that was most impressive about this youth production was the way the students really engaged with each other. Their lines were delivered with urgency and solid emotion. Brothers Orlando (Nate Peterson) and Oliver (Ameer Hardnett) really took to barbing at one another in the opening scene. Peterson becomes easily lovesick over Rosalind (Lily Heneghan) and is quite comical when trying to wax poetic in her direction.

Heneghan as the sought after lady in this production is extremely authentic in her line delivery, creating a naturally sharp and snippy repartee with Orlando. But she easily smooths into a very close sisterly friendship with Celia (Karinne Summers). When Summers and Heneghan get to plotting to run away with Touchstone (Emmet Sheehan) the comedy arises naturally in their dialogue and they have a romping good time as they head for the woods.

Sheehan is the epitome of comic timing in this show, delivering his lines with zest and zeal, particularly when courting Audrey (Annette Rozetti.) Sheehan’s sharp wit is well executed, his overall sense of existence on the stage quite familiar and present.

Other notable performances include the surly and rakish Duchess Frederick (Antonia Maria Jenifer) and her sweet and demure sister, Duchess Signior (Madison Mattison). Both Jenifer and Mattison ease into their roles of royalty, carrying themselves with a regal physicality and a firm but gentle hand. Jenifer spits venom while Mattison poses poetic prose, the pair as you would imagine rivaling sisters to be.

Love knows no limits when Silvius (Chloe Heles) starts pining over Phebe (Brandi Dupree). The ridiculous chase of love and love unrequited that ensues between the pair keeps the audience on its toes. Keep an eye out for both Regan Kelly and Samantha Paradise, both of these young ladies insinuating themselves into male characters and adapting a wildly appropriate physical take to the roles.

Running Time: One hour and 45 minutes, with one intermission. 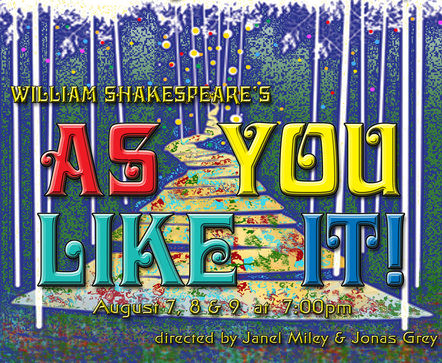