Aplauso! Little hands needed little prompting to clap gleefully in applause for children’s theater production, Gotas de Agua (Drops of Water). Kids can be a tough crowd, but this enthusiastic audience, mostly under the age of ten, was completely enthralled with this play. They were in Teatro de la Luna’s hands from the beginning. In a dramatically darkened theater, Black-Light  gloved-hands holding three world globes open the show to tell a tale that the world is in our hands, and without water, nothing would be the same. Animated, fun, funny, kid-centric/eccentric, this interactive, energetic production entertained and educated on the importance of being kind to the planet and to our water because, “without water there is no life.” 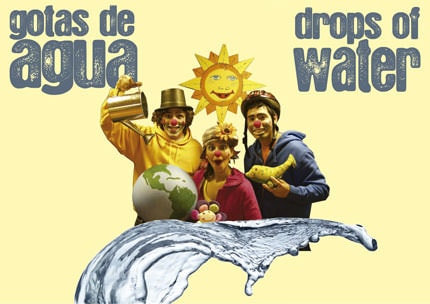 Teatro de la Luna knows something about capturing the attention of young people. Have you ever seen 3-year olds sit still long enough in the theater to actually see the show?  An Experience Theater Program, Teatro de la Luna knows exactly what amuses kids. Three clowns were the main characters who acted out the battle between good and evil – to contaminate or not to contaminate our planet and the precious water that cleanses and nourishes it.  In rapt, starry-eye attention, the kids laughed in all the right places, booed and hissed when the King of Contamination tried to destroy the  town of Gotas’s Fountain of Pure Water, and had a great time sass-mouth talking back to the dramatic conflict unfolding before them.

The story line reveals a fantasy land where a special fountain in a town called “Gotas” (“drops” in Spanish), is threatened when the fountain’s guardian, Rocia, (“dew” in Spanish) (Marcela Ferlito) is tricked by Conta, the King of Contamination (Peter Pereyra),  and he then paralyzes her so he can be free to put a virus in the fountain. In addition to littering the town with trash, Conta has designs on destroying all of Gotas’ pure water. But just in the nick of time, Hydrofriend (Alex Alburqueque) arrives to save the day when he battles with Conta, frees Rocio, and then melts Conta by spraying him with water. It was a meltdown that reminded you of when the Wicked Witch of the West got caught-up in her own pyrotechnics in the Wizard of Oz. Hydrofriend saves the magic fountain in a symbolic gesture of protecting our planet’s pure water.

The skillful actors’ consistent high energy, continuous stage movement, and overly-emoted antics keep the pace fast enough to allow an audience of young children to follow the plot without overwhelming. Several kids were picked from the audience to interact with the actors and the improvisational back-and-forth between actors and the kids was a hoot. The show was not a musical but taped music (Silvana Fierro) rocked the house at just the right moments and the actors free-style boogied to a hip hop beat.   Clown-faced with big red noses that honked, and costumed in sweat shirts, jeans and caps, the characters were lively and likable, even the devious King of Contamination.

Four large earth- blue stage panels, huge colorful flowers, and environmentally green building images set the scene for the magical town of Gotas. The set design by Alastair Sadler created a visual effect that was simple but pleasing to the eye and sent a message that cleanliness  through recycling is an important part of saving the planet.

The scene-stealer was the slow-motion mime fight between Conta and Hydrofriend. The audience squealed with delight to see the actors play-fight to save the magic fountain, and when Hydrofriend lands the final drawn out, 33 rpm speed, fist-to-face blow right before Conta’s final meltdown, the kids went wild!

Gotas de Agua was billed as Teatro de la Luna’s first bilingual play. Simultaneous Spanish-English translation, with the actors repeating what was spoken in Spanish in short-translated English phrases was how they bridged the language gap.  Unfortunately, the dialogue heavily favored the Spanish-speakers in the audience.  Many of the important lines to help understand the unfolding drama were lost to English-speakers.

Jacqueline Briceno is the playwright, director, and costume designer for this children’s production. She began collaborating with Teatro de la Luna in 1997 when she met its producers, Nucky Walder and Mario Marcel, in connection with the International Festival of Hispanic Theater.  Since then she has created four shows for the Teatro de la Luna. The Experience Theater Program is a traveling show in schools and Gotas de Agua has been on the road for the past three years. It is theater with a mission and a message for children. Grade-specific study guides with Spanis-English language instruction are part of the educational program of Teatro de la Luna. Gotas de Agua was produced with the cooperation and support of the Montgomery County Recreation Department and the Randolph Road Theater.

Running Time: About one-hour with no intermission.