The Sushi Bar in Del Ray

There’s been a fine kettle of fish brewing in Del Ray. Raw fish, that is. Jilted by the adults-only restrictions at a new sushi bar, horrified moms lit up Twitter and the Del Ray Patch’s Facebook page with blistering comments, accusing the restaurant of discriminating against their little paragons of politeness. Others claimed they were just fishing for publicity. One writer challenged the unique name of someone’s child on the comment board. While another retorted, “One day some family is going to pull a Rosa Parks on this place!” Good heavens! What was going on in hipster Del Ray, the sweet little burb where Gen-Y parents queue up with their little angels at The Dairy Godmother for soft-serve on steamy summer nights?

Here’s the skinny, if you haven’t already heard.  Six weeks ago restaurateur Mike Anderson of Mango Mike’s and Pork Barrel BBQ, opened a sushi and sake bar for adults. That’s all. If you saw the miniscule size of the place you’d realize that even one stroller could get in the way of service. There are sixteen seats at the sake bar, six stools at the sushi counter and a few banquettes along the back wall, accommodating a grand total of 45 guests who will enjoy its pleasures on weekends between 5 pm and 1:30 am and during the week from 5 till midnight. Get the picture?

The Sushi Bar’s jewel box size is its charm. It’s an intimate and relaxing spot with exceptional sushi and a well-chosen sake menu. Momokawa, from Denver, Colorado, is one such sake in the nigori style. It’s the first sake ever to be produced in the US. I enjoyed its Moonstone Asian Pear, a delicate fruit-infused sake with the unmistakable floral sweetness of the fruit that dovetailed nicely with the raw fish and smoky seaweed flavors. My partner opted for the Momokawa Pearl, an unfiltered sake that was both sharp and sweet. Other sakes are in the  ginjo & daijinjo, junmai, and nama styles.

We sat at the sushi counter with sushi master, Peter Kannasute, an abundantly cheerful fellow who delights in describing his craft. Omakase, meaning “chef’s choice”, is an option that allows the chef to dazzle the diner with a seven-course dinner that showcases his creativity. For Kannasute, that’s the highest compliment.

Fourteen years ago Kannasute came to the US from Thailand, where his family owned a restaurant in Bangkok. While attending college on Florida’s East Coast he made the decision that becoming a sushi chef was his true calling. “I asked myself what I really wanted to do,” he remembers. “I knew of one master sushi chef with his own Japanese restaurant. He hired me on and began to teach me the art of sushi. Ten years later I was the head chef.”

At age twenty-three Kannasute entered an Iron Chef-style competition at the Morikami Museum and Japanese Gardens in Delray Beach, where he went head-to-head with local leading chefs, including Jeb Bush’s private chef. “I was the only entrant who hadn’t gone to culinary school!” he recalls. “Ginger was the main ingredient. I prepared lobster rolls and won!”

Later on in his career Kannasute opened the Atlanta branch of Sushi Ra, a well-known chain of sushi restaurants, where he established himself as head sushi chef. At The Sushi Bar the young master has achieved his dream of teaching others about sushi. He expresses his philosophy in the restaurant’s logo – the Japanese symbol for ‘dream.’ “I want our all our guests’ dreams to come true too.”

Summer says G&T to a lot of us, but who knew we could keep it local? In DC a copper pot still, launching Green Hat gin – the city’s first gin since Prohibition. The distillers even craft seasonal gins like their Spring/Summer offering with floral notes of cherry blossoms. We’ll want to serve this during next year’s Cherry Blossom Festival.

At Central Michel Richard they’ve jumped on the gin bandwagon with both feet offering US made gins and those from as far away as France, England, and Scotland and using over twenty varieties in surprising concoctions to highlight its glories.

There’s California’s Distillery No. 209 Napa Valley Gin, a citrusy gin made from an original recipe from the 1860’s and distilled five times.  Or try Greenhook Ginsmiths gin out of Brooklyn, NY whose product is made from organic wheat using Tuscan juniper, elderflowers and chamomile in the blend. Berkshire Mountain Distillers, the first distillery in the Berkshires since 1911, is in the town of Great Barrington where my family had a country retreat nearby. This summer Central presents a cocktail made from the company’s “Greylock” gin. It’s called ‘Gin Blush’ and uses Campari, Chinotto, orange, and lemon to enhance its charms.

The bar at Central has a rotating menu of four cocktails that are indelibly creative.  Try a ‘Lavender Gin Rickey’ made with FEW American Gin and lavender turmeric syrup, or this one that sounds particularly appealing, ‘Summertinez,’ made with the UK-based Hayman’s Old Tom Gin, Vya Sweet Vermouth, Triple Sec, and house-made strawberry rhubarb bitters. General Manager David Hale partners with the staff to come up with new concoctions every week. Cheers to that!

Clyde’s CEO and partner, John Laytham, is reveling in half a century of success. “I don’t know of too many restaurants that have been around for fifty years or too many restaurant companies who haven’t closed a restaurant,” he remarks in his book How We Do Business, Clyde’s Primer For Beating The Odds In The Restaurant Business (Brick Tower Press). 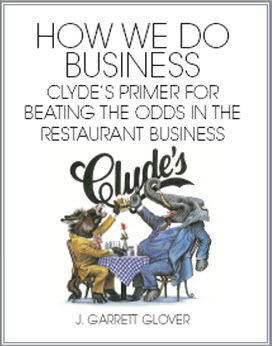 Scheduled for August release, the book chronicles the history of the company’s fourteen restaurants and is broken down into vignette conversations with the company’s founding partners who reflect on the restaurants’ proud history and their modus operandi. The late Stuart C. Davidson quoting the 4th Earl of Chesterfield, espoused the business’s core philosophy by once remarking, “Anything worth doing is worth doing well.” The company has proven that adage beyond a shadow of a doubt with an enterprise that has continued to grow and prosper.

Pages are filled with photographs of Clyde’s formative years in Georgetown. I checked to see if I was in one of them, but didn’t see myself, though I lived around the corner on Cecil Place and misspent a good bit of my reckless youth downing Bloody Marys and ripping into steak tartare amidst its red-and-white checkered tablecloths. Oh, the memories…

There are beautiful images of Old Ebbitt’s Grill and the group’s newest outpost, The Hamilton in downtown DC, a spectacular 37,000 square foot entertainment venue, restaurant, and bar that had its first incarnation as Garfinkel’s luxury department store. And even Clyde’s famous chili recipe has here been revealed. Unfortunately no photos of The Tombs tare provided, though my initials might still be carved in one of the tables.

Local writer, Food Network Producer and Documentarian, J. Garrett Glover, does a fine job of capturing the owners’ personalities with an ear for humor and a keen perspective on the history of Clyde’s and its many outposts.

All photos by Jordan Wright.