If you’ve never made your way to The Kennedy Center’s Page-to-Stage fest, let me let you in on a few pleasures that await you even before the pleasures packed into this annual Labor Day weekend of staged readings. First off is the odd exhilaration of experiencing this grand architectural edifice—which at times feels designed on some scale not actually human—converted into one big playful laboratory for the cultivation of brand spanking new plays. Creative invention, populism, and artistic freedom all free: What’s not to like? Next is the sensation of getting into places the public rarely sees, such as rehearsal rooms that feel like bunkered inner sanctums. Woo hoo, how cool is that? And finally, there’s the impressive presence of the KenCen ushering staff, all of them as chipper as can be in helping meandering theatergoers find their way to the reading space they’re looking for. Perhaps in keeping with the adventurous spirit of the lost lambs they shepherded, they seemed to be having a lot more fun on their jobs than usual. 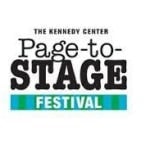 The Good Devil, In Spite of Himself by Mario Baldessari and Tyler Herman is a rambunctious, ribald farce about a troupe of commedia dell’arte players who are bedeviled by a sovereign censor plus Mephistopheles himself. The time, says a stage direction, is “The 17th Century. Or thereabouts.” The place is “France. Or thereabouts. Specifically, the stage of a nomadic Commedia dell’Arte theater troupe set up in a village square. Or, obviously, thereabouts.” Which is an accurate tipoff that some very silly text will follow

The play takes off from a royal decree that commedia players shall henceforth never speak dialog on stage. (I thought the playwrights just made that premise up. I learned during the lively talkback it’s a historical fact). Contrary to what you might think, the decree doesn’t forbid speaking—just dialog. Ergo monologues, arias, and all manner of slapstick shenanigans are okey-dokey. The ensuing plot is nutty, the sort you don’t really have to follow because each moment-to-moment comedic bit offers its own hilarity. A fun-loving bunch—actors Vaughn Irving, Liz Dutton, and Doug Wilder, directed by Tyler Herman, with stage directions read by Baldessari—brought the script’s nine loony characters to life, and as they did so, the audience laughed throughout.

After the one-hour-15-minute reading ended, Baldessari suggested there’s some text tweaking to come—though to this observer the piece seemed ready to mount. The only change I recommend is that the play needs a different title. The one it’s got sounds dry, like something turgid and musty and Restoration. The play needs something that promises the hoot it is—such as (wait for it) The Silence of the Hams.  (Okay, you can groan now).

I was first exposed to Alan Sharpe’s observant eye on black gay men’s diverse lives when I attended a staged reading of his No Homo at the DC Queer Theatre Festival in May 2012. So I was keen to see Aural Sex, a Page-to-Stage reading of six two-character plays he wrote and directed. The audience was with it every beat of the way, laughing, at times uproariously, often in knowing anticipation of where a sexual innuendo was about to lead. Yet what turned out to be interesting about the six short one-acts was that though sex was never far from the scene at hand, Sharpe’s story lines did not necessarily culminate in the characters’ having sex. In fact what was presented was an intriguing narrative revealing why the characters did not have sex.

The first, Cleaning House, centers on a quarrel between two lovers, Rodney (Darnell Morris) and Dorian (David A. Richardson). Dorian accuses Rodney of being unfaithful, the dispute turns ever cattier as Dorian trash-talks Rodney, and there’s a cruel twist at the end. The problem I had was that there was no way to even guess why these two have stayed together this long, or why they became lovers to begin with. Dorian is a first-class prick, and Rodney seems too smart to be so far in over his head.

The writing really picked up, though, with the second, Now…and Then, a devilishly constructed story about clergy sexual abuse, clergy sexual harassment, clergy malfeasance of many sorts. But we don’t know that at first. We meet a kindly, benevolent minister, Rev. Williams (Donald Burch III), and his fold’s eager youth counselor, Lamont (Reginald Richard), whose hunky body and troubled past the Rev contrives to exploit.

The sharp writing continued in play three, Or Forever Hold Your Piece, a chance meeting over drinks at a wedding reception between Kevin (Rashard Harrison), who is the brother of the bride, and Anthony (Stanley Andrew Jackson III), who turns out to be the groom’s ex-lover—which pushes Kevin’s buttons, with horrifying results.

After that shockeroo, the two-hour evening should have had an intermission, for much-needed relief of sundry sorts, including time to reflect on the plays so far, lest they seem in their similar two-hander setups to run together.

The fourth, Oh Freedom, is set in a college dorm room and offers a touching fresh take on the classic sweet-but-closeted-gay-virgin (Lem, read by Cleavon Meabon IV) with a crush on his ever-horny-straight-jock/stud roommate (Chauncey, read by Juan Raheem). It would have worked perfectly well to bring us back into the show from an intermission.

In the fifth, s-EX, Sharpe raised the “Will they or won’t they have sex?” stakes ever higher. Russell (Brian Hamlett) comes back from a night of partying to crash on the couch of his ex-lover Carl (Monte J. Wolfe), who, since they broke up, has put Russell up, put up with Russell’s absence of income, and claimed the bedroom they once shared. Said bedroom’s shutable door figures prominently.

In Second Thoughts an older gentleman, Leland (Michael Sainte Andress), wearing a comfortable caftan, has come home from a pickup bar (where, he says, he dropped by for “some refreshment…and eye candy”) with a hot and hot-to-ply-his-trade hustler, Tavarius (Tristan Phillip Hewitt). Among the play’s themes is the question “Who picked up whom?,” but the most provocative, and most richly rendered, is the by-now familiar question “Will they or won’t they?” Except now the question as framed by Sharpe turns on a character often caricatured in the gay world as an old queen. Sharpe renders Leland’s portrait with astonishing compassion, grace, and complexity. If there were ever a black Tennessee Williams, he would be deeply moved.

LINKS
Reporting from The Page-to-Stage Festival: The Law of Return by Alison Drucker.

The Schedule for the 2013 Page-to-Stage Festival.