Thanks to the Filene Center Orchestra and three choirs, Wolf Trap gave audiences a chance to re-experience cinema history and one of the most stunning compositions of our time in Howard Shore’s score to the The Lord of the Rings: The Fellowship of the Rings.

For this show, everyone got a great seat as two huge screens inside and outside the Filene Center projected the film without its soundtrack and a 70-person orchestra, and at least as many singers sit beneath the screen onstage to bring the score to life. Conductor Erik Ochsner had the impossible job of keeping everyone synced precisely with the film, while bringing life and emotion to the music. At the end of the night as everyone was taking a bow, he held up his conductor’s score to make sure it got an encore as well.

Hearing it live underscored how vital music is to this film, how each scene is precisely choreographed, and how much of the drama relies on it, especially in this first film with so much exposition. Much like an opera, Howard Shore created a leitmotif for each race of creature of Middle Earth and the ring itself, which becomes shorthand throughout to quickly orient the audience to what is going on in the film. Watching on DVD, the music does its job, but live it is a chance to truly hear the artistry that went into this magnificent work. The musicians were hardly idle all night.

Flautist David Lonkevich invoked Celtic folksongs during “The Shire,” and whenever that motif repeated while the percussion department kept busy on huge Japanese Taiko drums and bell plates, as well as more traditional instruments, during the industrialization of Isengard and the battles with the Orcs on “The Caverns of Isengard” and “Orthanc”. Strings ascended in outlandish Eastern melodies for “Rivendell.” Of course the most famous Leitmotif, the iconic four bars that invoke the heroes of the novel, plays throughout and it is such a thrill to hear it live while seeing the film on a huge screen again.

The City Choir of Washington, under Artistic Director Robert Shafer, had to learn Elvish and a host of Tolkein’s other languages for their songs – like the eerie descant of “Moria” and “The Great Eye.” The World Children’s Choir, under Artistic Director Sondra Harnes, was a fabulous addition – especially during the final climactic “The Departure of Boromir.” Two soloists also sng throughout. Kaitlyn Lusk has sung with orchestras the world over and her impossibly high, clear voice was a perfect match for these songs. During the final credits, she sang an impressive “May It Be” by Enya. Nolan Musslewhite was the boy soloist, a local with a beautiful voice, who normally sings with the Washington National Cathedral Choir.
It was a challenge to balance the sound at certain points between orchestra and film in a venue that was not built for that medium, but it was also fun to watch it in the open air, much closer to the action onscreen, as they tramped through the woods as well. 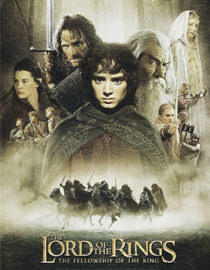 If you are a fan or have not gotten around to seeing the films, this is could not be a better introduction. The epic form, be it opera, symphony, novel, or film, holds a special place in world culture, and this performance is a mix of all of these. Howard Shore has created one for the ages with this music, and Wolf Trap has given it a worthy tribute.

The Lord of the Rings: The Fellowship of the Ring plays for two nights, September 6, 2013 and again TONIGHT at 7:30 PM at The Filene Center at Wolf Trap—1551 Trap Road, in Vienna, VA. Purchase tickets online. For future performances and information, check their calendar of events.