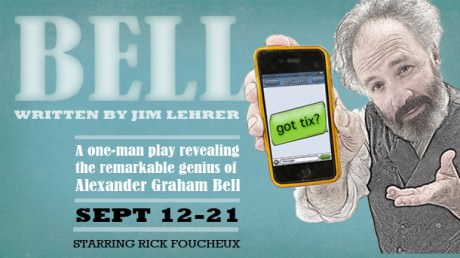 “Alexander Graham Bell has a deep and personal connection with National Geographic, starting with his beloved wife, Mabel, who was the daughter of our first president and founder Gardiner Greene Hubbard,” said Gregory McGruder, vice president for Public Programs at National Geographic.

Playwright is the lesser known of Lehrer’s many roles, which include renowned journalist, author, frequent presidential debate moderator and executive director and former news anchor for PBS NewsHour. Besides BELL, Lehrer has written 20 novels, two memoirs, a nonfiction work about the presidential debates and three plays. His previous plays include Chili Queen, Church Key Charlie Blue and The Will and Bart Show, which have been produced in theaters throughout the country, from New York to Washington to Los Angeles. His latest novel, Top Down, focuses on the Kennedy assassination and will be published this fall.

“When Rick Foucheux and his wife approached me with this idea, I realized it would be the perfect way to tell National Geographic’s story, through one of the most recognizable names in our 125-year history. Of course, it didn’t hurt that one of the most talented actors in Washington would be portraying Bell,” McGruder said.

Foucheux captivates the audience through his impassioned, solo performance that cleverly crosses barriers on stage and in time. As a prominent fixture in the Washington theater world, Foucheux has graced the stage in many acclaimed roles, including Willy Loman in Death of a Salesman at Arena Stage, Sir Toby Belch in Twelfth Night at the Shakespeare Theatre, Tevye in Fiddler on the Roof at the Olney Theatre Center, Claudius in Hamlet at the Folger Theatre and Erie Smith in Hughie at the Washington Stage Guild. In 2000, Foucheux received the prestigious Helen Hayes Outstanding Lead Actor Award for the title role in Edmund at the Source Theatre and he received the honor again in 2006 for the role of Mason Marzac in Take Me Out at The Studio Theatre.

In this biographical piece, Foucheux embodies the many roles of the famous inventor — devoted husband and family man, teacher of the deaf, innovator and rival of Thomas Edison — proving Bell’s legacy extends far beyond the telephone.

Jeremy Skidmore has directed at many of the area’s premier theaters, including Signature Theatre, Round House Theatre, Theater J, Olney Theatre Center for the Arts, and Everyman Theatre. Outside of Washington, Skidmore has directed, produced, and taught all over the world, including New York, Chicago, Los Angeles, London, Tokyo and Taipei. As Artistic Director of Theater Alliance, he produced 22 productions in five years, which garnered 22 Helen Hayes nominations.

This powerful cast and crew creates a fitting tribute to one of the Society’s early leaders who embodied the spirit of exploration with his never-ending curiosity about the world and all that is in it. Bell’s work is rooted in National Geographic’s foundation. His personal connections with fellow Society founders also make his legacy unique.

Scarlet Fever claimed the hearing of Mabel Gardiner Hubbard, daughter of National Geographic’s first president Gardiner Greene Hubbard, when she was five years old. According to Laura Wallach’s Nat Geo News Watch blog post, “A National Geographic Love Story,” Bell met Mabel while serving as her committed speech therapist and teacher, but he would eventually become her loving husband. Mabel and Alexander’s daughter, Elsie May Bell, married Gilbert Hovey Grosvenor, who would later succeed Alexander as the third president of National Geographic.Now, 125 years later, BELL will open at National Geographic Headquarters in a venue named for his son-in-law: Grosvenor Auditorium.

‘Inventing “Bell‘ at National Geographic: A Q&A with Rick Foucheux and MJ Jacobsen’ by John Stoltenberg on DCMetroTheaterArts.

Watch a video biography of Alexander Graham Bell on biography.com.