Rockville Little Theatre opens its 65th season TONIGHT through October 27th with Larry Shue’s outrageous comedy The Nerd, at the F. Scott Fitzgerald Theatre. Produced by David Levin, directed by Laura W. Andruski, and with a cast of veteran RLT performers and new faces, The Nerd promises an evening of non-stop laughs for audiences of all ages. 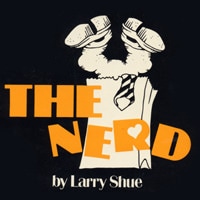 An aspiring architect, Willum Cubbert (Chris Penick) has often told his friends about the debt he owes to Rick Steadman (Noah Steurer), a fellow ex-GI whom he has never met but who saved has life in Vietnam. He has written to Rick to say that, as long as he is alive, “you will have somebody on Earth who will do anything for you.” Willum is delighted when Rick shows up unexpectedly on the night of his 34th birthday party. But his delight soon fades as it becomes apparent that Rick is a hopeless “nerd” – a bumbling oaf with no social sense, little intelligence and even less tact. In just one week Rick almost single-handedly destroys Willum’s career, his life, and his sanity. Incident piles upon uproarious incident until the normally placid Willum finds himself contemplating violence – a dire development which is happily staved off by the surprise ending of the play.

“The Nerd is the perfect show to kick off our season,” said RLT’s President, Ken Kemp. “We’re delighted to have Laura Andruski directing for us again this year. Her production of A Flea in Her Ear was one of the highlights of our 2012-13 season, and she has a real gift for directing comedy. This is a show you won’t want to miss.”

The Nerd plays TONIGHT Friday, September 27th through Sunday, October 6th at Rockville Little Theatre performing at the F. Scott Fitzgerald Theatre – 603 Edmonston Drive, in Rockville, MD. Evening performances are at 8:00 PM, and Sunday matinees are at 2:00 PM. Tickets are $18.00 for adults and $15.00 for seniors and students, and are available by calling the box office at (240) 314-8690, or online. 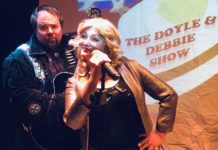