The official Opening Night of NextStop Theatre Company’s production of Alfred Hitchcock’s The 39 Steps is tonight at 8 PM in Herndon, VA. It’s the first opening night for NextStop Theatre Company (formerly The Elden Street Players) and we want to wish them well as they open their first season as a new professional theatre company.

There will be a red carpet and photographer to greet everyone and a champagne reception after the show. 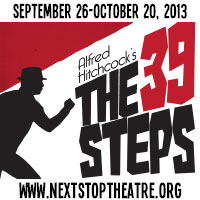 The 39 Steps
By Patrick Barlow
Adapted from the novel by John Buchan and the film by Alfred Hitchcock
Directed by Evan Hoffmann
September 26-October 20, 2013

What do you get when you mix a Hitchcock masterpiece, a juicy spy novel, and just a dash of Monty Python?  One of the most clever, exciting, and hysterical plays to come out of Broadway in years! You will be amazed as you watch four incredible actors take on more than 140 characters in a fast-paced whodunit that zips across England and Scotland. Murder, high speed chases, mistaken identities, espionage, and plenty of sexual tension will keep you on the edge of your seat in this loving homage to the classic spy thriller films of the 30’s and the magic of live theatre!

Producting Director Evan Hoffmann took us on the journey of becoming NextStop Theatre Company on DCMetroTheaterArts. Here are those articles.

‘Reaching the NextStop’ Part 1: An Introduction by Evan Hoffmann.

Meet the cast of The 39 Steps.