The National Chamber Ensemble made its debut at the Kennedy Center on Thursday, September 26, 2013 with a wonderful and well-performed concert that delighted a clearly appreciative audience. Members of the National Chamber Ensemble performing in this concert included NCE Artistic Director and violinist Leo Sushansky, pianist Carlos Rodriguez, and guitarist Andrew Pal.

The Kennedy Center’s Millennium Stage Concerts provide wonderful opportunities for people to attend performances 365 days a year at no charge. On any given evening at 6 pm, the Millennium Stage audience consists of a combination of local families, tourists, school groups, seniors, and people arriving for evening performances by Washington National Opera, the National Symphony Orchestra, a touring Broadway show, or performances by any number of world class actors, musicians, or dancers. While the audience is always appreciative, Millennium Stage artists are wise to program with variety that will appeal to a broad range of attendees, and Leo Sushansky did just that. The concert program included Sonatina for Violin and Piano Op.100, by Anton Dvorak, Astor Piazzolla’s Tanguismo for Violin and Guitar, Two Sonatas for Violin and Guitar, No. IV and No. V, by Nicolo Paganini, and Robert Schumann’s Sonata for Violin and Piano in A minor Op.105.

Sushansky, Rodriguez, and Pal performed wonderfully throughout the program. Shushansky’s training, talent, and musicality were noticeably on display throughout the concert as his fingers seemed to move effortlessly across the strings of his violin. From classical to spiritual genres, through a delightful tango, and while navigating the virtuosic demands of Paganini, he was consistently superb. Rodriguez, a frequent collaborator with NCE, turned in an exciting and energy filled performance, one well deserving of praise. Andrew Pal, a guitarist equally at ease performing in an alternative rock band or sharing the stage with classically trained and focused artists, produced a gorgeous sound from his acoustic guitar, and the pairing of guitar and violin in both the Piazzolla and Paganini was very enjoyable.

There was a second debut involved with this concert and that was the debut of Leo Sushansky’s new violin. Sushansky, who has traditionally performed on a Guadagnini violin, recently received a new violin as a gift from his mother, Rimma Sushanskaya, a violinist and student of the legendary David Oistrakh.  Crafted in Cremona, Italy by Vittorio Villa, the violin is beautiful and has a lovely rich tone that will only become more beautiful with time.

The National Chamber Ensemble is the brainchild of Leo Sushansky, a Juilliard trained musician who has performed on stages all over the world. Sushansky does what he does for love of music, for love of teaching, and for the love of sharing great art. He surrounds himself with very high-talent musicians who are invited to be members of NCE and who perform with NCE based on the music programmed in any given concert. The group, in residence at the Rosslyn Spectrum Theatre at Artisphere, in Arlington, presents a wonderful and truly creative five concert season of music. The concerts are very affordable and intimate, and always include a free after concert reception that provides a fun opportunity for artists and audiences to meet and mingle. 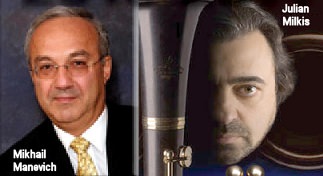 National Chamber Ensemble will present its first concert of the 2013-2014 Season, Jewish Musical Treasures, on Saturday, November 9, 2013 at 7:30 pm. This promises to be a fun and moving concert, so make it a point to attend! Tickets are available online at NationalChamberEnsemble.org and Artisphere.com, by phone at (888) 841-2781, or in person at the Artisphere Box Office.

National Chamber Ensemble will hold its 2013 Benefit on October 5, 2013 from 6:30 – 8:30 pm. This is a wonderful opportunity to support the NCE while enjoying drinks, hors d’oeurves, a wonderful concert, an amazing silent auction, and to enjoy a sparkling night of fun in the beautiful Tuscan mansion of Dr. Gregory and Mrs. JaLynn Prince, in Potomac, Maryland. For more information, to purchase tickets, or to bid on silent auction items now, please click here.