Aldersgate Community Church Theater presents Life With Father, the longest-running play in the history of Broadway. The stage play was inspired by a collection of stories that Clarence Day wrote about his father, a well-meaning but stringent Wall Street Broker, who enforced his inflexible lifestyle on his family. Roland Branford Gomez directs this ambitious production.

Set Designers Bill Glikbarg and John Downing turns the stage into the Day Family’s morning room on the elite Madison Avenue in New York City, late 1880s. Grand, colorful, and exquisitely detailed, the setting itself got applause from the audience when the curtains lifted. A lavish entryway with overhead stained glass and stenciled crown molding frames luxuries such as a marble fireplace, framed artwork, elegant vases, and polished furniture. This is the home of a successful businessman, and it took a great team effort to bring it to the stage, including construction led by Stuart Travis, Bill Glikbarg, and John Downing, and with painting by Megan Coyle. Lighting Designer Jeff Auerbach creates the illusion of sunlight streaming through a graceful bay window, while Sound Designer Lan Wray uses effects such as a ringing doorbell and shattering dishes to enhance the plot. Set in the late 1880’s, Costume Designer Georgia Harlow got to explore the refined edge of a different era, with high-laced collars and bustled dresses, sharp suits with imposing top hats, and maid costumes that look like they walked right off the set of Downton Abbey. Like the household itself and the family’s lifestyle, the characters are impeccably groomed, with the children’s hair looking as if they were parted by a ruler.

In the Day home, Vinnie (Kacie Greenwood) is training new maid Annie (Olivia Hayes) before breakfast. The instructions are very specific and precise, to the point that it seems ridiculous. Vinnie’s reasoning becomes clear when Father (a wonderfully animated James McDaniel) arrives for breakfast and has the maid in tears within moments, grumbling over the “substandard” service. Father does not set out intending to hurt the maid’s feelings; in fact, he seems completely oblivious to how his brusque nature effects those around him, wondering aloud what causes such distress. Vinnie and his four sons, the budding Clarence Jr. (James Wood), business-minded John (Aubrey Blout), playful Whitey (Brian McNamara) and young Harlan (Joseph Machosky) are resigned to his meticulous personality, though it is difficult to manage. When his youngest son states at breakfast that he dislikes oatmeal, Father insists, “I’ll tell you what you like and what you don’t like.”

The plot is really a collage of different stories that show how the family handled their father’s eccentricities. Father endlessly lectures Vinnie on her spending and bookkeeping, a topic that is revisited over and over. When Vinnie invites her cousin Cora (Sherman McDaniel) and her young companion Mary (a peppy Alyssa Denton) to stay for a visit without consulting Father, she must find a way to make him cooperate. The main conflict arrives when the devoutly religious Vinnie discovers that Father has never been baptized…and he intends to keep it that way. Vinnie is horrified, and sets out to gently manipulate her stubborn husband into his own baptism. When a situation turns dire, will desperate Father re-think his priorities?

While overall the performances were enjoyable, there were some flubbed lines and hesitant deliveries. The grand set and striking costumes were the definite highlight of the show. While the subject matter is clean and family-friendly (with exception to Father shouting “Damnation!” whenever displeased, which is often), this production drawback was its very long running time. Aldersgate is known for its quality family entertainment, and there were lots of children in the audience (a staple at Aldersgate shows), but they could not handle the nearly three hours running time, despite two intermissions. By the last half hour of the show, the aisles were full of impatient whimpering.

Overall, I personally enjoyed the show, though sitting for such long periods was a bit uncomfortable and the acting could be have been more polished. (I am sure as the run continues this problem will be resolved).There were very funny moments as well, and I loved having a peek into the late 1880s, leaving my own reality for one that was graceful, poised, and romantic.

This production of Life With Father is dedicated to Drucilla Vander-Linden, the founder of Aldersgate Community Church Theatre. Her active community outreach touched countless lives, and she will be missed immensely. 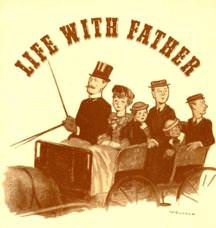