I’m sure you’ve heard about the infamous War of the Worlds radio broadcast incident in the 1930s, where H.G. Wells’ novel was adapted for a radio broadcast read by Orson Welles and caused chaos and panic because many people thought the fictional broadcast was real. I’d always wondered how people fell for that. On a rainy gloomy October night at the Gaithersburg Arts Barn, Sandy Spring Theatre Group’s double-billing performance of War of the Worlds and When Welles Collide, both performed as live radio broadcasts, had me so engaged that I could totally understand how those listeners in 1938 were fooled.

The War of the Worlds broadcast, directed by David Dossey, starts at the Columbia Broadcasting Studio (CBS) with an introduction to the novel, describing the intentions of the aliens and continues with a musical selection which is interrupted by a news flash, where the announcer (Joseph Marino), reports that there were strange explosions on Mars, seen by the famous astronomer and Princeton professor Richard Pierson (Stephen Swift). The news grows increasingly menacing and then a strange “meteorite” crashes in rural Grover’s Mill, New Jersey. Reporter Carl Phillips (Daniel Santiago) reports from the scene of a Martian emerging from the meteorite, full of weird ominous sounds by sound engineer Matthew Datcher and Karen Petersen. As the crowd of onlookers scatter, the Martians incinerate the crowd with a heat ray. Martial law is declared, the broadcast is interrupted as the studio struggles with reporter casualties, and destruction of the studio. A tripod alien fighter ship appears the news grows increasingly more desperate, more horrific with the studio reporting the obliteration of an army of 7000+ soliders, the invasion and destruction of New York. One of the highlights of the broadcast was when Jena Stone’s heart-wrenching plea for a response from the New York studio to report back is met with eerie silence.

While War of the Worlds was fascinating, the best part of the night was after the intermission when the cast performs When Welles Collide, written by Nat Segaloff and John de Lanice based loosely on Wells’ War of the Worlds. I laughed for a full 30-minutes, from start to finish of this hysterical show narrated by Daniel Santiago about the destruction of the CBS studio and the Southern California coastline by a sea-faring Martian/alien force.

Each and every one of the actors are comedic geniuses, timing their quips and hysterics perfectly. Favorites included Santiago’s hilarious high jinxes, Yvonne Paretzky’s French, Jamaican, British, Scottish bag lady, and Philip Stamper as the radio show call screener, Josh. Michael Abendshein and Phil Kibak round out this 10-person cast.

War of the Worlds and When Welles Collide at the Gaithersburg Arts Barn is a great fun night out! 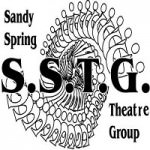 War of the Worlds and When Welles Collide runs Fridays-Sunday through October 27, 2013 at Sandy Spring Theatre Group performing at The Gaithersburg Arts Barn–311 Kent Square Road, in Gaithersburg, MD. Purchase tickets by calling (301) 258-6394.