Broken Spokes is a complex production with excellent acting that packs an emotional wallop while lending insights about Deaf culture.

Says Writer-Director Willy Conley, “My intention was to write a gritty, realistic Deaf drama that veers away from the sweet, helpless, sexless, angelic view that the hearing public generally has of deaf people.”

Broken Spokes is the gut-wrenching story of two brothers in their 20s whose parents have died in an accident, and the social worker who tries to help them.

I think that what Conley is saying is that the men can survive a difficult passage without any help from outsiders, who are represented by Rebecca, the social worker who becomes engaged to one of them.

All the characters are deaf and the three actors are successful at portraying their shifting personalities as the play jumps back and forth in time from the present to the 1980s.

Joshua Walker, a history major at Gallaudet, plays Jackson, the older brother. His character uses a lot of slang  gestures that are so obscene that they would be unmistakable in any language. You have to watch carefully to see them, and it’s worth it. Walker is 100 percent convincing in his portrayal of the different sides of Jackson, a noble savage who can be mean, violent, insightful, and sensitive.

Ronald “Lance” Hall, an ASL and theatre major, plays Weston, the younger brother. Hall is a study in body language and excels at ardent lovemaking, exasperated impatience and realistic fighting. He mixes natural talent with practice, and his hand movements are like a modern Marcel Marceau.

Brittany L. Frank, a psychology and studio art major, plays Rebecca. Frank uses a light touch to avoid becoming a  stereotypical nag in her dual role of social worker and Weston’s betrothed. Some of her facial expressions remind me of  the silent movie star Lillian Gish.

Voice actors piped over the sound system suit the stage actors and their characters well, although they were not so much interpreting the ASL as they were performing a dramatic reading the script.

The complexity of the script and characters is reflected in the staging. There is a lot going on visually in the set and props. Though not all of it is necessary to the action, it makes for an entertaining visual experience.

The set by Ethan Sinnott is the inside of a two-story house. The house has a kitchen and dining area, seven windows, a front door, foyer, living room. and a hall leading off to a bathroom. The front of the stage has a grassy strip with a small marker that represents the parents’ grave.

The play starts here with a soliloquy by Hall as he lays down a broken bicycle wheel, saying that and he thinks the wheel is more meaningful than flowers. How the wheel got broken and how the parents died becomes apparent as the play progresses. 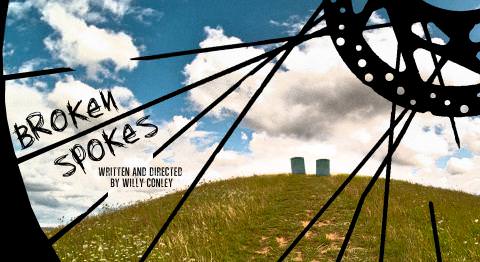 The props assembled by Kala Granger include a big red couch, a large refrigerator, a tall plant with long fronds, lots of books, some well-loved stuffed animals, framed photographs and paintings, an old  TTY (teletype) machine, and all manner of kitchen utensils and decor.

Sound Designer Mehdi Raoufi uses big drums to provide ponderous vibrations with cymbals chiming in, and birds chirp in the air as Frank depicts them with her gently waving hands.

Lights by Annie Wiegand include a flashing door lamp that indicates the phone is ringing or someone is knocking, a standard practice for people who are deaf.

The highlights of the play for me are several vignetted stories that the actors tell. They use Sign-Mime/Visual Vernacular, a dying form of ASL storytelling, according to the program notes.

Walker’s story about fighter pilots in their jets is rendered with a poignancy that shows his character has been retelling it to himself ever since he first learned it from his father. Hall’s rendition of a beaver cutting down a tree is hilarious in its comedic timing and would get lots of hits on YouTube. To see Frank’s story about birds is like watching poetry. All three were mesmerizing, and, for me as a non-ASL speaker, they provided a glimpse into a world of creative imagination that has the potential to bridge the unfortunate cultural divide between the Deaf community and hearing people.

The experience of seeing the play performed in American Sign Language in addition to hearing the voice overs left me with an emotional after-burn that stayed with me for awhile. I can only surmise that we respond to movement on a different, perhaps deeper, level than we do to speech. To absorb both at the same time is an utterly new experience.

Broken Spokes is having its DC premiere at Gallaudet University, a liberal-arts college for people who are deaf or hard of hearing. The play is in American Sign Language with voice-overs in spoken English.