Happy Birthday, Dianne! Wow! What a performance on Friday, October 18, 2013 at Strathmore! Whether fans came to bask in your signature Latin style of nearly forty years, your effortless scatting that few songbirds can match, or the newer soulful vibe of contemporary songs, all we can say is “You go, girl!” You wanted your audience to be “uplifted” at least for a few hours, and we were, leaving stress, relationship challenges, and government shut-downs at the door. 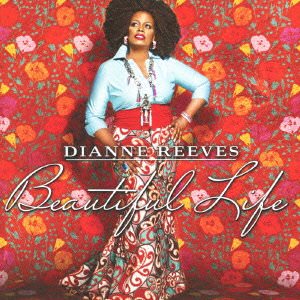 Dianne Reeves is a four-time Grammy Award winner, and recognized as one of the preeminent female jazz vocalists in the world. Offering two cuts from her new album, Beautiful Life, which melds elements of 21st century jazz, R&B, Latin, pop and soul, the new CD will be dropped in US stores on February 14, 2014.

Dianne’s first offerings on Friday were “Dreams,” a Fleetwood Mac rendition featuring Stevie Nicks, and Bob Marley’s “Waiting in Vain” which stirred all kinds of feelings of unrequited love yet, somehow in singing it, she infused an energy that felt more upbeat and hopeful than resigned and hopeless.

A life-long Billie Holiday admirer, Dianne followed with Holiday’s 1952 cover of “Stormy Weather,” originally a 1933 Ethel Waters rendition which Dianne reworked in her own unique style by offering more soprano than lower register notes, which seemed to plead the case for hope rather than disappointment in love relationships.

Few would disagree with a universal truth that the power of music goes beyond words. Dianne’s next offering, “Tango,” a mesmerizing track off of Beautiful Life honored the universality of language and music, and evoked immediate accolades with its mixture of ‘tongues.’ “Tango” scored high marks on several levels. It took a moment for me to realize that she was not singing in any known language, but rather melding syllables, guttural utterances, teeth-clicking, and musical sounds which effortlessly rolled off her tongue while she danced and swayed sensually to the accompaniment of Romero Lubambo’s hot acoustic guitar. To me, Dianne was singing in tongues. Sacred. Uplifting. Touching spirits. Healing souls with her music.

In heartfelt memoriam she shared the August 2013 loss of her cousin George Duke (musician) and the October 2013 loss of colleague Gloria Lynne (jazz vocalist), with her rendition of Lynne’s 1964 signature song “I Wish You Love.”

For Beautiful Life, Dianne composed and sang a redemptive song called “Cold,” which elicited recognition and responsive shouts from her fans. An excerpt:

“I should have seen it coming, the signs were everywhere.
Never in my wildest dreams did I think I would ever feel this way.
I’m better now without you; I got my swagger back so I’ll be on my way.
I wish you happiness, a heart with no regrets,
I don’t want to live in bitterness, I’m better now.”

Dianne ended her two-hour set with a 1987 favorite “Better Days.” Immediately embarking upon another international tour to promote Beautiful Life, fans will have a short wait until her next state-side appearance. In closing Dianne bid her fans good night, saying, “I see increase; I see breakthrough; may God increase your territory. [1 Chronicles 4:10]

Dianne Reeves played October 18, 2013 at 8:00 p.m., at the Music Center at Strathmore – 5301 Tuckerman Lane, in North Bethesda, MD. For future events, check their calendar of events.