Come and celebrate the theatre as it is meant to be celebrated! With wine! And grapes! (Ok…grapenuts…) and a riveting good show about the great and almighty Greek God of theatre…DIONYSUS! Ritual madness finds its nest at Baltimore Annex Theater as they present an original work, Two Suns Over Thebes, written by Alex Hacker based loosely on The Bacchae. Co-Directed by Alex Hacker and Mason Ross, this compelling piece of theatre infuses music and ritualistic dancing into the age-old retelling of a classic Greek revenge tragedy. 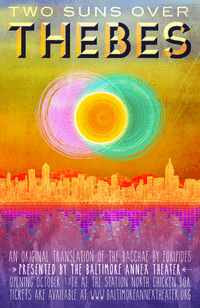 Bringing in Baltimore area composers Dan Deacon, Gerrit Welmers, and Matmos, Directors Alex Hacker and Mason Ross use songs crafted originally through the piece to fully enlighten the audience to the true celebrations of the theatre God. The three area composers infuse electronic and house bounds with found sound and other unique compositional elements to make these truly individual sounds. Combining these songs with Lighting Designer Rick Gerriets’ flashing and strobe designs makes for a dance-party atmosphere that oscillates between interpretive symbolic tribute and absolute expressive pleasure.

The play itself is brilliantly written; Hacker molding the story around his vision of these legendary creatures of myth. There is an underlying modern feel to the performance, coming mostly from the liberal sprinkling of colorful foul language and modern phrasing that jars the audience into the present time, but not in an disruptive fashion. The depth of the characters that Hacker creates in his writing is astounding; richly dynamic instances of the God and Thebans alike.

Crafting a Greek Chorus into this piece is to be expected, but the manner of execution is sensational. The members of the Chorus— Madison Coan, Emily Hall, Kate Hardwicke, Sarah Jacklin, Martin Kasey, and Lexie Mountain— come together as a singular yet versatile entity; one voice with many tongues. These six performers have a keen understanding not only of the text but of how to deliver it as if they were one being, speaking in perfect unison and shattering into individuality. Their cohesive nature gives them a pronounced presence on the stage, their bodies and their voices equipped with titillating serpentine qualities.

Coan, Hall, Hardwicke, Jacklin, Kasey, and Mountain are the vessel through which the story exists. These six performers work as an ensemble to not only exist within the confines of the play but present a rather racy, albeit informative, rendition of “Greek Mythology 101” to the audience. Their dancing is divinity incarnate and there will consistently be moments where you won’t want to look away from them.

Playing the all encompassing role of the God Dionysus (Adam Endres) is no small feat, but Endres lives up to the task in true Olympian fashion. Snarky, flamboyant and all around exciting, Endres prowls about the stage with an air of confidence most befitting of a God. His emotional eruptions would make Vesuvius blush in shame as he rails on about demanding respect. The versatility of his performance— from treading gently and with a sultry air around the women to his sparking confrontations with Pentheus (Rjyan Kidwell)— is incredible; a well delivered performance.

Kidwell embodies the arrogance of the Theban King with a flare. The arrogance oozes from him, his harsh facial expressions enhancing the constant annoyance and anger that flows within him. Other performances of note include  Ishai Barnoy as Tiresias and Jonathan Jacobs as Cadmus. The pair play extremely well together at the beginnin of the show, traipsing about like two giddy old fools in delight. Jacobs gives a harrowing conclusion to his performance with startling emotional depth by the end of the show; a fitting end to such a tragedy.

And though her role be brief, Agave (Molly Margulies) makes her story known, tragic as it is. Margulies is a fearless warrior upon first arriving on the scene, her vocal excitement scaling the heights of Olympus itself in triumph over defeating the great beast. The immediate reversal into the darkest depths of despair is breath-taking to observe; the horrific realization that springs forth from within her indeed quite the spectacle.

Two Suns Over Thebes is a myth for the ages. Be sure to check out this Greek gem of a show at Baltimore Annex Theatre before both suns set over Thebes for good.

Two Suns Over Thebes plays through November 10, 2013 at Baltimore Annex Theater at Station North Chicken Box—West North Avenue, in Baltimore, MD. Tickets can be purchased at the door, or in advance online.