Can a single character carry an entire feature-length movie with success? Arguments for both sides of that issue will be found in All Is Lost, the lean but brutal, one-person survival-at-sea saga starring Robert Redford.

All Is Lost, which opens locally tomorrow on October 25th, already made waves at Cannes this year, where it won audience ovations out of competition. Its seamless mise-en-scene puts the viewer in a claustrophobic clinch with Redford from the very first sequence, and Director J.C. Chandor anchors each scene thereafter with a cinematic specificity and grace that amounts to poetry.

Anyone who has had a close encounter with the art and peril of sailing will be instantly riveted as Redford’s soloing yachtsman is rudely awakened from his sleep by a collision with a derelict cargo container afloat somewhere in the Indian Ocean. This castoff cargo holder is just the first of many unsolved mysteries to be sprung on the viewer. Perhaps it is only meant as a symbol of our disposable consumer society precipitating the ultimate showdown between Man and Nature.

Whatever its source and significance, the mid-sea collision launches Redford on an unwelcomed struggle to survive. It will involve every trick in his survival-at-sea playbook, from repairing a major breach in the fiberglass hull and remedial first aid to re-rigging the mast, attending to a waterlogged radio, learning to navigate by the stars, providing fresh water, and much more.

There is inherent drama in each of these emergencies, but there is also lots of quiet time to wonder about all that we have not been told. Who is this man out sailing by himself in a distant sea? Why has be abandoned his family? Why has he become an outcast from his own society?

We hear one snippet of narration from a letter he drafts saying goodbye to his family and expressing his regrets. But what are his regrets? Has he sailed away from his home to prove something, or to escape something?

In the absence of answers to these questions, the Redford character is like a blank screen on which we project all the dashing Redford movie personas of the past: the playboy matinee idol from Inside Daisy Clover; the nouveau riche impostor from The Great Gatsby; the wilderness loner of Jeremiah Johnson.

The actor seems completely natural and in his element here. But whether he lives or drowns at the end of All Is Lost, make no mistake: It is Redford’s early movie life that has been flashing before our eyes.

All Is Lost is what cinephiles call an experiment in “pure cinema.” The minimalist screenplay has only one elemental conflict of wills: As Redford becomes more and more sure that he wants to survive, his every attempt to do so is overruled by the greater force of nature.

All Is Lost has the misfortune of being released on the heels of Gravity, another struggle-for-survival-in-nature saga. But Gravity gave us characters with back stories, and that made their struggle much more involving and compelling. All Is Lost may well snare Redford an Oscar nomination and might even get him the long overdue career nod he deserves. But as good as the film may be, it comes up short when asking us to invest two hours in the fate of a character we know so little about. 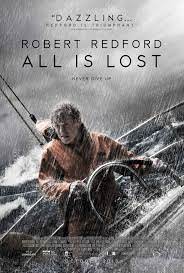 DC Area movie showtimes for All Is Lost.