“How’s your family?” are the seemingly innocuous final words of this startling and riveting new play. Carly, a quintessentially desperate housewife, is on the phone with a female neighbor in their perfect and posh suburb known as The Falls of Autrey Mill (a real luxury community in Georgia down the road from where playwright Paul Downs Colaizzo grew up). Carly (played by Christine Lahti, in a stunning, career-topping star turn) is trying to sound chipper despite the mess her own family has turned into. Her voice almost cracks. She can scarcely hang on. Her last line is like a plea for a lifeline from someone about to drown.

Leo Tolstoy famously wrote, “All happy families are alike; each unhappy family is unhappy in its own way.” More to the point today, each dysfunctional family is dysfunctional in its own way. And in Pride in the Falls of Autrey Mill, premiering at Signature Theatre, Colaizzo gives us a doozy so deliriously unhinged that we must interrupt our laughter to gasp.

You read that right: laughter. This play at times is breath-catchingly funny.

I first recognized Colaizzo’s distinctive voice in his play Really, Really, which had its world premiere at Signature Theatre in 2012. Here was a writer with an unerring ear for the tragicomic in modern life. He could take a scene from quicksilver hilarity to pitch-dark undertow and back again. And he had crafty nerve. He could put discomfiting contemporary topics in front of audiences (in the case of Really, Really,an allegation of sexual assault among millennials) and entertain at the same time.

To get the gist of what Colaizzo accomplishes with his latest (rather awkwardly titled) play, think of it as simply the Carly play. One of Carly’s recurring comic quirks is that she is constantly self-referential: She can’t seem to have a conversation with anyone without making it all about her. In truth Pride in the Falls of Autrey Mill really is all about Carly. Colaizzo has put her front and center—and the front is a facade and the center does not hold. Though the play is set in 2009, Carly is like a housewife from the 1950s. She’s stuck inside a beautifully decorated aspic made from the recipe that Betty Friedan said had no name.

Carly’s existence is also circumscribed by three men who disappoint her. Neither of her two grown sons is much into a matchup with a potential wife, and that drives her round the bend from the get-go. The younger, Chad, informs her in the very first line of the play that he is gay—just one of many comic surprises Colaizzo has in store. The older, Tommy, is fat and eats all the time, which Carly says is his way of keeping away girlfriends. Colaizzo has given both brothers—Chad (nimbly played as an earnest hottie by Anthony Bowden) and Tommy (sensitively played as a likeable oaf by Christopher McFarlan)—their own worldviews, their own intriguing lives, and their own eyeopening backstory; but in Carly’s eyes, she’s been an utter failure at launching them into wedded bliss.

Compounding matters, her own marriage is anything but. No matter how thin she struggles to make herself, no matter how frequently she primps in mirrors, she cannot get her husband Louie to desire her. He is away from home working a real lot, and he gives her all the material possessions she could possibly want—a lavish home, a closetful of costly clothes, yet another new car. But she cannot get what she wants most: to be loved. Louie (solidly played by Wayne Duvall as gruff guy with a gut) lets her know in Act One he is leaving her for a younger woman.

The Signature Theatre production is as flawless as Carly’s impeccably kept home. Michael Kahn directs with deftness and depth. The scenic design by James Noone resembles the studio set for a television sitcom, a tidy metaphor for the play’s accessible surface of humor (plus, it’s rigged with some sight gags that had me chuckling long after). Even the sound design by Palmer Hefferan registers as well-off life lite.

Significantly, the story often resembles other dramatic works centered comically or tragically on women’s lives of quiet desperation inside modern marriages. I caught fleeting echoes of the recent Next to Normal and August: Osage County, the early 1970s film Diary of a Mad Housewife, the late 1970s sitcom Soap…the list goes on. Colaizzo has chosen a trope that seems familiar because in fact it could not be more commonplace. It’s a contemporary collective masterplot—a story going on in unliberated marriages by the millions—and Colaizzo has given it his own unique fresh spin: he has tracked the fallout for a whole family, and he has created in Carly a character that leaps onto the the list of great roles for women.

Running Time: 95 minutes, with one intermission. 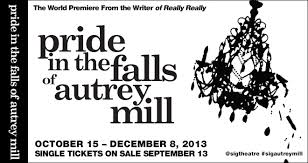