Lars Klores, who plays Detective Tupolski in Silver Spring Stage’s new production of Martin McDonagh’s The Pillowman, has a simple way to describe this play, which opens this Friday, November 1st:

“It’s like a nightmarish, Kafka-esque episode of Law & Order, written by the Brothers Grimm and directed by Quentin Tarantino.”

All those contributed to the appeal of the play for Director Craig Mummey, who also directed McDonagh’s The Cripple of Inishmaan at the Stage in 2008. “McDonagh has drama and humor in a choke-hold death match with each other,” Mummey says. “And that’s been the great fun and challenge of working with this script.”

Set in an unnamed totalitarian state, The Pillowman centers on a writer, Katurian (Chad W. Fornwalt), who is being interrogated by police officer Tupolski (Klores). Katurian’s problem is that his gruesome short stories are similar to a series of local child murders. The play is unflinchingly graphic in its descriptions of Katurian’s stories and the murders; it is suitable for mature audiences only.

But The Pillowman is much more than a grisly tale. Rather, says Mummey, it raises a host of “themes and questions: freedom of expression and the responsibility of the artist, individuality, fatalism, man’s inhumanity to man, the art of storytelling, and on and on.”

Critics were captivated by McDonagh’s exploration of these ideas as well as by his horror-humor balancing act: The Pillowman won two Tony Awards and a New York Drama Critics’ Circle Award, along with the UK’s Olivier Award for Best New Play in 2004-2005. 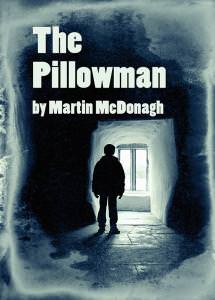 As Katurian, Fornwalt has found The Pillowman to be an exhilarating experience—and he thinks audiences will be equally enthralled. “I love being challenged when I go to the theater, and I feel that McDonagh does that from the minute the lights come up,” he says. Klores adds that while The Pillowman is not for everyone, audiences can expect to be thrilled, intrigued, and engaged from beginning to end.”

Along with Klores and Fornwalt, the Stage’s production of The Pillowman features Kyle McGruther as Policeman Ariel; Chris Daileader as Michal, Katurian’s mentally damaged brother; Malinda K. Smith as the Mother; David Flinn as the Father, and Kelsey Murray as the Child. Amy Sullivan and Pauline Griller-Mitchell are co-producers; Sullivan is also Assistant Director.

The Pillowman plays from November 1-November 23, 2013 at Silver Spring Stage – in the Woodmoor Shopping Center – 10145 Colesville Road, in Silver Spring, MD. Performance times are Fridays and Saturdays at 8 p.m., plus Sunday matinees at 2 p.m. on November 10th and 17th. Regular ticket price is $20, but $10 tickets are available for select performances on Goldstar.