Tumble out of bed and stumble to the theatre, the Dundalk Community Theatre, that is, for 9 To 5, the musical based on Dolly Parton’s hit movie of the same name. With Book by Patricia Resnick and Music and Lyrics composed by Dolly herself, it’s a crazy little comedy about women in the workplace that has a few good laughs for everyone. Directed by John Desmone with Musical Direction by R. Christopher Rose, this show is fondly reminiscent of the movie with quaint musical numbers thrown into the mix.

Scenic Designer Marc W. Smith really gets the feel of the end of the 70s early 80s going in his set work, crafting a shocking bright blue and purple color scheme on the walls with tacky lightning bolts to further accentuate the time period. The moving thrust-forward platform that serves as Hart’s office is a brilliant staging device akin to what you’d see on Broadway, easily doubling the space of the stage without much effort. It also serves as a humorously symbolic representation of how Hart is constantly trying to smoothly slide his way into his secretaries’ lives in the most lewd and unctuous ways possible.

Costumes designed by James J. Fasching were equally period appropriate, all the right eye-popping colors on the women to make them more noticeable amid the dreary gray of corporate America. Fasching kept the dresses and skirts well fitted into the tight time frame of the show and even incorporated some really fun numbers for the dream sequence dancers, the cowgirl outfits come to mind as particularly impressive.

The biggest issue with this show was the overall pacing and lack of energy. At my performance, Director John Desmone failed to keep the show progressing at a pace that would maintain the audience’s attention. Often scene changes would be complete with the orchestra holding, but the audience would remain lingering in darkness. The spoken scenes between musical numbers also dragged along at a crawl. Desmone’s guidance of the main trio of women was lacking as well, as the tightly-knit bond required of these three characters to function in the latter half of the show as friends was mostly absent. Individually the trio of women had great personalities that were well-defined, but they were unable to make connections with each other as characters.

Musical Director R. Christopher Rose had similar problems with aligning the tempo to the highly energetic musical numbers of the show. This went hand in hand with the sluggish execution of the choreography, which is a shame because the routines designed by Bambi Johnson seemed to fit the style of the show, but needed much more energy to be effective. Rose did, to his credit, elicit some impressive sounds from a few of the women in the show, redeeming some of the slower moments with their powerful solo numbers.

The two scene-stealing performers popping their heads in minor character roles were Dwayne (Henry Reisinger Jr.) and Roz (Allie Dreskin). Reisinger Jr. is featured only briefly as the country-western cowboy husband of Doralee, but he makes every moment of his presence count, especially when it comes to his exaggerated accent and physicality. Dreskin as the snooty chief assistant to Mr. Hart is the epitome of comic relief in what should be a laughable musical. Embodying the ancient character to perfection she really lays it on thick in “Heart to Hart” – a solo that leaves the audience roaring with laughter. She takes control of her character in this number, and every other moment she’s on stage, and really lets her voice and body have the run of the show, belting fiercely at the end of the song, and playing up the overt sexuality of the character’s latent desires.

Franklin Hart (John O’Brien) is the typical chauvinistic male boss of the era. O’Brien does an exceptional job with the role, creating a sleazy slithering snake of a character that’s oversexed and not bashful in the least when it comes to his drive. His solo “Here For You” is fully loaded with lascivious implications that he carries out with a grotesquely sexual flare. He makes for quite the character, making his demise that much more rewarding when the women finally get their way with him.

The main trio that the story revolves around is Judy (Brenda L. Tackett) Doralee (Carli Smith) and Violet (Nancy Parrish Asendorf). Despite the lack of strengthened bonds they each find their moments to shine, particularly during the fantasy sequence in Violet’s living room. Their voices blend solidly, even if the harmonies at times are muddled, and they do have strong emotions in their characters which they easily access for the audience.

Tackett, as the nervous new girl in the office really shows off her stuff in “Dance of Death,” a swanky and sultry little number that allows her to really get into the rhythm of the song with her hips and her lips. While the tempo for her duet “Get Out and Stay Out” is much slower than the song’s nature is implied she does a decent job of expressing her feelings in this song.

Taking on the leadership qualities of Violet with ease is Asendorf, really sinking quite easily into the exasperating nature that flows within the character. Her comic approach to “Potion Notion” is a real scream, the little princess dance and song routine earning a few good chuckles from the audience. She is the strongest of the trio in their song “Around Here.” 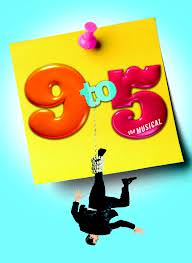 Carli Smith, as the simple country cowgirl, is an exceptional performer, radiating energy, light and excitement when on stage. Her voice is a powerhouse that easily out-belts every other person on the stage. Her rendition of “Backwoods Barbie” maintains her slow drawn twang while never compromising the pace of the song. “Shine Like the Sun” gives Smith the chance to showcase her true vocal prowess; a true delight to hear as she comes out on top in this number. A brilliant performance is given by this talented actress, really sparkling brightly in this production.

Running Time: Approximately 2 hours and 30 minutes, with one intermission.

9 To 5 plays through November 3, 2013 at Dundalk Community Theatre at Community College of Baltimore County in Building K, at the John E. Ravekes Theatre – 7200 Sollers Point Road, in Baltimore, MD. For tickets, call the box office at (443) 840-2787, or purchase them online.