Theater J is pulling out all the stops in its current and very polemical production of playwright Alexandra Gersten-Vassilaros’ The Argument. Directed with a tight, concise flair by Associate Artistic Director Shirley Serotsky, this extremely relevant play grips from the beginning to the end.

This absorbing play deals with the questions of free will, morality, conscience, and choice as a middle-aged domestic couple grapples with an unknown future when the main character, Sophie (Susan Rome), learns that she is pregnant and her partner, Phillip (James Whalen), have decidedly differing views on whether or not to have the child. This argument threatens to tear away at the very loving and caring relationship these two characters have established and their scathing attacks on one another mirror the disintegration of agreement and compromise that we see in our politics and society today. The intimate and stark hurting of these two characters draws one into asking very serious questions about what is important in a loving relationship.

The vital questions and dilemmas posed by this intelligent text, drew playwright Gersten-Vasillaros to revisit this play with a fresh eye – after its 2005 run at the Vineyard Theatre in New York City – exclusively for Theater J. Director Shirley Serotsky runs her two characters through their paces by alternating the tone of the play very appropriately from the sensuous languor and visceral physicality of the opening scenes to the day-to-day struggles of the couple and, finally, to the scorching and somber final scenes. Serotsky captures the challenging mood of this play in which one is constantly questioning the crux of an argument, and the eternal questions of what is right or wrong are played out against what some might view as a matter of opinion.

As Sophie, Susan Rome steals the show with a very endearing, yet strong presence. Her movements are sensuous and catlike as she beckons from the bed or shows off her new refrigerator. Rome knows how to deliver a line with panache and intrigue. She is absolutely compelling in the scene where she fights for her self-respect and dignity when she feels her reason is not valued – and that she is being made to hate somebody she loves. Following close behind her is James Whalen as her partner, Phillip. Whalen has a confident authority on stage that he shows to good advantage and he never overplays when it might be tempting to do so. Rounding out the cast is the therapist, Herb (Jefferson A. Russell) and, indeed, Russell is a commanding presence with a wonderfully developed speaking voice.

The prolific Eric Shimelonis (recently doing Sound Design chores at Studio’s Torch Song Trilogy and Round House Theatre’s The Beauty Queen of Leenane and This) aids the play immeasurably as he pulls the audience into this world of domestic and strife with staccato beats of music that add to the contemporary mood of the play. The intricacy of the music complements the sensuousness, complexity, and urban angst of the characters.

Scenic Design by Robbie Hayes is a marvel to behold. The three colorful panels at the top of the set capture the fluidity of city life and the kitchen and living quarters he has designed are extremely eye-catching in their economic, yet encompassing utilization of the stage space.

Lighting Designer Martha Mountain envelops the stage with lighting that is in complete synchronization with each piece of text. Her timing of the successive blackouts between scenes is effective, economic, and never intrusive to the proceedings. Costume Designer Erin Nugent perfectly captures the mood of the play with the appropriate attire.

Theater J will have audiences arguing about the issues presented in The Argument! Don’t miss this fine production. 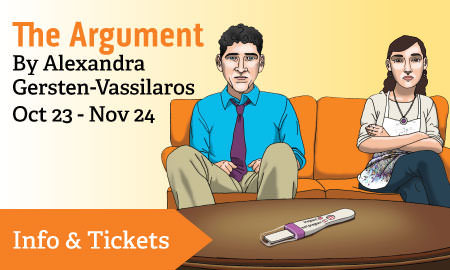