After working as an actor and director in the DC area for more than 30 years, and after teaching at both Catholic University and Howard Community College for years, I joined the George Washington Department of Theatre and dance as an adjunct instructor in 2008. But my association with the department goes back much before that– the Washington Stage Guild has had connections to GW since our first show in 1986, in which Alan Wade, a GW professor, played Uncle Vanya. Since then we’ve used GW actors, directors, and in recent years, many designers. Thanks to that relationship, I have had the pleasure of directing five plays for the department since 2002: One Flea Spare, Allyson Currin’s Learning Curves, Blithe Spirit, An Evening of Beckett, and now, opening Tonight, October 31st, Twelfth Night.

One of the marks of Shakespeare’s genius is the breadth of possible approaches his plays invite. In the four centuries since his death, production styles and concepts have expanded to the point that now, when you say you’re producing a Shakespeare play, the first question you get is “What are you doing with it?” Hamlet on Wall Street, The Taming of The Shrew in the Wild West, Julius Caesar in modern Iraq, and just about any other setting from the Stone Age to outer space have been done. And, let me hasten to add, often have unveiled nuances and implications in these complex works that had never been considered before. But the opening of the restored Globe Theatre in London has demonstrated something almost forgotten: these plays were originally tailor-made for a specific kind of space and style of playing, one where a bare platform with several levels left scene changes to the audience’s imagination, and where that audience was invited in with asides and direct address (the many soliloquies become natural in a theatre where the audience surrounds the stage and is visible to the actors). “Original Practice” is a term that has arisen as directors attempt to recreate a more Elizabethan experience of playgoing. I teach theatre history at GW, so it seemed appropriate to present Twelfth Night in a way that is a nod to the way it would have first been seen. (Not completely, since that would mean an all-male cast. But we acknowledge the historical gender-switch in the casting of Orsino’s court).Twelfth Night takes place in Illyria, in Croatia on the Dalmatian coast, in a very ambiguous era where Puritans thank Jove and Mediterranean nobles mingle with distinctly British revelers. Perhaps a company of English actors have set up a stage in a Croatian courtyard, mimicking the Globe without recreating it, for the amusement of the expatriate community? The play is from the middle of Shakespeare’s career, probably about the same time he was writing Hamlet. The Danish prince’s melancholy lightly pervades Feste’s songs, and with the cruelty shown to Malvolio, Shakespeare was finished with pure comedy; the remaining comic plays are either darkly ambiguous (Measure for Measure, All’s Well That Ends Well) or fantastic, conciliatory tragicomedies (The Winter’s Tale, The Tempest).So–what does the title mean? It’s long been thought that the play was first performed at Epiphany, the “Twelfth Day of Christmas” that ended England’s holiday season, and the play is filled with gift-giving typical of that celebration, but that’s only speculation. The sub-title, What You Will, implies that the play means whatever we want it to mean. What will you? 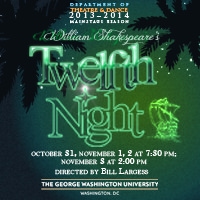 Here’s the cast of Twelfth Night:

MADISON AWALT* (Feste) is a junior acting PSA majoring in psychology and minoring in theatre. This is her 2nd MainStage production.

JOSH BIERMAN (Captain) is a sophomore from New York City majoring in dramatic literature with a minor in journalism. He is an active member of student theater at GW and is excited to appear in his first MainStage show.

ANDY BROWN (Sir Toby Belch) is a senior majoring in English. This is his first MainStage production.

BEKAH EICHELBERGER (Maria) is a junior theatre major and anthropology minor from Bethlehem, Pa. She is thrilled to be making her MainStage debut.

HADLEY FIELDING (Valentine/Lady to Olivia) is a junior from Lake Bluff, Ill. She is pursuing an English major and a theatre minor, and tutors at GW’s Writing Center. This is her 2nd MainStage production.

RACHEL MATUSEWICZ (Olivia) is a senior studying history, political science, and theatre. She has performed in numerous GW productions, but is honored to be making her MainStage debut.

HENRY MORILLO (Sir Andrew) is a senior in SMPA and a theatre minor. He is very excited to be in his first MainStage production after having previously served as the Artistic Director of Generic Theatre Company.

MATT NICKLEY (Malvolio) is a senior dramatic literature major from Norwood, Mass. This is his 4th MainStage production. He is honored to have worked with another incredible cast and crew.

NICHOLAS ONG (Fabian) is a junior from San Mateo, Calif. majoring in theatre with a minor in journalism. This is his 2nd MainStage production. He last appeared in Almost, Maine. He is additionally involved on campus as the sports editor for the GW Hatchet.

MAX SCHWAGER* (Priest) is a senior acting PSA majoring in theatre and journalism from Kingston, Pa. This is Max’s 6th time acting on the MainStage. Select credits include Schultz in Circle Mirror Transformation, Abner Dillon in 42nd Street (CLOC) and Czolgosz in Assassins (FPP). Max will next be seen as Editor Daily in the spring MainStage production of The Cradle Will Rock.

CAITLIN SIMPSON* (Viola) is a senior acting PSA from London, UK, majoring in theatre and minoring in psychology. She was last seen on the GW MainStage as Emma in Jane Austen’s Emma. This is her 5th MainStage performance.

LUKE SMITH (Sebastian) is a senior computer science major. He is very involved in the GW Shakespeare student organization and is very enthusiastic about performing in a MainStage Shakespeare show.

ALEXANDRIA TALIAFERRO* (Curio/Lady to Olivia) is a sophomore acting PSA student majoring in theatre. She has worked both onstage and behind the scenes in numerous shows at GW, including Sweeney Todd and the 2012-2013 GW Directing Projects. This is her first Shakespeare production.

COURTNEY WADE (First Officer) is a senior majoring in psychology and minoring in theatre and biology. She has been heavily involved in the student theater community since freshman year and is excited to be part of her first MainStage show.

JON WEIGELL (Antonio) is a sophomore in the Columbia College of Arts and Sciences. This is his first MainStage production. He is thrilled to be part of such a wonderful cast.

MAXTON YOUNG-JONES (Count Orsino) is a senior dramatic literature major. He has acted for local theatre projects including the Safe Street Foundation for The Kennedy Center’s Page to Stage festival and Dolce Revolution at the Washington Arts Club. This is his 4th MainStage production.

Here are the designers of Twelfth Night:

SARA ABDULGHANI (Costume Designer) was born and raised in Saudi Arabia. She is a graphic designer, as well as a video and installation artist. She graduated with a BFA from American University in Dubai, and she is currently seeking an MFA in production design at GW. She has assisted on many MainStage productions such as Hair, DanceWorks, Sweeney Todd, and Emma.

ANDREW FLURER (Sound Designer) is a junior from West Chester, Pa. He is a double-major in theatre and chemistry. This is his 3rd time performing tech for the MainStage. Andrew has played Dwight in Dead Man’s Cell Phone and various roles in Almost, Maine.

CELESTE HARRISON* (Assistant Stage Manager) is a sophomore tech PSA from Ottawa, Ill. She is currently studying public health and theatre. This is her third MainStage production.

CARL F. GUDENIUS (Scenic Designer) holds an MFA in design from Wayne State University. In addition to teaching scenic and lighting design at GW and directing its Graduate Design Program he is an active professional designer (USA 829). He is the resident designer for The Washington Stage Guild; he is also Principle Designer for DCP/Design Concept Presentations, LLC. Recent work has included Art Direction/Production Design for ABC (including Good Morning America and Nightline), C-SPAN, PBS’ (including In Performance at the White House), Discovery. He is also Production Designer for The US Army’s touring pageant Spirit of America. His scenic and lighting work has been seen at many Washington theatres including The Kennedy Center, Olney Theatre, MetroStage, Church Street Theatre, Horizons Theatre and Interact Theatre. Corporate production design for industrial projects has included recent work for Sony, Accenture, MedImmune, McKesson, Choice Hotels and Barnes & Noble. He owns Veritas Scenic, a union (IATSE local 22) production shop that provides full fabrication services to a diverse clientele of theatrical, corporate and video producers.

MADELINE LOUDEN (Props Master) is a junior majoring in theatre. This is her first time working as part of the production team and has both enjoyed and appreciated the opportunity to learn the ropes with such a fun and committed group.

MICHAEL MCMANUS* (Stage Manager) is a senior design PSA majoring in political science. He has worked in various capacities for over 45 productions in D.C., and Washington state. He is excited to be stage managing with such a great cast and crew for his senior year.

CATHERINE MULLINS* (Assistant Stage Manager) is a freshman PSA student from Atlanta, Ga. who plans to double major in journalism and theatre. She is thrilled to begin her freshman year with such an amazing cast and crew.

RACHAEL ANNE PACE (Technical Director) is a first year graduate student from Covington, La. She recently graduated from Louisiana Tech University where she received a BA in theatre and dabbled in many aspects of theatrical design performance, and stage combat, and is recognized in eight weapons with the SAFD. She is excited to be in D.C. and at GW.

AARON POLLON* (Lighting Designer) is a senior design/tech PSA from Pittsburgh, Pa., majoring in economics and computer Science. He previously designed for the MainStage, including New Plays Festival’sWild 42 Hold, DanceWorks and assisted on Sweeney Todd. He also worked on Capital Fringe’s One Night In New York and freelances as an electrician around the D.C. area.

KAT RIASCOS* (Assistant Stage Manager) is a freshman PSA in acting. She plans to major in psychology and minor in theatre. This is her first MainStage show.