Is it possible to engage in S&M and appear heartwarming at the same time? The answer is ‘yes’ if you are in the cast of Bondage by Pinky Swear Productions.

What an excellent contrivance! People might go to this play just for the title, but they are also going to peel away race roles, and when they leave they will feel like an unfettered citizen of the world.

Written by David Henry Hwang, of M. Butterfly fame, and directed by Toni Rae Salmi, it is billed as a race play/love story. The actors’ races are unknown because they are dressed in morph suits that cover their heads and bodies. Their names are being withheld at the request of the theater company in order to prevent prejudice. A program is available after the show.

Mark, played by Actor B, crawls onto stage wearing a dog collar and a morph suit with zippers in strategic places. If he had not looked so much like C-3PO from Star Wars he would have been intimidating. But Actor B’s comfortable body stance and down-to-earth delivery makes for a sincere person.

They have three exchanges, playing a different race in each, in which they vie for the upper hand psychologically. Teri tries to leave a mark by tearing into him, but their parries are mostly verbal ones designed to reveal each other’s prejudices. The dialog is so full of philosophical nuggets that it could have been slowed down a little to allow it to sink in better.

But speed doesn’t lessen the emotional effect. At one point, I found myself feeling, to my relief, like it doesn’t matter who or what we are, where we came from or where we’re going in life. We are all everything, which erases all judgment and all role limitation, whether self-inflicted, coming from others, or directed outward. It was like having my heart burnished to a fine, coppery sheen, and it burned like a coal in my chest for the rest of the night.

My heart already had been laid bare – by fear – for the very polishing that it was about to receive. The counter attendant wore a black hood and face stocking delineated only by a pig’s snout. A lady in a red corset tapping a riding crop against her palm gave strict instructions not to touch anyone when we entered The Parlour, which was part of the performance. The walls of the hallway to this den of inequity had little black curtains that I was afraid to lift until afterward. Don’t make the same mistake, because it will prepare you for the cast of eight characters who are just inside. Directed by Amy Couchoud, they posed around a dusky lounge wearing costumes of leather, satin and lace by Liz Gossens. We grabbed a cup of rot-gut rosé wine to brave the interactions, but luckily the show was about to begin.

The set by Chris Holland featured an X-shaped bondage/torture frame. Props by Sarah Conte featured a trunk full of costume accoutrements such as eye glasses, bow ties, and necklaces, and a rack full of various whips, reams of clothespins, and a feather boa, as well as a table, and a raised stool.

Would the audience be asked to participate further? Physically? Maybe. Emotionally? Definitely. Sit back, resistance is futile. Go to the show. You will come out a different and better person.

Running time: One hour with no intermission. Allow more time at first for The Parlour. 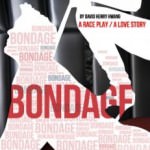