To say that I enjoyed Howard University’s production of Lynn Nottage’s Fabulation or, The Re-Education of Undine is an understatement. The moments of both genuine truth and beautiful storytelling took me on a wonderful journey. Directed by Raymond Caldwell, Fabulation tells the story of Undine, a successful business woman whose life unravels when her lover takes off with her savings and leaves her poor and pregnant. With the loss of her success and the destruction of her reputation, she is forced to move back in with her blue collar family whom she has not seen in fourteen years.

The success of this production is based entirely on the phenomenal performances of its seven actors. Almost all the actors play several characters which could have of lead to some confusion, but each character is played with distinction and dedication, thanks in part to fabulous dialect coaching by Yasmin B. Thomas. Most notably is Nedra R. Snipes, who plays the role of Undine with strength and ease. At first, the character seems unlikable and over-the-top but Snipes does a wonderful job portraying the characters journey from cocky confidence to exposed fragility. Snipes handles Nottage’s script with grace and is able to truly connect with the audience during the character’s lengthy asides. She dominates the stage and is definitely a young actress with a great deal of talent. Other notable characters include Undine’s “diabetic” grandmother (Jasmine Ayani) and Undine’s charismatic brother Flo (Douglas Ruffin). 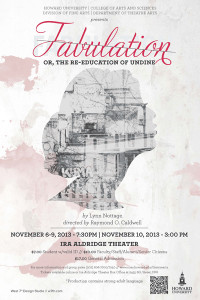 The show is directed with an emphasis on storytelling and character development. Caldwell’s direction is very well communicated through the show’s simplistic set, designed by Michael Stepowany. Stepowany uses only a few bare flats, furniture, and several props (designed by Gregory Johnson) to help communicate the world of the play to the audience. The set is intended to not necessarily communicate a detailed description of the plays environment, but instead to serve as a symbol to imply a certain location. One of the flats is fitted with a scrim that could be lit from behind to expose actors at various moments during the play. While this gives the actors and director the ability to differentiate space on stage, at times, it distracts from the already established simplistic design theme.

The simplicity of the set and the richness of the characters is only strengthened by the costumes, lighting, and sound design. Lighting Designer TW Starnes helps to bring focus to the massive stage and allows for comedic moments during the shows many asides. The music throughout the show, also designed by Starnes, helps to successfully feed the audience information about location and sets the mood for Undine’s extravagant lifestyle (and attitude) at the beginning of the show. The music also provides comedic moments, most notably during the prison scene. Wig and hair design by Gregory Bazemore and choreography by Jeffery Glenn helps make the actors’ performances that much more rich and entertaining.

Fabulation or, The Re-Education of Undine is fabulous. The director, the cast, and designers provide an honest and touching production that teaches the audience a valuable lesson about redemption and self-acceptance. The powerful student performances are impeccable and detailed, which is a joy to watch.