Signature Theatre announced that they will be opening their 25th anniversary season with Stephen Sondheim’s Sunday in the Park with George.

Directed by Associate Artistic Director Matthew Gardiner and staged in the MAX Theatre, this production marks the first time Signature has produced the play since the theatre’s co-production with Arena Stage in 1997.

“Sunday in the Park with George is the perfect start to our 25th anniversary season,” said Artistic Director Eric Schaeffer. “In a season that will celebrate the many great artists we have collaborated with over the years, Stephen Sondheim tops the list, with Signature having done 23 productions of his work. It will be wonderful to bring La Grande Jatte into the intimate 276 seat MAX Theatre. It’s the first of many special productions to celebrate our 25 years of groundbreaking work.”

Written by the team behind Into the Woods and Passion, the show is inspired by the famous 1884 pointillist painting “A Sunday Afternoon on the Island of La Grande Jatte” by Georges Seurat. Sunday in the Park with George brings art to vibrant life in Sondheim’s stunning masterpiece, which features the songs “Finishing the Hat,” “Move On,” “Children and Art” and “Putting it Together.”

The musical opened on Broadway in 1984, where it received two Tony Awards for Best Scenic Design and Best Lighting Design. The Pulitzer Prize for Drama followed in 1985, making Sunday in the Park with George one of only eight musicals to ever win the prize. The show has also received the New York Drama Critics Circle Award for Outstanding Musical, numerous Drama Desk Awards, and the 1991 Olivier Award for Best Musical.

Signature’s production kicks off the theatre’s 25th anniversary season, which will feature numerous special events throughout the year in addition to seven fully produced shows, all in celebration of the artists and collaborators that have called Signature home over the course of 25 years. 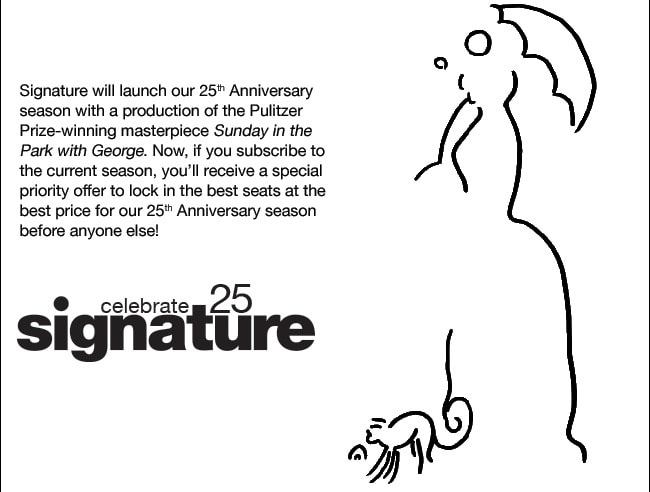