PortCity Playhouse presents Shiloh Rules by Doris Baizly and produced by Mary Beth Smith-Toomey. Smart writing tells the story of a Civil War re-enactment by a group of women. They’re in a National Park in modern day Tennessee reliving the Battle of Shiloh which was the bloodiest battle of the Civil War. It’s a behind-the-scenes look at the people who participate in “living history” events. It’s from the perspective of 5 female re-enactors trying to keep the authenticity of women’s roles during the battle. The 6th female cast member is the park ranger who is trying to enforce the modern day rules of the park.

Light design by Chris Hardy was kept simple. Dim lighting was used throughout to set the tone of nighttime in the park. Bright lighting was used to evoke the drama of the battlefield. Sound design by Sean Doyle was very effective. Though somewhat distracting to the audience, loud noises signifying cannon and gunfire during the battle re-enactment enhanced the feeling of the chaos that the characters are experiencing in the play. Sound and lighting worked together in harmony to create the effect of thunder and lightning in Act 2.

Mary Ayala-Bush, the director also did the costuming and set design. The set design was 2 simple canvas tents on either side of the stage representing the North and South.

Costuming was authentic. The women wore long skirts, corsets, petticoats, white aprons, small capes and boots. The park ranger wore a brown uniform complete with walkie-talkie, hat and flashlight. She presents the play in the round. The staging of the story moved smoothly. She also maintains the dramatic themes of the play thru the debate of the reasons behind the war while keeping the ladies sarcastic humor alive in the lighter moments. Comedy and drama converge when these 6 women meet in the park on the battlefield.

Widow Beckwith (Adriana Hardy) shuffles onto the stage pushing her shopping cart of wares and ice cooler of refreshments. Ranger Wilson (Nyla Rose DeGroat) marches onto the stage with the aura of the sarcastic modern world wondering “why are crazy people doing this?” mentality. These two were the highlight of the production. They stole every scene they were in and brought the laughs with them.

Ranger Wilson, an African-American views the re-enactors as “loons”. Why would they want to relive that period of history? It causes major inconveniences in her park as she tries to hand out tickets to the ladies for various infractions. Widow Beckwith is a senior citizen who is a member of the authenticity committee going around to the various “living history” events selling her refreshments and souvenirs.

They had great comedic timing and chemistry in their scenes together. At one point, Ranger Wilson asks Widow Beckwith “Yank or Reb?”

She replies, “Oh no, I’m not playing in this. Just profiteering! Here to make the good old U.S. Greenback and keep things authentic.”

Clara (Jean Hudson Miller) and Cecilia (Karen Lawrence) are middle aged ladies who take the re-enactments more seriously. They compete each year for the award of best re-enactor. Clara is the reigning champ on the Union side with the nickname of “Angel of Antitam.” Cecilia is a mystery woman who appears to take living in 1862 on the South side too realistically. They provide the focus of the drama in the story with their rivalry and insistence on staying true to their 1862 characters. They each have a younger protégé under their wings. Meg (Jennifer McClean), a nursing student in real life, is participating in order to gain extra credit in her classes on the North side.  Lucygale Scruggs (Shaina Higgins) is an over-eager young girl who thinks this may be a way to combat the rut of her everyday life on the South side. In the middle of Act 2, the two younger ladies come into their own, maintaining the authenticity of the event when their older role models have started to give up. They have a great dramatic scene after Lucygale is accidentally shot for real and Meg must attend to the wound using the Civil War supplies at hand.

The play was both lively and memorable. I recommend it, especially to anyone who is a fan of re-enactments or happens to be a civil war buff. It’s an amusing look at that world to someone who has been exposed to it. And a great reminder that women helped shape history during wartime.

Running Time:  It is 90 minutes, with a 15-minute intermission. 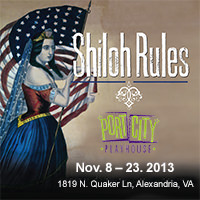 Shiloh Rules plays through November 23, 2013 at Port City Playhouse – 1819 North Quaker Lane, in Alexandria, VA. For tickets, purchase them at the box office one hour before the performance or online.