Marvelous—such a musical treat! Three fantastic acts, all for the price of one admission. Blues with a world perspective greeted patrons on Friday evening, November 15, 2013 at George Mason University’s Center for the Arts in the artistry of the legendary Taj Mahal (born Henry St. Clair Fredricks, Jr.). Joined by famous South African folk-singer, anti-apartheid poet-activist Vusi Mahlasela; Taj’s daughter, Deva Mahal and her band Fredericks Brown; Taj led us on an auditory stroll through world music from the Caribbean, Africa, and the South Pacific, among other international locations.

It’s been said that Mahal has done much to reshape the definition and scope of blues music over a nearly 50-year career by fusing it with nontraditional forms. But just what is “World Blues” you might ask? Though not easily classified due to its inclusive nature and elasticity as a musical genre, it is many different styles of music from around the world, where cultural traditions intermingle with contemporary music. World blues has also been described as a celebration of the global influence of American blues music, as seen from distinct points of view and international points of origin. Audiences will hear folk music, reggae, calypso, jazz, zydeco, rhythm and blues, gospel music, and country music as well as foreign languages and dialects—all serving to showcase Mahal’s unique vocal range described by author David Evans as gruff and gritty to smooth and sultry.

Considered to be a scholar of blues music and commenting on his own musical style, Mahal believes that the blues is not just about wallowing in negativity and despair. Mahal says, “You can listen to my music from front to back, and you don’t ever hear me moaning and crying about how bad you done treated me.”

The set opened with Deva Mahal and the Fredericks Brown Band, whom some consider one of New Zealand’s premier female vocalists (soul/gospel, urban/R&B, Funk, and Hip Hop/Rap) since her move there in 2001 at the tender age of twenty-four. Before she had even sung one note, I thought, “Now how cool is that?” But I digress, the proof of her undeniable natural talent was immediately evident from the first note she sang.

Accompanied tonight by her keyboardist, New Zealander Stephanie Brown (Fredericks Brown band, sans guitarist Michael Taylor), Deva with tambourine in hand soulfully took full command of the stage and audience for over thirty minutes, singing an R&B tune “Can’t Pretend,” just released by Glass House Mountains (10/11/13) and followed by a foot-stomping, body-swaying rhythmic tune “What Lies Within.” The mesmerizing lyrics in the first verse nailed me to the wall: “Tell me what you’re putting on the table, ’cause I’m so tired of laying my heart on the line/ You better think ’bout taking me for granted, ’cause I ain’t afraid to pack my bags and leave this all behind.” Now that’s making it plain, I’d say.

After that audience warm-up Deja removed her jacket, instructed the lighting technicians to turn down those hot lights, and got into one of my most favorite songs and artist, singing Bonnie Raitt’s “I Can’t Make You Love Me If You Don’t.” Is there anybody out there who does not know the words and have not sung them to themselves, or at least had the words sung to them at one time or another in their lives? I doubt it. Deja’s final selection, a song about freedom, resonated with me also; titled “Everybody Deserves to Be Free.” Partial lyrics, “I will stand for you would you stand for me, I will lend a hand to you, will you lend a hand to me?”

Vusi Mahlasela, folk singer, world troubadour and poet-activist, was a pleasurable surprise for me tonight. I had only briefly heard of him in terms of South Africa’s apartheid. Mahlasela recorded his first album When You Come Back over twenty years ago and the title track became an anthem in South Africa, especially for his many friends who had fled South Africa.  He subsequently became known as “The Voice” as his country fought to end apartheid.

It was not difficult to get the audience to sing along as he danced for the joy of his homeland as he played acoustic guitar and sang “Say Africa.” He also sang “Two Birds” and dedicated “My Song of Love” to the women of South Africa. Although I could not understand every word, he sang beautifully in Zulu and English. The funny thing about that is that it did not matter, proof that singing from one’s soul is universal, even without understanding all the words. To speak even briefly about the pain of his life experiences (eyewitness to the Soweto massacre; victim of apartheid, police harassment; loss of friends, to name a few) yet have the resilience to be eternally optimistic he portrayed the same South African spirit I saw on a visit there in 2007. He also emphasized the universal need for Ubuntu (kindness) everywhere on the planet in “A Prayer For Our Time.” I liked that his songs were upbeat, hopeful, optimistic about the future.

Mahal’s next two tunes got most of the audience clapping, “I Used to Be Down (But I Ain’t Down Anymore)” (2013) and the bouncy “Checkin’ on My Baby” (1968). I enjoyed them immensely and wished he would play them again. On ukelele, Mahal performed the graphic song “Wild About My Lovin’” whose lyrics were bound to put romantic ideas in people’s heads. 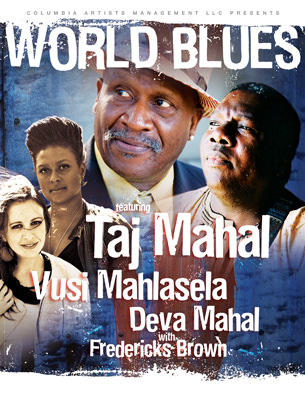 Mahlasela then joined him in the world-music acoustic guitar duet “Zanzibar” (2008) a combination of blues and Mehlasela’s African rhythms. Finally, Deva returned to the stage to duo a crowd favorite “Lovin’ in My Baby’s Eyes (1996)” with her father playing a copper-colored resonator guitar. Like-father like-daughter, both Mahals are physical artists; he shuffle/dances around at times and puts his hips into it while playing his trademark groan (“Unh!”) while Deva, sporting a tambourine, slaps it against her thigh as she dances oblivious to everything but the music in her head. The trio delivered a final song, a touching rendition of “Everybody is Somebody” (1987).

World Blues featuring The Taj Mahal Trio, Vusi Mahlasela, Deva Mahal, with Fredericks Brown played one night, November 15, 2013 at George Mason University’s Center for the Arts – 4373 Mason Pond Drive, in Fairfax, VA, but continues on a national tour. For future performances at The Center for the Arts, check their calendar of events.