I had a wilde-ly good time watching the brilliant cast of the United States Naval Academy’s The Masqueraders perform Oscar Wilde‘s popular The Importance of Being Earnest, A Trivial Comedy for Serious People. The young group of actors were having so much fun performing Wilde’s crazy cast of characters that their joy was infectious. This wonderful production, which is in shipshape, reminded me why this hilarious and witty comedy is still loved by audiences 118 years after it opened in London. Every glorious Wilde word was delivered like poetry. And sitting in the elegant Mahan Hall – I felt like I transferred back to Victorian England dropping in for tea.

If you don’t know the plot (and there many twists and turns like you’ll find in a Gilbert and Sullivan operetta), here’s what you need to know about this three-act farce without me giving away the surprising endings and major ‘unveilings’:

Algernon Moncrieff (James Frevola) greets his best friend John Worthing (Jonathan Lucas), who he knows as ‘Ernest,’ who has come to propose to Algernon’s cousin, Gwendolen Fairfax (Jamie Moroney). Algernon is reluctant to grant his consent until Ernest explains to him why his cigarette case has the inscription, “From little Cecily, with her fondest love to her dear Uncle Jack.” ‘Well, let’s just say that John and Ernest’s lives are not what they seem to be and are intertwined with two chaps named Jack and Bunbury.

Enter Gwendolen and her stern mother Lady Bracknell (Jett Watson), who interviews the prospective son-in-law-to-be, and is – predictably – not impressed. Now enter Cecily (Jenn Underhill) and her governess Miss Prism (Megan Rausch), and Dr. Chasuble (Chris Hudson), who all have love on their minds. But will they ever really find true love? Will they ever figure out what the heck is going on? You’ll have to come to the final two performances this weekend on Friday and Saturday, November 22nd and 23rd, to see if any of these characters turn out to be ‘Earnest’ and earnestly in love.

Director Professor Christy Stanlake receives superb performances from every member of her talented cast. Underhill and Moroney are perfection as the hopeful but confused bride-wannabes. Frevola and Lucas have great chemistry and play off each other beautifully – like two brothers engaging in constant sibling rivalry. Watson is an elegant and assertive Lady Bracknell and often had me and the audience in stitches after his biting delivery of Wilde’s funniest lines. Watson looks stunning in the dress and hat and shoes designed by Costume Designer Richard Montgomery, who also designed the colorful set. Montgomery utilizes stripes, glitter, flowers, and other colorful visual delights, and each dress or shirt or coat or suit perfectly reflects the characters’ personalities – you are what you wear! And some of the clothes brought some loud laughs from the audience.

Montgomery’s effective set easily transformed itself from a small flat to a beautiful garden to a drawing room in the three acts.The colorful props looked like Montgomery had raided a group of thrift stores and flea markets, and echoed all the confusion the characters were creating and experiencing in the story. After the show, I chatted with Mr. Montgomery who confirmed that he had gone ‘shopping’ for the spears, the zebra and leopard skins, and other props that covered the sofa/love seat, and for many of the other props used in his unique set. I would have loved to have been a ‘fly-on-the-wall’ when he was shopping for these tchotchkes (knickknacks). I adored the set and admired all the work that went into building it and giving it that unique look.

There were so many lovely moments in the show but my favorite was watching Rausch and Hudson’s faces light up and beam as their hands locked as they prepared to take a loving walk together arm-in-arm. It was one of many touching moments provided by Director Stanlake and her cast that made this production so moving and so special.

Kudos to Lighting Designer David Johnson and Sound Designers Blake Nixon and Jonson Henry for their excellent work. And a special congratulations to Dialect Coach Leith Daghistani and to the cast for their perfect diction and enunciation. This is the first production of this play where I could understand every word by every actor. It’s an incredible accomplishment and much appreciated.

I will be very earnest with you – I highly recommend you make a trip to Annapolis this Friday or Saturday night to see this amazing cast in this very entertaining production of The Importance of Being Earnest. I am so glad I did. 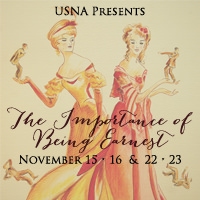 The Importance of Being Earnest has two more performances this upcoming Friday and Saturday, November 22nd and 23rd at 8 PM at Mahan Hall at The United States Naval Academy – inside Gate 3 – on Maryland Avenue, in Annapolis, MD. For tickets, call the box office (410) 293-TIXS / (410) 293-8497, purchase them at the door, or online. Here are directions.