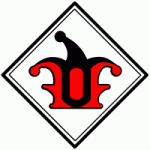 Masks, acrobatics, humbug, and holiday cheer abound in this modern retelling of the Dickens holiday classic, written and directed by two-time Helen Hayes Award nominee Matthew R. Wilson. When Pantalone Scrooge is visited by his old friend Dottore Marley, an unforgettable adventure of ghosts, yuletides, and omens sets the greedy old man on the rocky road to redemption. Dickens’s London comes alive in a new way with a Commedia twist and a fresh new script. A Commedia Christmas Carol is a treat for the whole family and a hilarious, heartfelt celebration of the holiday season.

For more information on the event, visit http://www.factionoffools.org/ccc 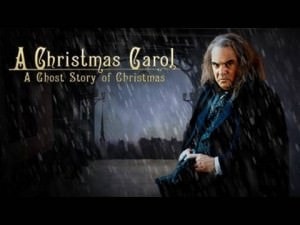 Join the ghosts of Christmas Past, Present, and Future as they lead the miserly Ebenezer Scrooge on a journey of transformation and redemption. Originally conceived by Michael Baron, this music-infused production captures the magic and joy of Dickens’s Yuletide classic. Acclaimed Washington stage actor Edward Gero returns to play Scrooge.

Seats for a captioned or sign-interpreted performance can be purchased through Ticketmaster online or via phone at (800) 982-2787 or in person at the Box Office. 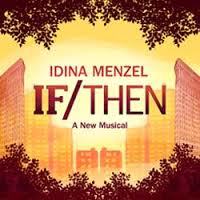 Idina Menzel stars in the Broadway-bound original musical, If/Then, which reunites Tom Kitt (music), Brian Yorkey (book and lyrics), and Michael Greif (director), the creative team behind the Pulitzer Prize and Tony Award-winning musical, Next to Normal.  On the verge of turning 40, Elizabeth (Menzel) moves back to New York City, the ultimate city of possibility, intent on a fresh start – new home, new friends, and hopes for a resurgent career. But even in her carefully planned new life, the smallest decision or most random occurrence will impact her world in ways she never dreamt possible.

In honor of the International Day of Persons with Disabilities, VSA, an international organization on arts and disability, will present an evening of classical Indian and Pakistani music featuring Zohaib Hassan and Abhik Mukherjee.

Zohaib Hassan is the winner of the 2013 VSA International Young Soloist Award. He will play on sarangi, a stringed musical instrument of India that is played with a bow and that has a tone similar to that of the viola. Hassan will be joined by Abhik Mukherjee, a world-renowned sitarist, vocalist, and composer, on sitar accompanied by tabla and tanpura.

The performance is free and open to the public; seating is first come first served. To request interpretation or captioning, contact the Accessibility Office at (202) 416-8727 (voice) or access@kennedy-center.org. Please note that requests are subject to the availability of a captioner and/or interpreter. 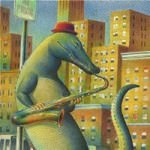 When the Primm family moves into their New York City apartment, they are quite surprised to find a crocodile in their bathtub! But Lyle is a rather extraordinary crocodile and quickly becomes part of the family. Based on the celebrated books by Bernard Waber, this snappy musical comedy features your favorite tap dancing, cooking, and life-saving neighborhood croc! Best for ages 4-12.

To purchase tickets for this performance, call the Imagination Stage box office at (301) 280-1660, or purchase them online. 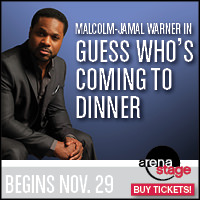 Broadway and Arena Stage favorite Kenny Leon (every tongue confess) returns to direct a new adaptation of the beloved film Guess Who’s Coming to Dinner. A progressive white couple’s proud liberal sensibilities are put to the test when their daughter, fresh from an overseas romance, brings her African-American fiancé home to meet them. Personal beliefs clash with the mores of the late 60’s in this warm and witty exploration of family and culture and knowing which of them has the greater hold on our hearts.

With his “singularly thunderous baritone” (New York Times), Tony winner and Kennedy Center favorite Brian Stokes Mitchell (Ragtime/Sweeney Todd) returns for the holidays. Look out for Santa Claus and even snow in the Concert Hall!

Pulitzer Prize-winning playwright Paula Vogel spins a musical tale of hope and forgiveness. It’s a bitterly cold Christmas Eve in 1864 and all along the Potomac, from the White House to the battlefields, friends and foes alike find their lives strangely and poetically intertwined. Weaving together carols, hymns, and folk songs, this “beautifully stitched tapestry of American lives” (The New York Times) is sure to become a new holiday classic for the entire family. 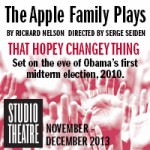 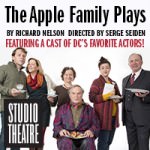 “Mr. Nelson’s series is quietly turning into one of the great accomplishments in American theater to date in this century.” —The New York Times

Studio presents the first two plays in Richard Nelson’s quartet of plays about the Apple siblings and their extended family. Set at successive meals over the course of four years, the tensions and compromises, affections and resentments of the Apple Family’s personal lives play out against a rapidly changing America. Presented in rotating repertory. 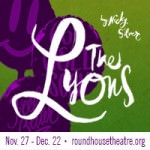 Indomitable matriarch Rita Lyons is at a major crossroads. Her husband is dying, her son is in a dubious relationship, and her daughter is barely holding it together. Tempers flare, words are exchanged, and secrets are revealed. Worst of all, Rita can’t figure out how to redesign her living room. Nicky Silver, the “strange progeny of a coupling between Neil Simon and Edward Albee” (New York Times), brings another of his deliciously dysfunctional families to the stage in this scathingly funny Broadway smash that earned Tony Award and Drama Desk nominations.

For more information or to order tickets, please call the box office at (240) 644-1100, or visit http://www.roundhousetheatre.org/performances/the-lyons/. 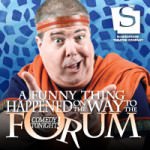 Directed by STC Associate Director Alan Paul, this hysterical Tony Award®-winning musical features a beloved score by Stephen Sondheim and an uproarious book by Burt Shevelove and Larry Gelbart. This bawdy and wild production is a gift from the gods for anyone’s holiday season.

For more information and to purchase tickets, visit https://www.shakespearetheatre.org/plays/details.aspx?id=381&source=l

Be part of Washington’s most popular free holiday event, The Kennedy Center’s Messiah Sing-Along. Back by popular demand, the evening concert on December 23 in the Concert Hall features Conductor Barry Hemphill as he leads members of the Opera House Orchestra, professional soloists, and a very enthusiastic audience in Handel’s masterpiece. A family and community tradition since 1971!

Tickets will be distributed beginning at 6 p.m. on the day of the performance (Mon., Dec. 23) in the Hall of Nations. Two (2) tickets per person in line will be distributed. Kennedy Center policies have been vetted to be non-discriminatory and to provide equal access for everyone. Please request seats in the captioned section when you reach the front of the line.

Broadway legend Maurice Hines teams up again with the unforgettable Manzari Brothers for the first time since the smash hit production of Sophisticated Ladies to tap us through his incredible 40 years in show business. With song and dance, Hines pays tribute to his brother, Gregory, and the singers who have inspired him, from Frank Sinatra to Lena Horne. To help bring the history of American tap to life, Hines brings The Diva Orchestra, an all-female nine-piece big band. Get ready to laugh, smile and tap your feet to the infectious song and dance of Maurice Hines.

Celebrating the hit movie’s 30th anniversary, this inspiring stage musical adaptation includes all your favorite songs, from “Flashdance–What a Feeling” and “Maniac” to “Gloria” and “I Love Rock and Roll,” plus 16 original songs!

One of Hollywood’s most beloved holiday hits is born again–on stage! Elf is the hilarious tale of Buddy, an orphan who leaves the North Pole to find his true identity. This modern Christmas classic will make everyone embrace their inner elf.

Subscription packages for the 2013-2014 season featuring sign-interpreted and captioned performances are available for select theater series! For more information please visit the subscriptions website or contact the Subscriptions Office at (202) 416-8500 (voice/relay).

For information about requesting captioning for a series, please contact the Accessibility Office at 202-416-8727 (voice), or access@kennedy-center.org.

Based on DuBose Heyward’s novel “Porgy” and the play of the same name, which he co-wrote with his wife Dorothy Heyward, the Broadway revival of The Gershwins’ Porgy and Bess is a stunning and stirring new staging accompanied by a lush 23-piece orchestra and includes such legendary songs as “Summertime,” “It Ain’t Necessarily So,” and “I Got Plenty of Nothing.” The classic story is set in Charleston’s fabled Catfish Row, where the beautiful Bess struggles to break free from her scandalous past, and the only one who can rescue her is the courageous Porgy. Threatened by her formidable former lover Crown, and the seductive enticements of the colorful troublemaker Sporting Life, Porgy and Bess’ relationship evolves into a deep romance that triumphs as one of theater’s most exhilarating love stories.

Celebrating the hit movie’s 30th anniversary, this inspiring stage musical adaptation includes all your favorite songs, from “Flashdance–What a Feeling” and “Maniac” to “Gloria” and “I Love Rock and Roll,” plus 16 original songs!

Based on the 1991 Academy Award-winning animated Disney feature, Beauty and the Beast JR. tells the story of a prince who is transformed into a hideous beast as punishment for his cruel and selfish ways, and an adventurous young woman named Belle whom he imprisons in his castle. In order to become human again, the Beast must earn Belle’s love before it is too late.

Tickets (and website): $18 at http://kat.ticketleap.com/beauty-beast-jr-bravo/#view=calendar  (Click on: select tickets from the Hearing Impaired section to ensure seating near the interpreters).

Curious about American art? Interested in expressing your thoughts and raising questions about a painting or sculpture? Join us for a 30-minute gallery conversation about artworks presented by specially trained volunteer ASL Gallery Guides. Voiced interpretation is provided. Meet in the F Street lobby, Smithsonian American Art Museum, 8th and F Streets, NW–two blocks from Metro Center or immediately above the Gallery Place Metro, Galleries Exit.

Special thanks to The Kennedy Center for providing this information.