If you’re dismal despite the holiday cheer and believe the only way to have holiday spirit is in a tall frosted glass than The Santaland Diaries is the show tailored to custom fit your theatre experience this holiday season. Presented by Maryland Ensemble Theatre, the show is roughly an hour-long narrative of Crumpet the Elf (Rona Mensah) and her experience in Macy’s Santaland. A highly irreverent approach to the holidays as seen through the eyes of a disgruntled holiday employee in retail at the busiest time of year, the show deviates from the usual chipper cheer of Christmas and delves into a warped hole of dark humor that will light the coals of a dark fire for some holiday merriment of a very special variety. Directed by Suzanne Beal, the show is a quirky little piece that offers an alternative to the ‘happily-ever-after’ Christmas plays and musicals that surface ubiquitously at this festive time of year, and even does so with a little laughter to be had.

Set Designer Joann Lee gets the exuberant chipper feeling of Santaland well displayed upon the stage. The whimsical painting across the down-stage proscenium arch mixes well with the brightly colored packages on the stage floor. Lighting Designer Doug Grove enhances this festive expedition with Christmas lights strung about all across the stage and even around the columns in the audience; it’s almost overwhelming, which given the nature of the show is a good thing. If you’ve never experienced the intensity with which Santaland is decorated but don’t want to haul yourself all the way up to New York City, Lee and Grove give you a polite sampling that will give you a taste without drowning you in the thick of it.

Written by satirist and humorist David Sedaris it was interesting to see Director Suzanne Beal cast a female in the role. There are no gender indications in the text that make Crumpet the Elf a man, and only those that have previously read Sedaris’ story (knowing it to be autobiographical) would miss the fact that Beal has cast a female actor rather than a male. There are actually moments, due to Mensah’s extremely animated nature where certain lines come across funnier and land more soundly as a female issuing them.

The pacing for the story at times is sluggish, pauses between anecdotes where it would feel more natural if they flowed freely. There are also moments when Mensah does a good deal of pacing back and forth without any particular intent behind it; making her seem nervous or uncertain as she tells the story. Unfortunately this detracts from some of the funnier laugh lines and some of the jokes become lost along the way. When Crumpet works through the anecdote that involves building Santa’s throne from the present boxes and blocks the story falters as she attempts to drag out the building of the seat. Beal’s approach to this snippet of the story makes the audience question why she’s taking so long to put the thing together rather than letting them focus on the story that’s being told.

Rona Mensah does have a series of fantastical moments where she really becomes engaged with both the story that she’s telling and with the audience to whom she’s telling it. One of the funniest, albeit darker, moments in the show is when Mensah delves into the diatribe about Santa and Satan having the same letters and how in her mind she has begun to replace Santa with Satan and it is now Satan-land. (This scene is made that much funnier compliments of Doug Grove’s red-wash lighting that floods the stage).

Mensah understands deadpan and satire, as well as how to deliver them. And she comprehends the misery of being an elf in the center of the ‘happiest Christmas land on earth’ at the holidays; the nuances of these devices that she coaxes into her character’s format— particularly when mocking or mimicking the more chipper and engaging elves— stirs a solid chuckling from the audience. Her vocal ability to make the various other elves and Santas sound distinctive is also worthy of commending.

All in all The Santaland Diaries presents a different perspective on the holiday, with a touching moment toward the end that reminds us that Christmas isn’t all frightening holiday retail hell; a lovely change of pace for those that are fed up with the glossy glee of this holiday season.

The Santaland Diaries plays through December 29, 2013 at The Maryland Ensemble Theatre—31 West Patrick Street in historic Frederick, MD. For tickets, call the box office at (301) 694-4744, or purchase them online. 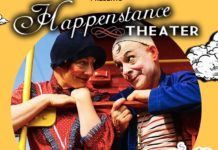