Last June, Landless Theatre Company realized they had stumbled onto something exciting with their world premiere staging of Richard Campbell’s Frankenstein, a prog-metal opera fusion of company artists and local metal musicians. No one expected that a letter to Stephen Sondheim’s agent would result in permission to develop a prog-metal version of Sweeney Todd.

“Sondheim is a genius, so this is big” said Producing Artistic Director Andrew L. Baughman. “He’s giving us an amazing opportunity to break new ground in both the theatre and music scenes.”

[Note: In the NY Times, ‘Sweeney Todd’ (Progressive Rock Remix) by Allan Kozinn on 2/12/14, Mr. Sondheim was quoted as saying, “Yes, I did indeed give them my okay,” Mr. Sondheim wrote in an email, “on condition that they don’t cut anything or change the order of things without my express permission. Since I believe that what keeps theater alive is its openness to reinterpretation from generation to generation, I look forward to seeing (and hearing) what they do.”

Mr. Sondheim added that he would attend rehearsals, but only if the company asked him.

“Nothing is more distracting to a director and cast than having the author within eyesight while they’re trying to invent and experiment,” he said. “It will be an exhilarating learning experience for me whether I like the result or not.”]

Landless is known in DC for producing camp and satirical theatre, but the company also has deep roots in rock theatre. In 2004, Landless obtained permission to develop a stage production of Diamond Dead (a screen rock musical collaboration between Night of the Living Dead’s George A. Romero and Rocky Horror’s Richard Hartley); the production went on to win 2008 Best Musical Pick of the Capital Fringe, and was a selected participant in the 2009 NY International Fringe Festival. Landless also produced a critically acclaimed DC premiere of Kyle Jarrow’s absurdist art-rock President Harding Is A Rock Star in 2008 and 2014.

“Sweeney Todd  – Prog Metal Version” will be presented in August at Mount Vernon’s Undercroft Theatre. It will feature many of the artists and musicians from the Richard Campbell’s Frankenstein team, including Resident Director Melissa Baughman.

“Sweeney is a natural fit for prog-metal,” said Melissa Baughman. “Aside from the dark story of murder and revenge, the score is operatic and intricate.”

There have been a few Sweeney Todd rock experiments in the past, such as Dee Snider’s 2012 cover of “The Ballad of Sweeney Todd” (Watch it below). Landless’ production will mark the first rock orchestration of the show. It will bring out a new dimension of the score, and highlight some of the lesser known songs, such as Judge Turpin’s “Johanna.”

“We hope to see this Prog Metal Version live on beyond our premiere production,” added Melissa Baughman. “Expect a concert staging where the music is front and center… and yes, there will be blood.”

Sweeney Todd is part of Landless Theatre’s “Summer of Rock,” including the CapFringe production of Rock Bottom [A Rock Opus], based on the novel by Michael Shilling, which will also involve popular artists of the local music scene. Landless is currently accepting resume submissions from new actors, musicians, designers and technicians for both productions. Visit our website for details. 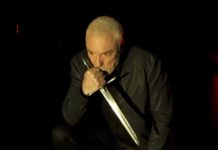