$15 general Admission at the door.

In this first LTD Exclusive performance for 2014, Don Michael Mendoza, Co-Founder and Co-Host of La-Ti-Do, presents fabulous, or rather “Fah-ba-rous,” songs and duets where he and some of his closest friends will shatter casting stereotypes.

Admission: $10 with advance RSVP, $15 General Admission at the door, $5 for non-performing LTD Alumni. Cash only at the door.

Don Michael Mendoza – Born in Washington, DC, but raised in Pittsburgh, PA, he returned to DC in 2006 to study musical theatre and broadcast journalism at American University. Today, he is extremely proud to be the Co-Founder and Executive Artistic Director of the award-winning cabaret series: La-Ti-Do (DCMTA’s Best of 2012 & 2013, DC BroadwayWorld.com Best Cabaret). He is also a local actor and can be found performing throughout the Washington Metropolitan area. Since La-Ti-Do’s beginning, many local media outlets such The Washington Blade, DC Metro Theatre Arts, We Love DC and Manila Mail featured Mendoza for his work, and in 2012 and 2013 he earned nominations for The Washington Blade’s Best Local Actor (Male) award.

LA-TI-DO is the Winner of A Special Award in 2012 and 2013 on DCMetroTheaterArts:

“La-Ti-Do has filled a void in the DC arts scene, with their weekly cabaret performances of music and spoken word. Their events not only simultaneously showcased up-and-coming and professional artists, but they fostered the community of artists in the DC/MD/VA area.” 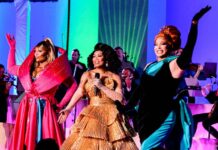