“Hear it like a whisper, smell it on the summer breeze.” It’s the sound of story and whimsy—the smell of childhood and daydreams. These sensations are brought to life in Seussical the Musical, (with music by Stephen Flaherty and lyrics by Lynn Ahrens), playing at Montgomery College Summer Dinner Theatre. Seussical combines the plots from several Dr. Seuss books, mainly Horton Hears a Who and Horton Hatches the Egg, but there are also references to How the Grinch Stole Christmas, The Butter Battle Book and others. These stories are loosely woven together to tell the tale of Horton the Elephant, the microscopic town of Whoville and the inhabitants of the Jungle of Nool. These stories are narrated by another familiar Seuss character: The Cat in the Hat. In a continuing trend, many musical creators cobble together songs or stories by the same artist and label it a new musical. Seussical reminds us of childhood stories, but it content to retell them without adding new ideas.

With so many disparate stories comprising the plot, Director Matt Bassett and Music Director John Henderson rely on music and staging to convey the story. Nearly all the songs contribute to the story development, thus making it slightly easier to overlook the occasional forced writing necessary for transitions between songs. Scenic Designer Elizabeth Jenkins McFadden has created a colorful multi-level set reminiscent of playground equipment. The set is a bright and playful shade of lime green, complete with blue, yellow and purple accents—and a slide. Best of all, the accent colors glow under certain lighting. Lighting Designer Lynn Joslin only uses this effect once, but it is a terrific moment of design collaboration.

As Seussical opens, we see the Boy (Aurora Beckett) climbing up the set and sliding down the slide multiple times. Finally, the announcer tells us that the performance is about to begin. This pre-show scene is a bit lengthy and unnecessary. Finally, the Boy spies the familiar red and white striped Seuss hat and muses about what could be under the hat. Enter The Cat in the Hat (Tendo Nsubuga) who ushers in the entire cast singing “Oh, the Thinks You Can Think” and encouraging Jojo to experience the joys of imagination. The Cat then introduces the Boy to Horton the Elephant (Jason Guerrero), and the tale of Horton and the Whos begins to unfold. As Horton meets the Whos, the Cat brings the Boy into the story to play Jojo, son of the Mayor of Whoville. As the story progresses, Jojo faces trouble in Whoville for thinking too much, and the jungle animal mock Horton for believing that the invisible Whos exist. Horton’s persistence and dedication catch the eye of his shy neighbor Gertrude McFuzz, but Horton has no time for Gertrude (Lyndsay Rini). He is too busy egg-sitting for the flighty Mayzie La Bird (Mayilla Jones). Ultimately, all the characters gather for Horton’s trial and a foreseeable but satisfying conclusion.

For a fun and child-friendly musical, Seussical boasts several surprisingly sorrowful and touching numbers. As Jojo’s parents try to cope with his vivid imagination, Beckett sings “It’s Possible.” The entire scene is beautifully staged. Beckett sits in a large tub, and several of the other performers move it around stage as she sings about her imagination turning the tub into the magical world of McElligot’s Pool. Beckett sings beautifully, and her storytelling by song infuses life into the unfolding scene. Guerrero and Beckett share an endearing and sweet duet “Alone in the Universe,” each telling the story of their respective isolation. As Gertrude pines for Horton, Rini delivers two songs of unrequited love: “The One Feather Tail of Miss Gertrude McFuzz” and “Notice Me, Horton.”

Seussical is undoubtedly an ensemble show, but several quality performances breathed life into the production. Liam Allen as the lead Wickersham Brother delivers a physical and fun performance which includes soaring leaps, gymnastics feats and singing while hanging upside down from a rope swing. Allen’s physicality and on-stage energy are the highlight of the entire show. Rini’s adorable and awkward portrayal of Gertrude is the strongest acting in the show. She finds both vocal and physical comic moments in the plain and shy Gertrude. Beckett is an excellent singer, and all of Jojo’s songs were captivating and intriguing. For one shining moment, we believe that she will transport us all to the distant paradise of “Solla Sollew.”

The ensemble sings and moves well, but there are several times where the audience cannot hear a solo line. This may be sound levels, projection or a combination of the two. While the singing is strong, Director Bassett could have worked more with the actors on portraying the through line of the story. Most performers seem far more committed to the songs than they are to the dialogue, and there are moments of both under-acting and over-acting. More commitment to the characters and the story arc would draw the audience deeper into theses characters and their struggles.

The task of harnessing and directing all the onstage energy, scene changes and storytelling falls to Choreographer Rachel Leigh Dolan. There is one scene of breathtaking beauty, the dancing in “It’s Possible.” The ensemble races across the stage with flowing blue scarves, and they twirl ribbons on sticks to complete Jojo’s dream sequences. Yet there are also times when the spacing and staging completely undercut the performers and their movement. For the majority of the opening number “Oh, the Thinks You Can Think,” the entire cast is clumped together onstage. This formation blocks many of the actors and fails to utilize the convenient levels of the set. Dolan corrects this staging at the end of the number. During one scene, Horton is sold to the circus (“The Circus McGurkus”). Dolan uses a rope swing for an athletic trapeze sequence, and one performer twirls a baton for several minutes. The rest of the circus members’ movement are a bit flat by comparison. Additional use of the athletic performers and strong dancers would improve the ensemble songs and dances.

Adding to the show’s spectacle and Seuss-ified feel are Costumer Designer Peter Zakutansky’s vibrant costumes. Mayzie La Bird and her Bird Girl entourage are clothed in feathered costumes appropriate for a parade float at the Brazilian Carnival. The Whos all appear in shades of green and yellow, making them easily distinguishable from the jungle animals. The costumes are suitable fun and whacky, but the accessories might need to be pared down or pinned better for future performances. Several performers lost hats and wigs in the middle of their dances. They compensated well, but these small distractions pull focus from the performance. I imagine this will be rectified for future shows.

The doors open at 6:30 for the dinner portion of the show/ Prior to the show, there are several minutes of announcements about the history of Montgomery College’s Summer Dinner Theatre program. As this is a dinner theatre, prepare for a lengthy intermission. The performers are also the waitstaff, and they will stop by your tables to refill your glasses.

In memory, there is indescribable magic. Seussical brings cherished tales of the past to the stage. Hear the whisper of Dr. Seuss’s words rising from the page and coming to life in dynamic colors. If you concentrate hard enough, you may just smell the pages of that well-loved copy of your favorite Seuss book. 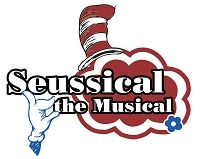