It’s that time of year when The Capital Fringe Festival rolls into town. Everyone has a show, there are over 100 every year. An exciting new preview-interview of goodies to come is right here for your reading convenience; this particular article features a brand new company called “1Up Theatre” and the dark comedy mashup show, Saving Private Poo. I sat down with Landless Theatre Company’s Associate Artistic Director and Saving Private Poo co-creator/director Steve Custer to talk about the show they are presenting at Fringe this 2014 summer season.

Amanda Gunther: Steve, thank you for sitting down with me, tell me a little bit about the show you’re getting ready to put on at The Capital Fringe.

Steve Custer: I am putting up Saving Private Poo, which I have co-written with Ian Hoch. We worked on this show together for Landless Theatre Company’s Third Annual Mash-up festival, which premiered after their production of Frankenstein. The show itself is a hybrid of ideas between Winnie The Pooh and Saving Private Ryan pitting the likeness of the loveable 100 Acre Wood characters and splashing them right into the center of World War II.

You’re mounting this show outside of Landless now, as a part of a new theatre company?

Yes, it’s a little side project company serving as a writing avenue for Ian and I.  The theatre company is called “1Up Theatre” just like Super Mario Bros. Or like the traditions of ancient Greece, if you come see one of our shows, you’ll be taking on an extra life. So… (In the voice of Mario) Here we go!

You mentioned this was originally a project that you’ve done before, but that it has changed, can you tell us a little bit about how it’s changed?

The initial mash-up guideline for Landless was that it had to be performed in 35 minutes. This is now extended to 50 minutes. There were ten chapters before, beginning each scene in the style of a narrator reading out the chapter title. The narrator would say “Chapter One: In which we are introduced to Winnie the Poo and some Nazis, and our story begins.” So we still have that but each of the chapters have been extended to be a bit longer. There’s new dialogue that has been incorporated and inspired by Band of Brothers, The Thin Red Line, and of course the overarching plot line that we’re following is still from Saving Private Ryan.

We’ve added some additional World War II— how do I phrase this? We’re using references from popular World War II media that people will recognize and understand when they see it. I would say if you want to know exactly what I’m talking about, you probably need to come see the show. But I will say that there is some more inclusion and inspiration from Inglorious Bastards.

Has the cast differed at all from when you mounted the production a year ago?

Oh yes, we do have some new people on board but have retained most of the original cast. Same Poo, Piglet, Owl, and Kangaroo 2. Ian will be reprising his role of the Tiger and I’ll be playing a Nazi.

Christopher Robin— sorry, Captain Christopher Robinson is now being played by Matt Baughman. To be perfectly honest the part was initially written for him. I had wanted him to play that role the first time around, but he had to bow out due to scheduling conflicts. Russell Silber (who originated Robinson) has been shifted to another role, as well as Adam Adkins who will now be donning the tail of Donkey. And finally, we have some newcomers — LTC performing alum and MET company member Devin Gaither will be playing Rabbit, and Ashley Hall has joined the cast as Kangaroo 1. It will be a nice mix of old and new.

When people think of Fringe shows they tend to have a certain connotation that go along with it. What was it that made you decide you wanted to mount this show at Capital Fringe, and how does it fit into what Fringe markets as their artistic motto?

Well, I wanted to showcase the show a little more. Ian and I together, as the writers, thought its best chance was being co-produced at Fringe. There are other mash-ups we’ve considered doing, whether they were for the LTC mash-up festival or somewhere like Fringe, this was the one we thought would do the best at this festival.

This is my first experience producing a show at Fringe. I’ve acted in Fringe shows before but I’ve never put up a show on my own before. Ian is my financial partner in all of this but I’ve been doing all the paperwork, writing the press release, making images, etc. Devin Gaither is a designer as well so she’s been helping out with the images. This has been a whole new experience for me but what I’ve noticed is that the name draw of a show has everything to do with Fringe. Saving Private Poo is catchy enough. I think people are going to see the name, say “what is that? Is that what I think it is? Oh, yes it is.” And that will be enough to draw them in. We had to write a 10-word marketing tag. And I came up with “The mission is a man saving a bear. Oh, bother.” It was clever enough in the ten words to tell you what it’s about and give you some nostalgic flavor. 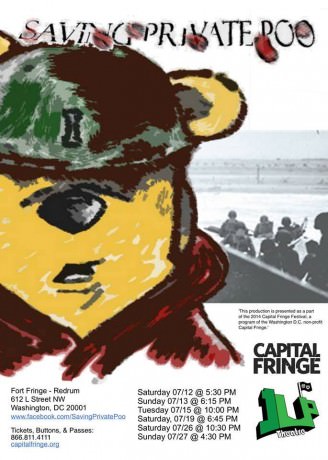 Where is your venue, and when do you open?

Redrum! I love Redrum! And it has air-conditioning! For having 11 actors including myself on stage it’s a nice sized space. It’s not too big but it doesn’t feel cramped. We open on the first Saturday of Fringe— Saturday July 12th at 5:30 pm. We have six shows total. We play every Saturday, two Sunday shows, and one random Tuesday in there as well. So it’s double what we had for the mash-up festival, it’s not 10 pm at night in the middle of Columbia Heights, and it’s in a properly air-conditioned venue.

That first Saturday is a huge deal at Fringe. I’m very excited that we have it. It’s a coveted slot to have heading into the early evening on that first Saturday. Come see Honey Company! That’s what I’m calling the cast. We’re in the perfect time slot. It’s 80 seats, so get your tickets early! We’re going to fill it!

What’s the draw other than the name and your very clever marketing tag?

We have comedy and drama. We have parody and seriousness. You’ll feel the gravity around mid-show when a major plot twist occurs— again, if you want to know what happens, you have to come see it— but  we still manage to keep a flowery language of youth and nostalgia amid the drama that will keep you reminiscing long after Fringe. We hit a major shift in tonality going from light-hearted parody to something super serious super quick, and I think we handle it really well. For a mash-up of ideas that features a spotlight on dark comedy, we make it work, which I feel fits nicely with Fringe. The festival speaks to all manners of comedies and dramas and everything in-between.

Where can we keep up with what’s happening with this show?

We have a Twitter handle as well! @SavingPrivatePoo and we have a hashtag— #SavePoo

So we’re using a lot of social media to really spread the word. Within a week’s time we had close to 200 likes on the Facebook page. And I’d love to up the ante on that as we move forward. That’s not at all a shameless plug to go and like our Facebook page. Not at all.

There are 134 different shows at Fringe why should people pick Saving Private Poo out of those 134?

Aside from the fact that we have air conditioning in July, for the 50 minutes that we run, Saving Private Poo gives you a very well-rounded show. You get your dose of comedy, you get your dose of drama, you get some stage combat, you get some moments where you’re really feeling nostalgic and that will start tugging at your heartstrings. The show really does cover a lot of bases and I feel like you walk away from it entertained, but also wondering what you just saw, specifically questioning Captain Christopher Robinson. How old is this kid now that he’s having this kind of adventure with his stuffed animals?

In a way, this is my version of Dog Sees God meets 100-acre wood gang, AKA “Honey Company.” That’s kind of what I want to impart on people. It’s something familiar to them already, but it’s going to be different and fun to think about. 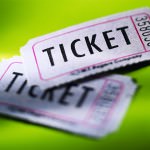 Get your tickets for Saving Private Poo early!