When a playwright calls his play Good People, we can assume that the characters will be…you know…good people. Can’t we?

In David Lindsay-Abaire’s Good People, opening this Friday at Silver Spring Stage, it’s not a clear or straightforward thing. Director Michael Kharfen says Lindsay-Abaire “makes us ponder the choices we make, and what defines us as Good People.” But, he adds, “One definition of a good person is someone who is good to other people. There are many manifestations of it in this play.”

Good People, which runs weekends through July 20th, centers on the story of Margaret Walsh (played by Roxanne Fournier Stone), a worn-out but still spirited South Boston woman who, in the opening scene, loses her low-paying dollar store job. Margaret – friends call her Margie, with a hard “g” – has been chronically late to work. It’s not her fault, she insists to her young boss, Stevie (David Dieudonne), whom she’s known since he was a kid. She has an adult daughter with disabilities (the unseen character of Joyce). Life happens, she can’t help it. But the job is gone.

Margie’s straits could happen anywhere; Kharfen says the universality is part of what drew him to Good People. But what clicked first for him is that the play also distinctly depicts Boston – Kharfen’s hometown. “I was familiar with the personalities of the characters, Boston pride and fierce neighborhood pride, many of the references in the script, and the way the American dream myth is depicted in the Boston setting,” he says. Plus, he notes, Good People has many moments that are flat-out hilarious.

Margie’s job loss is the play’s catalyst. After discussing her problem with close friend Jean (Marianne Meyers) and landlady/sort-of-friend Dottie (Declan Cashman), she visits the office of her long-ago summer boyfriend Mike (Kevin Dykstra) in search of a job. Mike left South Boston – “Southie” – decades earlier and never looked back. He’s a successful physician. He lives in a tony suburb with his little daughter and his wife, Kate (Tanya Baskin), who’s considerably younger than he is, comes from a privileged background, and happens to be African American.

Mike has no job to offer, but Margie winds up with a half-hearted invitation to a party at his house. He later calls to tell her the party’s been cancelled because his daughter’s sick, but Margie thinks he’s just putting her off. She goes to his house, armed with a suggestion from Jean (no spoiler here!) that might make Mike more inclined to help her out. But the daughter is sick; there is no party. What happens instead is an intense Act 2 scene between Margie, Mike, and Kate that goes right to the heart of who people are, how they’re able – or not – to change their circumstances, what they can never really leave behind…and what actually happened way back when.

“The greatest challenge of this role is to keep the audience rooting for Margie, even in her ugliest moments,” says Stone. “I want everyone to see that she is a good person, multi-dimensional, never entirely scratching with desperation or sighing in complacency.” For his part, Dykstra says he has worked hard to portray Mike’s “slow loss of control as he struggles to maintain the image of himself he has created while being faced with the past he has worked to leave behind.”

Much of the beauty and impact of Good People comes from the vividness of its characters – leads and supporting roles alike. As Dykstra explains, the Southie characters “are colorful, hard-working, profane, stubborn, funny, boisterous, and occasionally desperate, while at the same time being caring and supportive and interwoven into a community. And the character of Kate gives insight to the world into which Mike has moved.” Says Stone, “each character wields a power in Margie’s life, both good and bad, and each exerts an influence that drives the story.”

As for how the story unfolds and what really did happen years ago…well, Kharfen says, to some extent “the audience will have to decide for itself what is true and what is in the mind of the character. I think this will keep audiences engaged.”

With a cast of just six, Good People is perfectly suited for Silver Spring Stage’s intimate space, says Kharfen. And as a play that “deals with contemporary issues in a compelling way” while also being laced with “a wonderful, edgy sense of humor,” it’s a great fit for the Stage’s mission, he adds.

“To me what is marvelous about Good People is that is not predictable,” says Kharfen. “The characters are written and portrayed so well that even after seeing rehearsal after rehearsal, I continually am impressed by the spontaneity and realness of this play.”

Silver Spring Stage’s production of Good People plays the weekends of June 27-July 20, 2014. Performance are on Fridays and Saturdays at 8 p.m., plus Sunday matinees at 2 p.m. on July 6, 13, and 20th. Regular ticket price is $20, but $10 tickets are available for select performances on Goldstar. There  is also a Pay-What-You-Can preview on Thursday, June 26, at 8 p.m. The Stage is located in the Woodmoor Shopping Center – 10145 Colesville Road., in Silver Spring, MD 20901. The opening night performance will be followed by a reception to which all audience members are invited.

Note, however, there is no performance on Friday, July 4th. 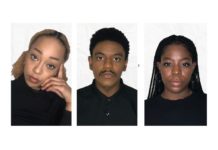