In Part 1 of a series of interviews with the cast of Breast in Show, meet Gracie Jones.

Joel: How did you get involved in the show?

Gracie: I got involved in this production when Kate emailed me and asked if I would be interested in the role! I was very flattered and was happy to join the project.

Why did you want to get involved in the show?

I was excited to work with Kate, and I have known and been close to many cancer patients and list a few close family members. I feel this is a fantastic show with a positive message and a wonderful way to spread awareness.

How do you relate to the characters you are playing?

Well my character, Chelsea, is a single mother of two and is only twenty nine years old. I can relate to her on several levels where childrearing is concerned, and the idea of having to leave the babies you love much too soon. My other character, Donna, is the wife of cancer patient, Tim. I find it easiest to relate to her when it comes to being the rock for someone who is battling thus disease.

Why is this show so important to you? And why should local theatres come and see and support the show?

As I said, I feel this show is an incredible voice for those who are battling breast cancer. It gives a realistic yet hopeful look at what it is like from the patients’ perspectives. It is an important piece of work to support due to the power it has to spread awareness. In addition, I think that artistically, it well worth taking the opportunity to witness!

What is the most moving scene for you in the show?

I find the anthem “Time” to be the most moving song/scene in the show. It is something every person who has ever faced cancer, or has lost a loved one at all, can relate to.

What are your songs in the show and what do we learn about your character when you are singing the songs?

My solo for Chelsea is called “Desiree” and it is her tribute to a nurse who has taken care of her through two years of cancer treatment. It brings to the surface all joy and fear and gratitude one feels when faced with the possibility of not surviving this disease. The song I sing as Donna is called “Normal.” It addresses the longing all family members feel for the “before” they can barely remember after diagnosis and treatment has begun.

What do you want theatregoers to take with them after seeing Breast in Show?

I would love for theatre goers to leave the show with a view on cancer that is more expansive than it was before. I think we forget at times that breast cancer is more than the pink ribbon. It is an experience that encompasses every human emotion we are capable of feeling. This show does a good job of bringing some of the most prominant facets of this disease to light, as well as helping the audience embrace these emotions with humor, which only solidifies their appreciation for every individual who faces this challenge, in whatever capacity that may be. 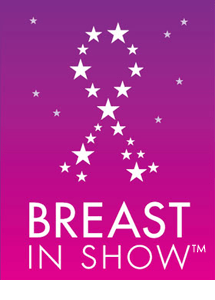