Sur is ultra-modern with edgy moves. The dancers use not only their arms to pull themselves together in pairs in this sizzling piece set to the music of Astor Piazzolla, but they stick their feet through the crook of their partners’ knees and whip themselves around in tight, precise turns.

Francesca Dugarte of the Washington Ballet executed delightful kicks at above-shoulder height that were like a finger snap but without the sound. Along with those of Luz San Miguel of the Milwaukee Ballet, they left me wanting more of these beautiful signature flourishes.

The world premiere is also Amarante’s first work for an American company and features his native Argentina’s most famous dance, the tango. The dancers wear flippy skirts and mesh tops (by Monica H. Leland, supervisor of Washington Ballet’s wardrobe) that give a spontaneous street vibe that matches some of the in-your-face moves appropriate to the barely-sheathed anger and passion that the tango uniquely expresses.

The other world premiere is Chamber Dance Project Artistic Director Diane Coburn Bruning’s Time Has Come, a tribute her late New York ballet teacher David Howard. It is set to the music of Alessandro Scarlatti (from Sonata No. 4 in D minor), Wolfgang Amadeus Mozart (Adagio from String Quartet No. 1 in G major, K.80)  and Georg Philipp Telemann (Adagio from String Quartet No. 1 in G major, K.80 (from the Paris Quartets). In one part, the dancers fling themselves repeatedly at their partners, who catch them in midair in a series of quick poses that would have been lethal had ice skates been involved.There are light-hearted, happy arm movements and playful hip juts as well as lovely partner swings that sweep the floor with athletic-inspired dresses by Holly Hynes.

Another highlight of the performance is Bruning’s Exit Wounds: and then they come home, a moving depiction of the toll of war. It shows a man ravaged by injury—his own and others’—with his fellow soldier helping him survive. Set to the music of Philip Glass, it presents a nuanced depiction of war and its aftermath. Shock, pain and caring are clearly depicted.

Like the other dances, it is performed in contemporary ballet style, so rather than using traditional  holding points such as the hand and waist of classical ballet, dancers Fernando Duarte of the Joffrey Ballet and Luis R. Torres of Washington Ballet  use modern ergonomic holds to express themselves with control and athleticism. It is as if the statute Iwo Jima broke loose and began to dance. It was first performed in Baltimore in March.

The opening dance is Bruning’s popular Berceuse, literally a lullaby set to a Baroque score by Benjamin Godard. It features San Miguel and Armenian-born and trained Davit Hovhannisyan. His chiseled body was beautifully accentuated by the lighting of Maja E. White, who has worked with Bolshoi and the Kirov ballets.

Bruning has said that one of her aims is to demystify modern ballet, and the average person can easily interpret the symbolism of many of her movements. She also likes to perform in small spaces so everyone can see clearly, and the Terrace Theater with its 450 stadium-style seats suits the bill. Sit in the center or right of the theater.

The show opens with a musical number, Don’t Tread on Me or my String Quartet by Russell Peck, and this frenetic piece with its American hoe-down sound lets you know you are in for a unique performance. The quartet features Claudia Chudacoff and Chaerim Smith on violin, Derek Smith on viola, and Lori Barnet on cello. Chudacoff is concert master for the U.S. Marine Band’s White House Chamber Orchestra and performed a riveting solo between dances. Chaerim Smith is co-founder of the New Orchestra of Washington. Derek Smith performs regularly with the National Philharmonic Orchestra and Washington National Opera Orchestra. Barnet is principal cellist of the National Philharmonic Orchestra and Wolf Trap Opera Orchestra.

Lauren Archer of the Richmond Ballet substitutes for injured Kara Zimmerman of the Joffrey Ballet in Sur.

The Chamber Dance Project is a repertory company of contemporary ballet dancers and musicians founded in New York in 2001 by the award-winning Bruning, who has choreographed for 15 companies and worked with the Washington National Opera, Julliard Dance Ensemble and Ballet Chicago. She moved the Chamber Dance Project to D.C. from New York in the spring and quickly found a supportive board. When they saw Exit Wounds,  some members decided to donate tickets to Operation Homefront, which provides relief for soldiers’ families in need. They rehearse in residence at BalletNova in Falls Church, Virginia. 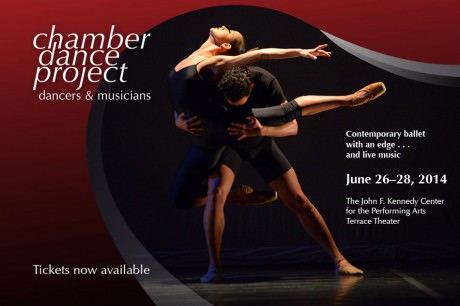 Chamber Dance Project’s debut performance is a good chance to join in on a highly accessible journey of artistic achievement at its prime.