“It’s all about risk,” explained Judd over a cup of coffee in his tiny but charming pied-a-terre in Manhattan. “I am addicted to taking certain kinds of risks. Usually this plays out with my fascination with touching sharks or trekking the Arctic in search of polar bears. I’ve never been able to afford therapy and I don’t write shows that are therapy, either, so I don’t know the reason. But I can tell you that Killer Quack is the riskiest, scariest thing I’ve ever done as a performer.” Killer Quack is an expanded version of a 20-minute story Judd told at the Capital Fringe last year as part of a collection of stories called Funny Stories 2. 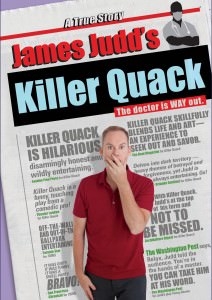 “The whole reason for doing Funny Stories 2 was to test out the short version of Killer Quack. I needed to know if the audiences were interested in hearing this story and whether they would accept me telling it with humor.” The play chronicles Judd’s involvement and infatuation with a handsome dermatologist who turned out to be a fake doctor, a murderer, and now an inmate at Attica Correctional Facility. Judd has corresponded and visited with him over the course of several years now. “Although told with humor, the play is about heartbreak, rejection, forgiveness and redemption.”

But Judd is a renowned comic and physical actor who has been knocking over fringe audiences for more than a decade with his laugh-packed shows like 7SINS, Fat Camp, Funny Stories, and Funny Stories 2. Even in the darkest moments Judd will find humor.

“I do want the audience to laugh,” he explains, passing up the sugar bowl for a packet of Truvia as he diets down for his semi-nude scenes in Killer Quack, “but I want them to come into the Geothe Institut expecting to find humor in a drama as opposed to expecting a comedy that turns dark.”

It isn’t just a semi-chiseled physique Judd is displaying in Killer Quack – the name comes from the litany of headlines about the infamous fake doctor that graced the covers of the New York Post in 2003 and 2004 – it’s also his most deeply personal work to date.

“I’ve never worked so hard on anything in my entire life. It’s emotionally grueling work,” says Judd, who is the Artist in Residence with the All For One Festival in New York City, which will produce Killer Quack Off-Broadway in April 2015, is aware that the road ahead is challenging. “But Killer Quack is the opportunity to shine that I’ve been working toward for years.”

He premiered this longer version of the play at the Orlando Fringe, where the Orlando Sentinel said, “Killer Quack delves into dark territory – heavy themes of betrayal and forgiveness, yet Judd is always entertaining.  Go!”

“After Orlando, I felt that I needed to rework the ending and several other smaller sections in the one week I had before heading to the London, Ontario Fringe.” The London Free Press critic wrote, “Killer Quack is hilarious, disarmingly honest, and wildly entertaining.”

“Now with all this work behind me I’m ready to show it at the Capital Fringe. It’s a big test.  I believe I’m ready.” 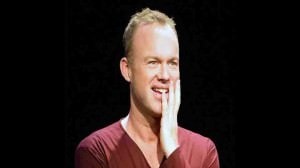