Funny, twisted, suspenseful, funny again, and then suddenly mind-blowing, Ligature Marks is a play unlike any other you’ll see at this year’s Fringe. A comedy about a pair of losers that gradually morphs into an edge-of-your-seat crime drama, Ligature Marks borrows equally from the traditions of dysfunctional relationship comedies, noir thrillers, and virtual reality mind-benders.

Jill can’t live without Terry.  So it’s up to both of them – and Terry’s favorite online multiplayer game NOIR – to make sure she never has to.  This dark comedy from critically-acclaimed, award-winning playwright Mac Rogers charts a twisted romance between two of life’s losers as they take one final shot to be something other than what they are. 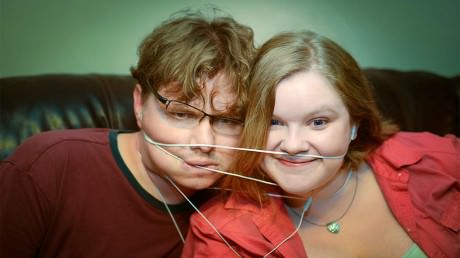 A critical hit at no fewer than three theater festivals so far (check LigatureMarks.com for raves from New York, Los Angeles, and Cincinnati), Ligature Marks starts off exploring Jill and Terry’s stunningly co-dependent relationship. But just as the audience settles in for what seems like a darkly humorous character study, the story takes a remarkable turn.

As Rogers explains, “I wrote most Ligature Marks in a jet-lagged haze while traveling in Costa Rica – in sharp contrast to the seedy small-town Colorado setting of the play itself! But that let me tap into a more subconscious level of storytelling than I usually deal with. It helped me envision a story of two of life’s marginalized people trying to make their lives mean more by forcing them into the kinds of high-stakes stories you see play out in multiplayer online gaming and film noir.”

Rogers’ plays – which tend toward genre forms like science fiction, horror, and crime thrillers – have earned two Critic’s Picks from The New York Times, two Critic’s Picks from Backstage, two New York Theater Blogger Awards, and seven nominations from the New York Innovative Theater Awards. Over the course of its tour, Ligature Marks has earned a Critic’s Pick from Cincinnati’s CityBeat (which called it “the perfect Fringe show”) and no fewer than ten rave reviews from three different cities. Gideon Productions is proud to bring it to Capital Fringe 2014.