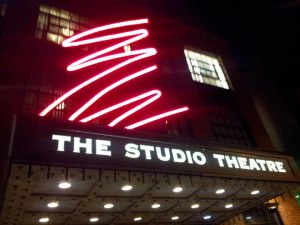 Artistic Director David Muse is pleased to announce the fifth show in Studio Theatre’s 2014-2015 season subscription series will be British playwright Tom Wells’ hilarious and heartbreaking comedy Jumpers for Goalposts, directed by Matt Torney. This production marks both the play and Wells’ US debuts. “I was surprised to learn that Tom, whose work has been so celebrated abroad, had yet to be produced in the United States;  he writes with tremendous heart and humor, with a grounded naturalism and lack of sentimentality,” says Muse. “It’s a great honor to introduce this playwright and his remarkable play to DC and the country.”

ABOUT JUMPERS FOR GOALPOSTS

Hope springs eternal in the post-game locker room of Barely Athletic, an amateur soccer team competing in the five-a-side pub league in Hull, a Yorkshire fishing city that’s seen better days (as have these athletes). A hilarious and heartbreaking play about romance, resilience, taking chances, and moving on by the winner of Britain’s 2012 George Devine Award for Most Promising Playwright.

Jumpers for Goalposts premiered in a co-production by Paines Plough, Hull Truck, and Watford Palace Theatre at Watford Palace Theatre in London in April 2013. The London Evening Standard lauded the play as “generous, warm-hearted and packed with telling, often very funny detail,”  and the Telegraph praised Wells, noting, “What makes Wells so special is his gift of making the small change of everyday lives shine so brightly.”

Tom Wells is from Kilnsea, East Yorkshire. He is currently Associate Playwright at the Bush Theatre in London. His plays include: Jonesy(Nabakov, 2012); The Kitchen Sink (Bush Theatre, 2011, winner of the Most Promising Playwright – Critics Circle, 2011 and the 2012 George

Abby and Zack traded the comforts of America for noble adventure abroad, moving to the trendy Parisian enclave Belleville for his prestigious post with Doctors Without Borders. Their lives seem perfect. But when Abby returns home early one afternoon, she uncovers a few seemingly inconsequential surprises. Chillingly precise and psychologically astute, Amy Herzog (4000 Miles) anatomizes the consequences of deceptions small and large and the terrifying, profound unknowability of our closest relationships.

The night after their grandfather’s funeral, three cousins engage in a verbal battle royale over a family heirloom. In one corner is self-proclaimed “Superjew” Daphna: volatile, self-assured, unbending. In the other, Liam: secular, entitled, and just as stubborn. And in the middle, Liam’s brother Jonah tries to stay out of the fray and honor his grandfather’s memory on his own. A savage comedy about family, faith, and identity politics.

For 50 years, the elite boarding school Charles R. Drew Prep has stood by its traditions and prepared young black men to lead. But times and finances have changed, and the pressure on Drew’s legendary gospel choir is high. So when Pharus, an ambitious and talented student, is told to ignore a gay slur to take his place as the choir’s leader, he has to decide who he is and what he’s willing to fight for. A music-filled story of masculinity, tradition, coming of age, and speaking your truth from the writer of The Brother/Sister Trilogy.

The West. The 1920s. Mabel’s had a hard few weeks: A dynamite accident at a gold mine has left her wealthy but orphaned, and she’s shipped off to a calculating aunt whose nephew is charged with seducing her to control Mabel’s fortune. This hapless courtship reveals a shared love of silent movies and a plan for greater things. A story of mishaps and moxie, the romance of Hollywood and ultimately a Hollywood-caliber romance. A world-premiere slapstick comedy from the Pulitzer Prize-winning playwright of Crimes of the Heart.

______
Jumpers for Goalposts
by Tom Wells
directed by Matt Torney
US Premiere
begins May 13, 2015

Hope springs eternal in the post-game locker room of Barely Athletic, an amateur soccer team competing in the five-a-side pub league in Hull, a Yorkshire fishing city that’s seen better days (as have these athletes). A hilarious and heartbreaking play about romance, resilience, taking chances, and moving on by the winner of Britain’s 2012 George Devine Award for Most Promising Playwright.
______
Studio Lab
The Wolfe Twins
by Rachel Bonds
directed by Mike Donahue
World Premiere
begins October 15, 2014

Lewis invites his estranged sister Dana on a trip to Rome to reconnect.  But when he befriends a beautiful stranger, old wounds fester and intimate secrets are revealed.  A dark, contemplative world premiere from Studio Theatre commissioned playwright Rachel Bonds.

Sara’s life is perfect—Upper West Side husband, daughter, and life. But her irresistible past blows back into her life in the form of an old flame, a dangerous passion, and a love triangle headed for ignition. Staged cabaret-style in Stage 4, this sexy twist on an old form puts the audience in the middle of its action. An explosive rock musical from Jonathan Larson Grantee Julia Jordan and indie rock singer/songwriter Juliana Nash (Talking to Animals).

A is a teacher attempting to rescue her former pupil from a dangerous back-street abortion. B is a young woman who falls from a construction crane and in love with a demon made of worms. C is a homicidal sociopath who sells his soul to the Devil for an angelic voice heard only by his victims. This supernatural vision from Irish playwright Mark O’Rowe (Crestfall) takes its audience on a dizzying plunge through its characters’ quietest fears and most intimate desires.

Grace is 27, married to her high-school sweetheart, makes good money, and should be way happier than she is. But her husband lost his job and now all he does is play Xbox and smoke pot and Mary-Kate and Ashley Olsen might be her best friends but maybe they only like her because she’s their new target demographic. Or maybe…they’re actually going to save her. A funny play about sad people. 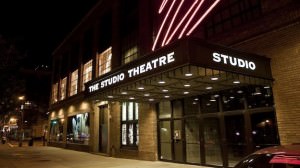 Entering its fifth season under the leadership of Artistic Director David Muse, Studio Theatre is Washington’s premiere venue for contemporary theatre, “where local audiences will find today’s edgiest playwrights” (Variety). Muse is joined by Keith Alan Baker, Managing Director/Artistic Director, 2ndStage; Serge Seiden, Producing Director; and Meridith Burkus, Director of Strategic Initiatives.  One of the most respected midsized theatres in the country, Studio Theatre produces the work of today’s greatest writers, augmented by occasional productions of modern classics, performed by acclaimed actors in intimate spaces. Throughout the Theatre’s 36-year history, the quality of its work has been recognized by sustained community support as well as with 312 nominations and 61 Helen Hayes Awards for excellence in professional theatre.

Accessibility:  All performances are fully accessible to accommodate patrons with special needs. FM assistive listening system available, along with induction loops that work with a patron’s own hearing aids. Accessible seats available by reservation. Call the box office at 202.332.3300 or V/TTY 202.667.8436.

*This is a press release from Liz O’Meara-Goldberg, Publicist of The Studio Theatre.