Prince William Little Theatre’s production of The Musical of Musicals (The Musical!) opens on July 18th at the Gregory Family Theater in the Hylton Performing Arts Center in Manassas, VA! Joanne Bogart and Eric Rockwell wrote the musical that opened off-Broadway in 2003 at the York Theatre and again in 2005 at the Dodger Stages (Now New World Stages). The musical played on London’s West End utilizing the same cast from March 31, 2006 through April 22, 2006 at the Sound Theatre. 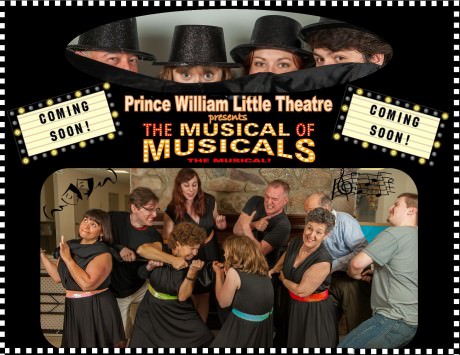 The girl cannot pay her rent, the classic melodrama plot, is presented as five self-contained “mini-musicals.” Bogart and Rockwell wrote original material for the show, capturing the style and dramatic flair of Rodgers and Hammerstein, Stephen Sondheim, Jerry Herman, Andrew Lloyd Webber, and Kander and Ebb.

A few of the actors from this production have been kind enough to share a little more information about themselves and the show. 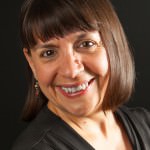 Chrissy was most recently seen on the stage with Prince William Little Theatre as an Ensemble member for their production of Baby, and featured as Angie in PWLT’s production of The Wedding Singer. When asked about why she auditioned for this show, she expressed how she was drawn to the humor of the parodies of The Musical of Musicals (The Musical!). She values the opportunity to participate in some of her favorite musicals(Chicago, Cabaret, Mame, Hello Dolly, and Oklahoma!) all in one hilarious show! Playing all different types of characters is tons of fun and a unique challenge. Chrissy really enjoys the general creative atmosphere, and the talent that each fellow actor displays as they delve into their individual characters for each different scene. 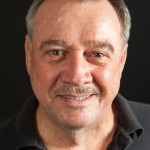 Larry most recently appeared in Prince William Little Theatre’s production Of Mice and Men as Slim. A couple more of his recent local favorites are White Christmas as Bob Wallace with Fauquier Community Theatre, and portraying Scrooge in Elden Street Players’ production of A Christmas Chaos. After working with director Susy Moorstein on previous PWLT productions, Larry jumped at the opportunity to work with her again on this production of The Musical of Musicals (The Musical!). Larry is super excited to play the villain! It is exciting to portray Jitter differently in each segment, but Larry says he’s totally up to the challenge! Larry is eager for the audience to experience the awesome talent of this show and his fellow cast mates. 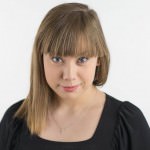 This is Katie’s first production with Prince William Little Theatre. After seeing the original cast in the off-Broadway production, Katie couldn’t wait to be a part of a production of The Musical of Musicals (The Musical!). She has worked with local area theaters such as The American Century Theater and The Arlington Players. One of her biggest accomplishments is to fortunately be a part of the Shakespeare Theatre Company’s inaugural Young Company – an after school conservatory program for teens. For her final showcase, she created an adaptation of Romeo & Juliet, in which she played the Nurse. The production had the opportunity to take it abroad to the International Youth Theatre Festival in Parla, Spain. What Katie finds really interesting about The Musical of Musicals (The Musical!) is that it is broken up into five different vignettes, all with their own plot and characters. So while Katie’s role in each one remains June, she’s tasked with playing five completely different Junes – each with her own backstory, personality and mannerisms. This is much easier said than done. But Katie states that Director Susy Moorstein has been brilliant throughout the process, helping her find those distinctions of each individual June. 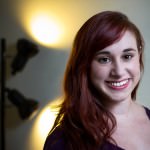 Caroline was most recently seen on the stage with Prince William Little Theatre as a Vixen in Dracula and as Gloria Rasputin in last summer’s production of Bye Bye Birdie. Other local area favorites are Tomfoolery with the Elden Street Players and Legally Blonde with the Reston Community Players. Throughout the audition process, Caroline discovered she really wanted to become more than only the choreographer. She wanted to perform in the show! She auditioned and Susy agreed! Now Caroline is excited to be comical on stage with this group of talented people. She loves the challenge of becoming different people within the ensemble, from a Midwestern townsperson to a speakeasy “slutty dancing girl.”  As a choreographer the show has also been a challenge because she has to choreograph in five different styles. I kind of set up a crash course on musical theatre choreography for myself, from Agnes deMille to Bob Fosse, before I even came up with a single step. Caroline believes that parody will only work if you are very familiar with the source material. Therefore, she did a lot of research and watching of videos to learn about all the different musicals that are riffed on throughout the show. The sense of camaraderie and community that exists between all the members of the cast and crew makes this production of The Musical of Musicals (The Musical!) distinctive. Everyone helps each other out and there are no divas or prima donnas which make for a welcoming environment for both veteran members and those who are brand new to our group. Caroline is confident that the cohesiveness and positive energy from the cast and crew will come out onstage – we will be having fun and therefore the audience will be too! 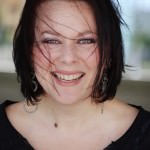 This is Ivy’s first production with Prince William Little Theatre. Most recent stage credit includes The King & I as Lady Thiang with Fauquier Community Theatre. Prior to her move to Virginia, Ivy has been seen all over the northern East Coast and Europe in favorites such as Godspell, Mame (Mame Dennis), Into the Woods (Cinderella), Company (Susan), Jekyll & Hyde (Lucy), Kiss Me Kate (Miss Lilli Vanessi/Kate), among many others. The Musical of Musicals (The Musical) seemed to Ivy like such a fun show with quirkiness and grit, and she wanted to be a part of something fresh and adventurous.  Ivy has heard so many positive comments and has seen a few of the PWLT shows (all fabulous), that she hopes to expand her theater family and contacts. She is so glad to have been given that opportunity! Ivy loves that her character, Abby, is always so dramatic and ‘over the top.’ Abby is such an enjoyable role with so many interesting facets about her. Ivy thinks that the director, Susy Moorstein, is a pleasure to work with. Susy has assisted Ivy with making the distinction of the same type of character through five different styles of Broadway composers. Ivy believes that this production of The Musical of Musicals (The Musical!) is special because it’s her debut show with PWLT, and also because of the wonderful cast and crew she’s had the opportunity to work with.

Prince William Little Theatre’s production of The Musical of Musicals (The Musical!) plays through July 27, 2014. Tickets are $25 for adults and $20 for students, seniors and groups of 10 or more. Tickets can be purchased online through the Hylton Performing Arts website, or at the door. For more information, please visit the PWLT’s website at www.PWLT.org. 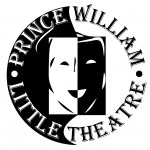